This page describes preparation of perfumes (gandhayukti) which is the seventy-seventh Chapter of the English translation of the Brihat-samhita. This work, written by Varahamihira in the 6th century, is classified as jyotisha literature, also known as Indian astronomy. It contains however, also content regarding astrology, palmistry, agriculture, gardening, perfumes, medicines and various other encyclopedic topics.

1. To a person whose hair are white, flower wreaths, sandal paste, perfumed smoke, clothes and jewels can give no beauty. It is therefore necessary to blacken and embellish the hair. The same attention shall be paid to it as the collyrium and jewels.

2. Put into an iron vessel vinegar or the like sour liquor; put in it a quantity of the Kodrava[1] grain after removing the husk and iron dust; heat the mixture; grind it well on a stone; rub it over the hair of the head freed from oil; tie over the hair the moist leaves of the green juicy leaves; remain so for six hours.

3. Then remove the mixture from the hair, and rub over them the paste of the fruit of the Āmalaka (Emblic myrobolam); cover them with moist leaves as before and remain so for another six hours; bathe as prescribed below; the hair will become black.

[Note—The commentator advises the application of the mixture to shaven heads.]

4. Then bathe in waters prepared for the purpose; rub over the hair fragrant oil, thus removing the disagreeable scent of the mixture; the pleasures of royalty may then be enjoyed by a king by means of various kinds of perfumes.

5. Mix together equal quantities of woody cassia, costus, Reṇu, Nalikā, Spṛkkā, Tagara, Vālaka, Keśara and Patra and grind them on a stone forming them into a paste; rub it over the head and then bathe; such a bath is suited to kings.

6. Mix together in oil the powder of Mañjiṣṭhā, Vyāghranakha, Śukti, cinnamon, Kuṣṭha and Myrrh; heat the mixture in the Sun. It is known as Campakagandhi oil.

8. Mix together one-fourth parts of Śatapuṣpa and Kunduruka, half parts of Nakha and Turuṣka, and one part of sandal and Priyaṅgu; grind them well and expose the mixture to the smoke of Guḍa and Nakha. You will then get an excellent perfume.

9. Grind together equal quantities of Jaṭāmāṃsī, Vālaka, Turuṣka, Nakha and sandal and form a paste; expose it to the smoke of Bdellium, Bālaka, lac, Musta, Nakha and Śarkarā.

10. One part of Harītakī, 2 parts of Śaṅkha, 3 parts of Ghana, 4 parts of Drava, 5 pans of Ambu, 6 parts of Guḍa, 7 parts of Utpala. 8 parts of Śailaka and 9 parts of Musta give you a perfume. Numerous kinds of perfumes may be similarly prepared by mixing together different parts of each substance.

[Notes:—The text gives an instance of the proportion in which the ingredients are to be mixed. Similarly, of the 9 substances we can take from 1 to 9 parts of each, and no mixture ought to contain the same number of parts of any two substances. The question is to find the number of different varieties of mixtures. Suppose the nine substances to be represented by the nine letters from A to I, the proportion of the parts being from 1 to 9. As each substance may be taken from 1 to 9 parts and as no two substances shall be taken the same number of parts, the number of mixtures required is the number of ways in which the figures from 1 to 9 may be written under the letters from A to I. This is the number of permutations of 9 things taken altogether, which is equal to 1x2x3x4x5x6x7x8x9 = 362880. The Stanza gives us therefore 362880 different varieties of perfumes.]

11. Mix together 4 parts each of Sita, Śaila and Musta, 2 parts each of Śrī and Sarja, and one part each of Nakha and Bdellium, grind them all on a stone with honey; add to the mixture, camphor. You will then get a perfume known as Kopacchada (destroyer of anger) fit only for kings.

12. Mix together Cinnamon, Uśīra and Patra one part each, and Sūkṣmaila half a part; powder them well; add to the mixture equal parts of musk and camphor. You will get an excellent perfume.

13-14. Of the 16 substances—Ghana, Vālaka, Śaileyaka, Karpūra, Uśīra, Nāgapuṣpa, Vyāghranakha, Spṛkka, Agaru, Madanaka, Nakha. Tagara, Dhānya, Karcūra, Cola and Sandal, any four mixed in the proportion of 1, 2, 3, and 4 parts will form a perfume. As the number of four substances out of 16 is large and as each of the four substances may be mixed from 1 to 4 parts, the number of mixtures will be very large. The process is known as Gandhārṇava—ocean of perfumes.

15. Dhānya and Karpūra being substances of strong scent, a part of the former and a little less than a part of the latter shall be added—these two substances shall never be mixed in 2, 3, or 4 parts.

[Notes—The above number has been obtained on the supposition that the two substances Dhānya and Karpūra enter into the mixtures in 2, 3 and 4 parts also, which however is not the case. The actual number will therefore be less than the number stated above. We shall first explain how the number was arrived at by the author, pointing out an error committed by him which has permanently crept into the text and then find out the actual number of mixtures under the conditions given.

In the chapter on combinations in Algebra, we learn that the number of combinations of n things taken r at a time.

We shall show his error by actually putting down the proportions of the various mixtures. 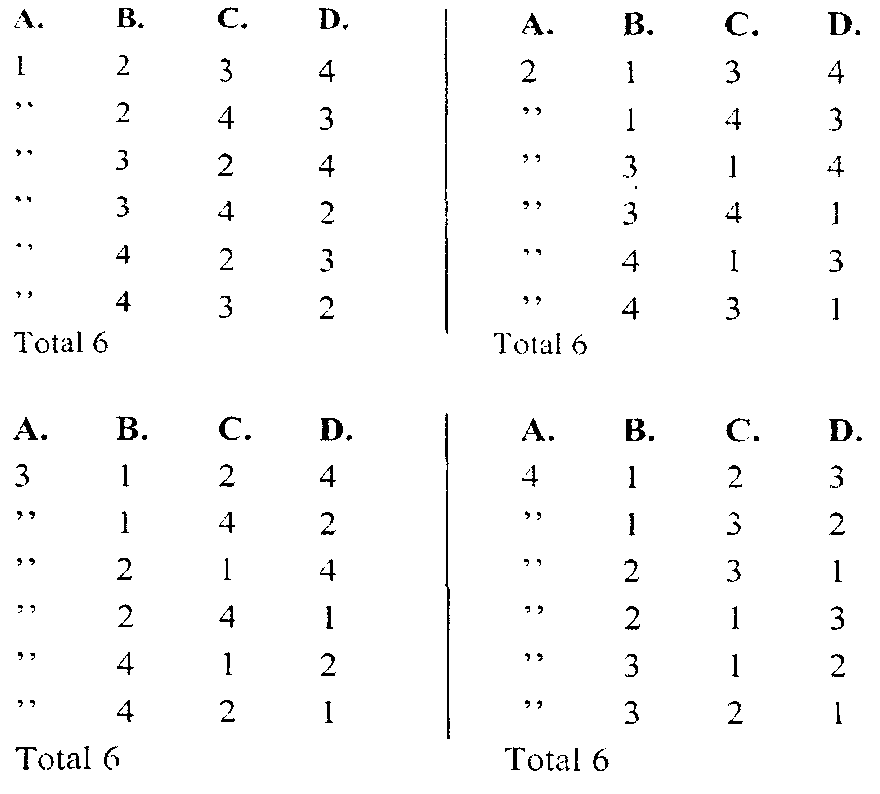 In all 24 varieties for each set. 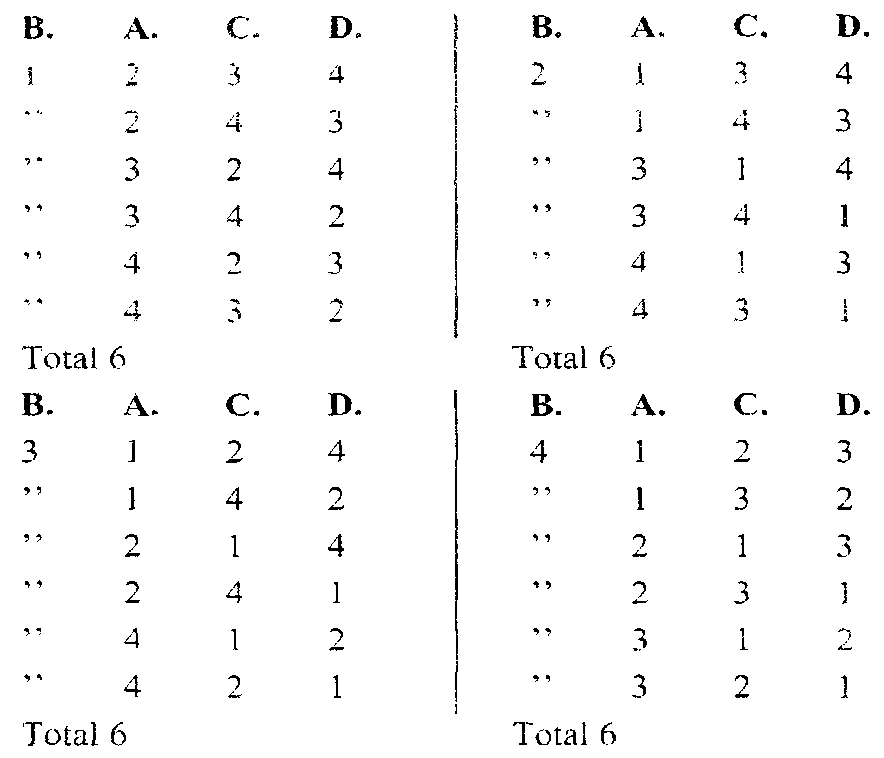 In all 24 varieties beginning with the several parts of B. Now comparing these with the 24 varieties already given, it will be found that the two lists are identically the same. So that 4 substances mixed in the proportion of 1, 2, 3, 4 parts each, give us only 24 mixtures, and not 96. Therefore, the total number of mixtures is 24x1820 = 43680 and not 96x1820 or 174720 as stated by the author. It is strange that Utpala, the commentator, has not noticed the error.

As two of the 16 substances do not enter into the mixtures in 2, 3 and 4 parts, we will find the actual number of varieties under the conditions given—a point which the author has omitted. Keeping aside the two substances, the number of sets of four substances out of 14 is the number of combinations of 14 things taken 4 at a time.

Again the number of 3 substances out of 14:

Adding to the same a little less then a part of Karpūra we get 2184 mixtures of 4 substances———(III).

Now as under the conditions of the case no two substances shall enter into a mixture in the same number of parts, and as the two substances Dhānya and Karpūra are only to be added in one part each; it is evident that these two do not enter into a mixture together—otherwise we shall have to find out the number of sets of 2 substances out of 14 and the number of mixtures of each set, each substance being taken from 2 to 4 parts and to each mixture thus obtained add a mixture of one part of Dhānya and a little less than a part of Karpūra. Such however does not appear to be the object of the author. He evidently wants that each mixture shall contain 10 parts.

22. Beginning from unity form several series of numbers by adding together each figure with the next and the sum with the next and so on omitting only the last, the last of the senes will represent the number of combinations required.

and so on. The number of combinations, therefore, of 7 things taken 4 together is the last number of the 4th series, viz., 35.

The above may appear to be a somewhat clumsy process. Bhāskara in his Lilāvatī (Arithmetic) gives the identical rule now found in Western works on Algebra. He says: Form fractions with the figures, say, from 7 to 1 for numerators, and from 1 to 7 for denominators thus:

25. Each set of four substances may be mixed in all possible ways in the parts mentioned—the number of parts being always eighteen in the case of each mixture. The mixtures form perfumes, ointment and the like.

[Note:—As before. each set of four substances will give 24 varieties of mixtures.]

26. To the mixtures mentioned above, add equal parts of Nakha, Tagara, Turuṣka, nutmeg, camphor and musk and expose them to the smoke of Guḍa and Nakha. You will get what are known as Sarvatobhadra perfumes.

27. If, to the same mixtures, you add equal parts of nutmeg, musk and camphor, and drench the resulting mixtures in Sahakāra and honey, you will again get what are known as Sarvatobhadra perfumes.

28. Whenever the substances Sarjarasa and Śrīvāsaka are mentioned with other substances for giving perfumed smoke, remove the two and use instead Vālaka and cinnamon. The resulting mixture will serve for bath.

29-30. Mix together any three out of the nine substances, Lodhra, Uśīra, Nata, Aguru, Musta, Patra, Priyaṅgu, Vana and Patthya. Add to the mixture one part of Sandal, one part of Taruṣka, half a part of Nakha and a quarter part of Śatapuṣpa; expose the mixture to the smoke of Kaṭuka, Hiṅgula and Guḍa; we thus get 84 different varieties of mixtures.

31. Allow the tooth-brush[2] to soak in the urine of the cow mixed with the powder of Harītakī for seven days. Then put it in fragrant water prepared as described below.

32. Fragrant water shall be prepared with cardamom, cinnamon. Patra, Añjana, honey, Marica, Nāgapuṣpa and Kuṣṭha and allow the tooth-brush to remain in the water till it becomes fragrant.

33. Mix together the powder of 4 parts of nutmeg, 2 parts of Patra, and one part of cardamom and camphor; smear it over the tooth-brush and dry it in the sun.

34. Tooth-brush prepared as stated above shall be used by the Brāhmaṇas, the Kṣatriyas, and the Vaiśyas only. By its use, the appearance of a person will become bright, his countenance will become agreeable, his mouth pure and of good smell, and his voice sweet.

37. If the leaves exceed their measure at night or the nut exceed its measure by day the effect will be good; if the case be otherwise, the Tāmbūla will not be found sweet. If the Ṭāmbūla contain as its ingredients Kakkola, Arecanut, Lavalīphala and Pārijāta, it will exhilarate the spirit and excite sexual passion.

For an explanation of the various botanical terms occurring in this chapter the reader is referred to the Glossary at the end.

This is a piece of stick or small twig of particular trees (vide chapter 85) used as tooth-brush.