This is the English translation of the Brihat-samhita, one of the fundamental works of ancient Indian astronomy (known as Jyotisha). It was written in the 6th century A.D. (or 1st century B.C.) in about 4000 Sanskrit verses (slokas) by the polymath known as Varahamihira, who was considered as a great scientific scholar of mathematics, astronomy and...

Varaha Mihira was a native of Avanti and the son of Adityadasa who was an astronomer and from whom he received his education as he himself tells us in his Brihat Jataka (Chap. XXVI Verse 5). The date of his birth is involved in obscurity. It is the practice of all the Hindu astronomers to give this information in their works on astronomy; but unfortunately Varaha Mihira’s work on astronomy, known as the Panchasidhantika, is now lost[1] beyond all hope of recovery. The popular notion is that he was one of the 12 gems of the Court of Vikramarka. Now Vikrama Era, as we find from the Hindu calendar, dates from 56 B. C. whereas Varaha Mihira is considered to have flourished in the sixth century after Christ. So the Vikramarka of the first century before Christ must be different from the Vikramarka of the 6th century after Christ, unless we go to the length of believing that Vikramarka reigned, according to the Hindu legend, for a thousand years. We are not without parallel instances in the Christian Bible in which Enos is said to have lived 905 years, Cainan 910 years, Seth 912 years, Adam 930 years, Noah 950 years, Jared 962 years and Methusala 969 years; and yet poor non-biblical Vikramarka is grudged a comparatively small matter of 500 years.

Now A. D. 505 is considered by some to be the date of Varaha Mihira’s birth and by others to be that of his Panchasidhantika, and A. D. 587 is thought to be the date of his death. It is also said that Varaha Mihira has quoted from Aryabhatta; that Aryabhatta was born in 476 A. D. and that this circumstance goes to prove that the dates given above are probably not incorrect. We shall now examine how far these dates are supported by evidence to be obtained from Varaha Mihira’s own works—a circumstance which, curiously enough, appears to have escaped the attention of even such eminent scholars as Colebrook, Davis, Sir William Jones and others:

In verse 2 of Chapter III of his Brahat Samhita Varaha Mihira says:—

This amounts to saying that the Vernal equinox, which is midway between the Solstices (90° from each), was at the commencement of Mesha (Sign Aries) i.e. coincided with the Star Revati where the fixed Hindu Zodiac commences. The precession of the equinoxes was known to the Hindus long before it was known to the Europeans, although Hindu astronomers are not agreed as to the nature of its course—some asserting that it oscillates on both sides of the star Revati while others that it makes a complete revolution round the heavens, a point about which even European astronomers have not arrived at any conclusion. Now this point is at present about 20° to the west of the star Revati. Its annual rate of motion is known and the increment in the rate is also known; so that by a process of simple calculation we can arive at the period when the point must have coincided with the star Revati. Now unfortunately, the exact distance between the Vernal Equinox and the star Revati is not known, and cannot be determined from observation as the star (which the Hindu astronomers say was on the ecliptic) appears some how to have disappeared. Mr. Kero Latchmana Chatrai M. A. of Poona has adopted a star, known as the Zeeta Piscium (which however is not on the ecliptic) as the Revati of the Hindus. According to him the Ayanamsam, (the distance between the vernal Equinox and the star Revati), on the first January 1883 was 18° 14' 20". According to the late Mr. C. Reghunathachariar of Madras, (after him, Messrs. Vencateswara Deekshitar and Sundereswara Srouthy of Southern India) and Mr. Bapu Deva Sastry of Benares, the Ayanamsam on the 1st January 1883, was 22° 2' 39" and 21° 58' 29" respectively. But as these lengths have been arbitrarily assumed they may be dismissed as deserving of no consideration in this place, I have discovered it to be 20° 24' 15" on the above date and my discovery rests on the Druva Nadi, a work of Satyachariar, a great astronomer. For particulars of this disputed question the reader is referred to my article on the Hindu Zodiac published in the April (1883) issue of The Theosophist.

Now we will calculate Varaha Mihira’s time from the lengths of the Ayanamsam as adopted by Mr. K. L. Chatrai and as discovered by me. The question is one of Arithmetical progression. We will suppose,

a = rate of motion of Vernal Equinox when it coincided with the star Revati.
d = the annual increment in the rate.
l = the last term or rate of motion on the first January 1883.
s = the sum of the terms or the length of the Ayanamsam.
n = number of terms or number of years required.

We have the following series: 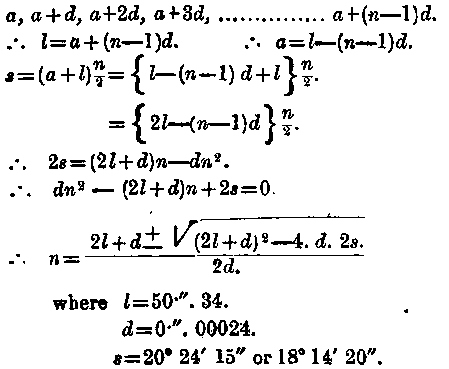 Substituting these values, we get n= 14,66 and 4,17,368 years, or = 1310 and 4,17,523 years, before first January 1883 where the bigger figures may be rejected as they refer to the position of the vernal Equinox in its second revolution. So that Varaha Mihira’s time is found to be either 1882-1466= 416 A.D. or 1882-1310=572 A.D., according to me or Mr. K. L. Chatrai respectively. Now it is true that 572 A.D. is in support of the supposed dates, above given, of Varaha Mihira’s birth and death. But I cannot bring myself to believe that Zeeta piscium was the Revati of the Hindus, for this simple reason that it is not on the ecliptic. Several stars of comparatively less importance, stated by the Hindu astromomers to be on the ecliptic are found to be so when examined with the aid of modern astronomical instruments. It is therefore unreasonable to suppose that Hindu astronomers could have blundered in describing the position of the star Revati. As regards the difficulty that Varaha Mihira has quoted from Arya Bhatta—which quotation must be in his Panchasidhantika now lost—it is not improbable that the quotation is from Vridharya bhateeam.

It may be remarked here that when, in his work on Samhita, Varaha Mihira refers to the position of the planets in the several signs of the zodiac, he refers to the fixed zodiac of the Hindus commencing from the star Revati and not to the shifting zodiac of the western astronomers which always commences at the moving vernal Equinox.

The whole book is one huge attempt to interpret the language of Nature and ascertain its bearing on the fortunes of men and nations. Where the lapidary discovers a diamond, the simple negro finds a piece of glass; where the botanist discovers a simple with valuable properties the farmer sees a thistle. Nature has been found to speak in a thousand ways at every moment of time and the Hindus from the earliest times have learnt to hear and understand her language. This language, the modern scientific world, at present ignores, and with the simplicity of a negro or a farmer can even afford to laugh at the supposed ignorance of the Hindus. “What is truth? asked jesting Pilate, but would not wait for an answer”. They have not the patience to try and see what amount of truth there is in the Hindu interpretation of Nature’s language.

We will take a few instances: over 1590 years ago Varaha Mihira (who only quotes the opinion of writers that went before him) said that solar spots indicate famine in the land. This was found to be the case during the famine of 1876-77.

Again it is generally known that all India observe anxiously the course of the moon with respect to the four stars of the 10th constellation (Magha) when the sun is in the sign Aquarius i.e. from about February 10 to March 10, with a view to ascertain the future agricultural prospects of the land: the market price of food-grains is at once lowered or raised according as the moon’s course lies to the south of the four stars or more and more to the north of the southernmost star. It is also stated that if the moon should pass to the north of all the four stars the world would be at an end.

Now astronomers know very well that ordinarily the moon will never pass to the north of all the four stars, I may also remark here that in the famine of 1876-77 the moon’s course lay between the northern most star and the one next to it. We will cite one more instance.

Hindu astronomers say that if Saturn should enter the constellation of Rohini (4th) the world would be at an end. The story is that the astronomers of Dasaratha’s court announced to the prince the dreaded entry of Saturn into the said constellation that the prince at once flew in the air and stood before Saturn in his orbit resolved to stop his course; that Saturn, pleased with the prince’s boldness, promised never more to enter the circle. Now, astronomical calculations shew that ordinarily Saturn will never enter the said circle,—a circumstance which shows that the story is simply intended to cover an astronomical truth. It is a well-known fact that recently Saturn approached the circle to within a degree from it but did not enter it.

In justice to the wisdom of the ancient Hindus, who, for ages, continued their observation and tabulation of the phenomena of nature, the public will do well to give each matter a patient trial and see what amount of truth there is in each and not follow the wisdom of Alexander the Great who, unable to untie the Gordian knot, chose to cut it. In the course of this work the reader will find that the author refers to several phenomena which, within the limited experience of the modern scientific world might appear improbable. True wisdom consists in patient investigation and not in hasty rejection.

It is humbly hoped that, if this book were carefully studied and its truths practically examined, the material prosperity of the world would be vastly improved.

Our subscribers, especially those of N. W. P. and Bengal, are requested to give the matter some attention and try if they can procure a copy of this excellent work.