Photo 2 of 29 in Gallery: The Thakali (ethnic group) 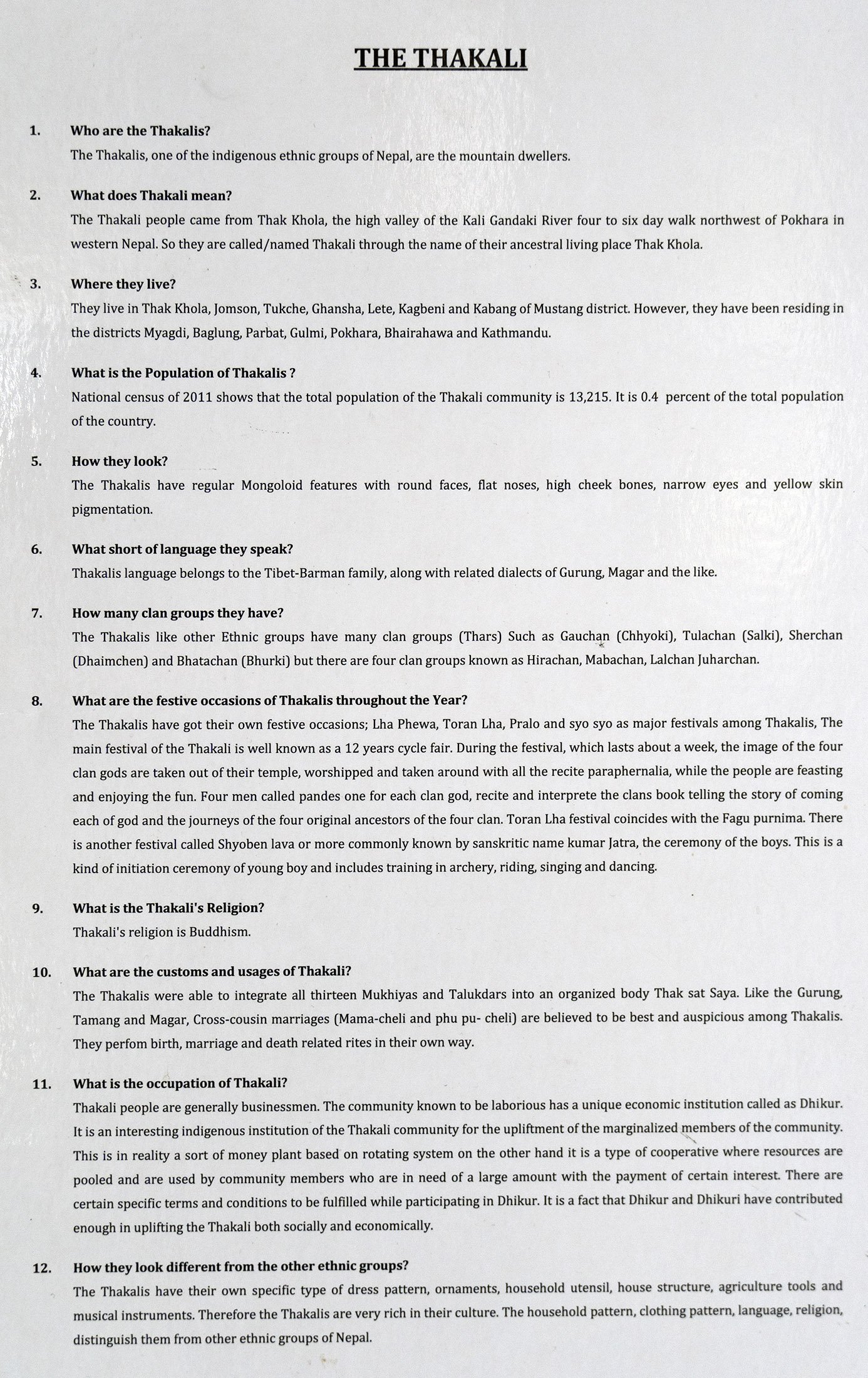 The Thakali are an indigenous ethnic group of Nepal. Alternative spelling: थकाली (thakālī). The following museum exhibitions are from the International Mountain Museum in Pokhara.

The Thakalis, one of the indigenous ethnic groups of Nepal, are the mountain dwellers.

2. What does Thakali mean?

The Thakali people came from Thak Khola, the high valley of the Kali Gandaki River four to six day walk northwest of Pokhara in western Nepal. So they are called/named Thakali through the name of their ancestral living place Thak Khola.

They live in Thak Khola, Jomson, Tukche, Ghansha, Lete, Kagbeni and Kabang of Mustang district However, they have been residing in the districts Myagdi, Baglung, Parbat, Gulmi, Pokhara, Bhairahawa and Kathmandu.

4. What is the Population of Thakalis ?

6. What short of language they speak?

Thakalis language belongs to the Tibet-Barman family, along with related dialects of Gurung, Magar and the like.

7. How many clan groups they have?

8. What are the festive occasions of Thakalis throughout the Year?

The Thakalis have got their own festive occasions; Lha Phewa, Toran Lha, Pralo and syo syo as major festivals among Thakalis, The main festival of the Thakali is well known as a 12 years cycle fair. During the festival, which lasts about a week, the image of the four clan gods are taken out of their temple, worshipped and taken around with all the recite paraphernalia, while the people are feasting and enjoying the fun. Four men called pandes one for each clan god, recite and interprete the clans book telling the story of coming each of god and the journeys of the four original ancestors of the four clan. Toran Lha festival coincides with the Fagu purnima. There is another festival called Shyoben lava or more commonly known by sanskritic name kumar jatra, the ceremony of the boys. This is a kind of initiation ceremony of young boy and includes training in archery, riding, singing and dancing.

9. What is the Thakali's Religion?

10. What are the customs and usages of Thakali?

The Thakalis were able to integrate all thirteen Mukhiyas and Talukdars into an organized body Thak sat Saya. Like the Gurung, Tamang and Magar, Cross-cousin marriages (Mama-cheli and phu pu-cheli) are believed to be best and auspicious among Thakalis. They perfom birth, marriage and death related rites in their own way.

11. What is the occupation of Thakali?

Thakali people are generally businessmen. The community known to be laborious has a unique economic institution called as Dhikur. It is an interesting indigenous institution of the Thakali community for the upliftment of the marginalized members of the community. This is in reality a sort of money plant-based on rotating system on the other hand it is a type of cooperative where resources are pooled and are used by community members who are in need of a large amount with the payment of certain interest There are certain specific terms and conditions to be fulfilled while participating in Dhikur. It is a fact that Dhikur and Dhikuri have contributed enough in uplifting the Thakali both socially and economically.

12. How they look different from the other ethnic groups?

The Thakalis have their own specific type of dress pattern, ornaments, household utensil, house structure, agriculture tools and musical instruments. Therefore the Thakalis are very rich in their culture. The household pattern, clothing pattern, language, religion, distinguish them from other ethnic groups of Nepal.