Photo 2 of 41 in Gallery: The Sherpa (ethnic group) 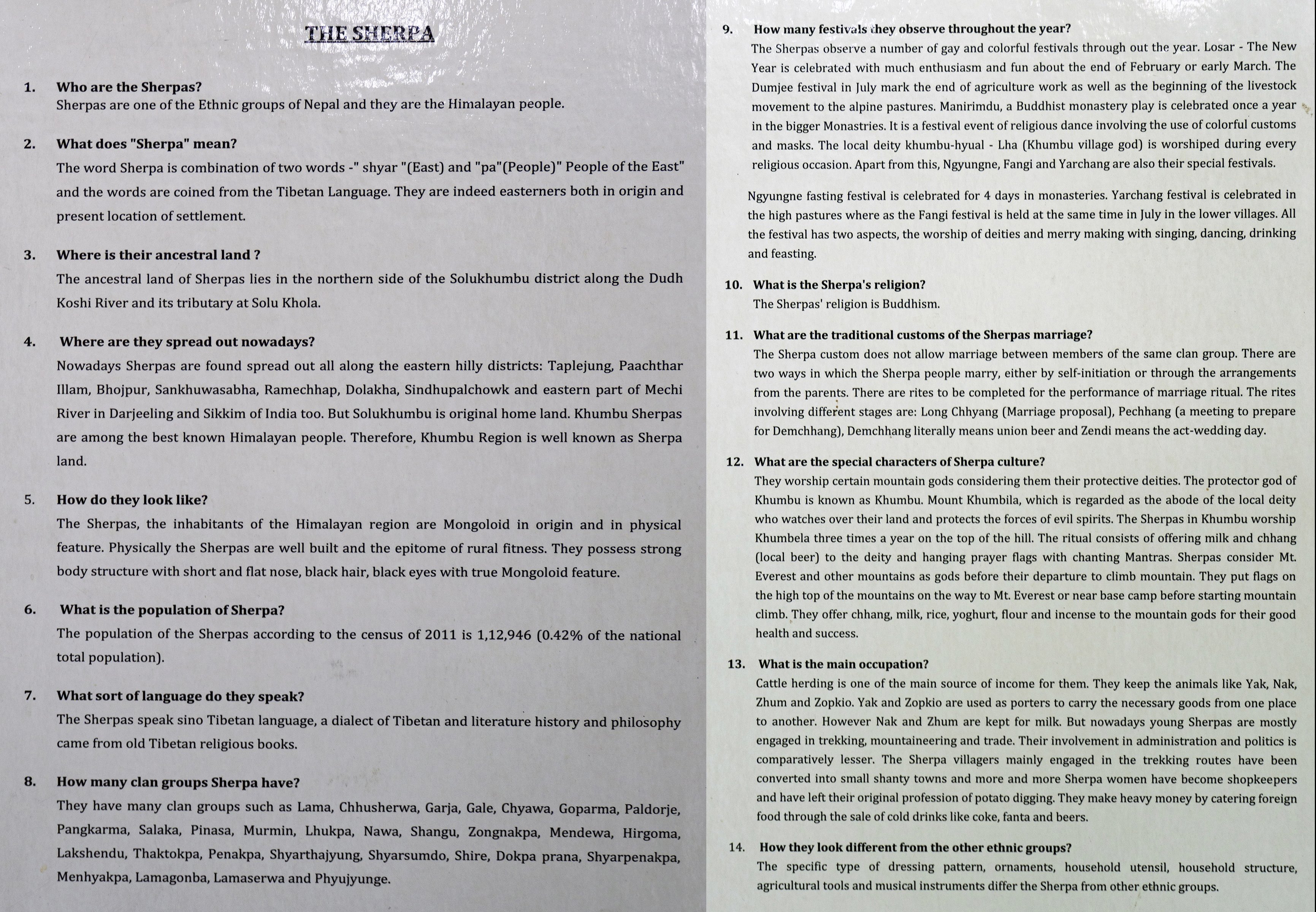 Sherpas are one of the Ethnic groups of Nepal and they are the Himalayan people.

The word Sherpa is combination of two words—“shyar” (East) and “pa” (People) “People of the East” and the words are coined from the Tibetan Language. They are indeed easterners both in origin and present location of settlement.

3. Where is their ancestral land ?

The ancestral land of Sherpas lies in the northern side of the Solukhumbu district along the Dudh Koshi River and its tributary at Solu Khola.

4. Where are they spread out nowadays?

Nowadays Sherpas are found spread out all along the eastern hilly districts: Taplejung, Paachthar Illam, Bhojpur, Sankhuwasabha, Ramechhap, Dolakha, Sindhupalchowk and eastern part of Mechi River in Darjeeling and Sikkim of India too. But Solukhumbu is original home land. Khumbu Sherpas are among the best known Himalayan people. Therefore, Khumbu Region is well known as Sherpa land.

The Sherpas, the inhabitants of the Himalayan region are Mongoloid in origin and in physical feature. Physically the Sherpas are well built and the epitome of rural fitness. They possess strong body structure with short and flat nose, black hair, black eyes with true Mongoloid feature.

6. What is the population of Sherpa?

7. What sort of language do they speak?

8. How many clan groups Sherpa have?

9. How many festivals they observe throughout the year?

The Sherpas observe a number of gay and colorful festivals through out the year. Losar—The New Year is celebrated with much enthusiasm and fun about the end of February or early March. The Dumjee festival in July mark the end of agriculture work as well as the beginning of the livestock movement to the alpine pastures. Manirimdu, a Buddhist monastery play is celebrated once a year in the bigger Monastries. It is a festival event of religious dance involving the use of colorful customs and masks. The local deity khumbu-hyual—Lha (Khumbu village god) is worshiped during every religious occasion. Apart from this, Ngyungne, Fangi and Yarchang are also their special festivals.

10. What is the Sherpa’s religion?

The Sherpas’ religion is Buddhism.

11. What are the traditional customs of the Sherpas marriage?

The Sherpa custom does not allow marriage between members of the same clan group. There are two ways in which the Sherpa people marry, either by self-initiation or through the arrangements from the parents. There are rites to be completed for the performance of marriage ritual. The rites involving different stages are: Long Chhyang (Marriage proposal), Pechhang (a meeting to prepare for Demchhang), Demchhang literally means union beer and Zendi means the act-wedding day.

12. What are the special characters of Sherpa culture?

They worship certain mountain gods considering them their protective deities. The protector god of Khumbu is known as Khumbu. Mount Khumbila, which is regarded as the abode of the local deity who watches over their land and protects the forces of evil spirits. The Sherpas in Khumbu worship Khumbela three times a year on the top of the hill. The ritual consists of offering milk and chhang (local beer) to the deity and hanging prayer flags with chanting Mantras. Sherpas consider Mt. Everest and other mountains as gods before their departure to climb mountain. They put flags on the high top of the mountains on the way to Mt. Everest or near base camp before starting mountain climb. They offer chhang, milk, rice, yoghurt, flour and incense to the mountain gods for their good health and success.

13. What is the main occupation?

Cattle herding is one of the main source of income for them. They keep the animals like Yak, Nak, Zhum and Zopkio. Yak and Zopkio are used as porters to carry the necessary goods from one place to another. However Nak and Zhum are kept for milk. But nowadays young Sherpas are mostly engaged in trekking, mountaineering and trade. Their involvement in administration and politics is comparatively lesser. The Sherpa villagers mainly engaged in the trekking routes have been converted into small shanty towns and more and more Sherpa women have become shopkeepers and have left their original profession of potato digging. They make heavy money by catering foreign food through the sale of cold drinks like coke, fanta and beers.

14. How they look different from the other ethnic groups?