Photo 2 of 35 in Gallery: The Magars (ethnic group) 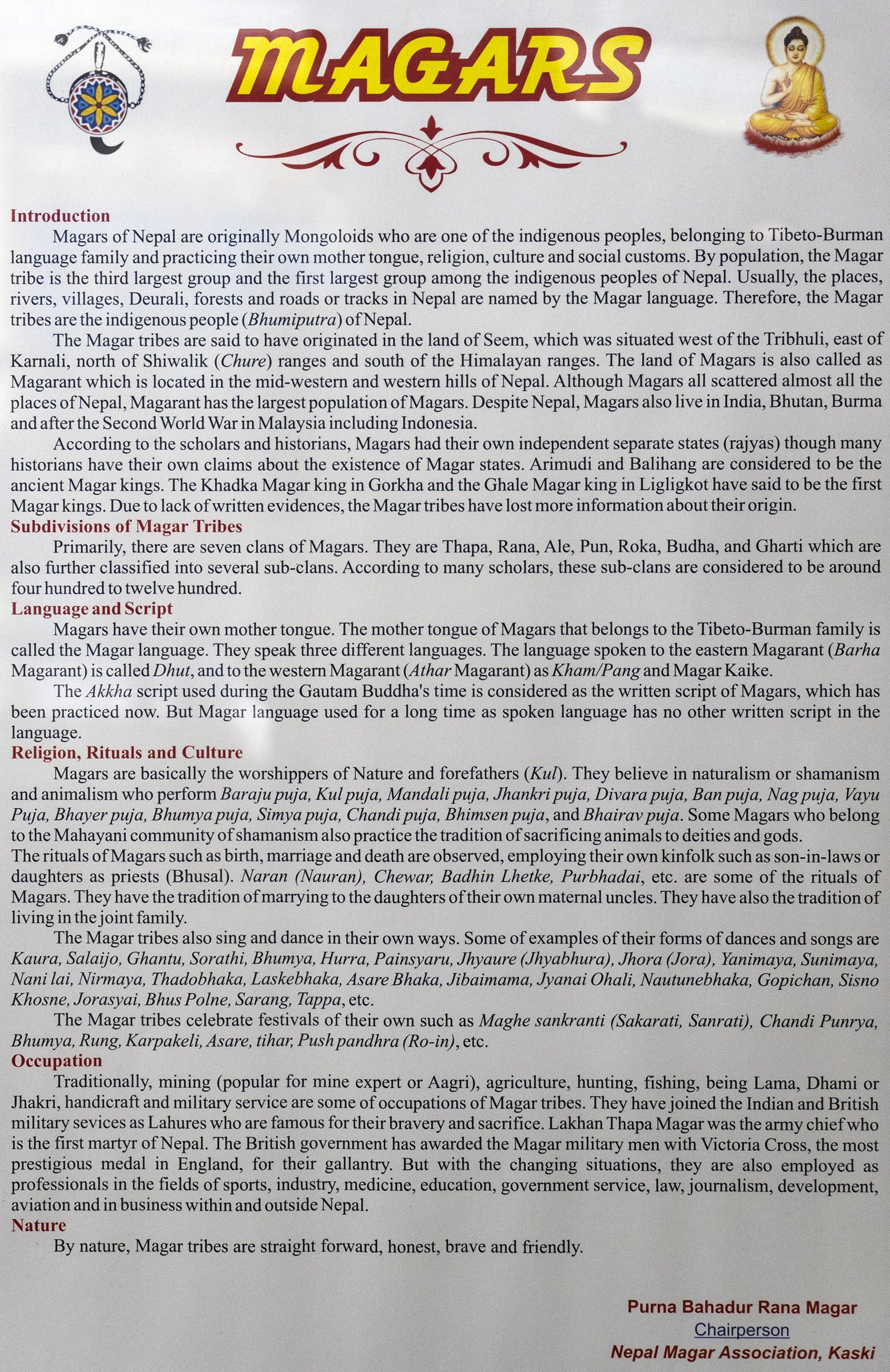 The Magar tribes are said to have originated in the land of Seem, which was situated west of the Tribhuli, east of Karnali, north of Shiwalik (Chure) ranges and south of the Himalayan ranges. The land of Magars is also called as Magarant which is located in the mid-western and western hills of Nepal. Although Magars all scattered almost all the places ofNepal, Magarant has the largest population of Magars. Despite Nepal, Magars also live in India, Bhutan, Burma and after the Second World War in Malaysia including Indonesia.

According to the scholars and historians, Magars had their own independent separate states (rajyas) though many historians have their own claims about the existence of Magar states. Arimudi and Balihang are considered to be the ancient Magar kings. The Khadka Magar king in Gorkha and the Ghale Magar king in Ligligkot have said to be the first Magar kings. Due to lack of written evidences, the Magar tribes have lost more information about their origin. Subdivisions of Magar Tribes

Primarily, there are seven clans of Magars. They are Thapa, Rana, Ale, Pun, Roka, Budha, and Gharti which are also further classified into several sub-clans. According to many scholars, these sub-clans are considered to be around four hundred to twelve hundred.

The Akkha script used during the Gautam Buddha’s time is considered as the written script of Magars, which has been practiced now. But Magar language used for a long time as spoken language has no other written script in the language.

The rituals of Magars such as birth, marriage and death are observed, employing their own kinfolk such as son-in-laws or daughters as priests (Bhusal). Naran (Nauran), Chewar, Badhin Lhetke, Purbhadai, etc. are some of the rituals of Magars. They have the tradition of marrying to the daughters of their own maternal uncles. They have also the tradition of living in the joint family.

Traditionally, mining (popular for mine expert or Aagri), agriculture, hunting, fishing, being Lama, Dhami or Jhakri, handicraft and military service are some of occupations of Magar tribes. They have joined the Indian and British military sevices as Lahures who are famous for their bravery and sacrifice. Lakhan Thapa Magar was the army chief who is the first martyr of Nepal. The British government has awarded the Magar military men with Victoria Cross, the most prestigious medal in England, for their gallantry. But with the changing situations, they are also employed as professionals in the fields of sports, industry, medicine, education, government service, law, journalism, development, aviation and in business within and outside Nepal.