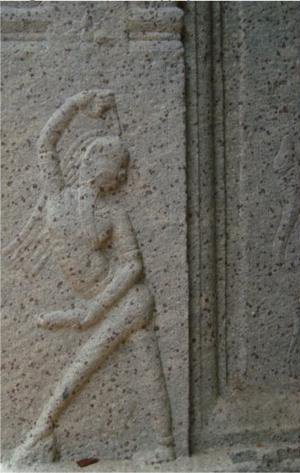 From Fig.129 to Fig.138, all are found in the outer prakara pillars of the Adikeshava Perumal temple at Tiruvattariu in Kanniyakumari dist. of Tamilnadu

Fig. 135 to Fig. 137: in this sculpture, the yogic practitioner in a parshvottasana is shown as he is holding his erect penis in his left hand and showing his right hand index finger on his head where the sahasrara is located. He is shown with long hair, big moustache, and a medallion on his chest.

Fig. 136: This sculpture is same as Fig.135 and 137 in which he is in a parshvottasana. But on his left side a snake is shown as it is rising upward. Thus from the above representations, we may think that these sculptures clearly depict the practice of kundalini yoga, in which the snake is shown for the raising of kundalini and the fingers indicating the lower part of the body (buttocks)–the starting point of the kundalini power and also the top of the head where the sahasrara, the final destination point of the kundalini is. Many sculptures of this same kind are found in the same prakara of this temple as well as in the Tanumalaya Perumal temple a Sucindram in Kanniyakumari dist. of Tamilnadu.

The Siddha/Natha tradition symbolize the most comprehensive understanding and application of the theoretical and methodological tenets of Tantric philosophy. There are many Siddha-centres all over the Tamilnadu. The temples in Tamil-Nadu contain the sculptures depicting the Tantric rites and the images of the venerated Siddhas in it.