Photo 19 of 223 in Gallery: Siddha Cult in Tamilnadu 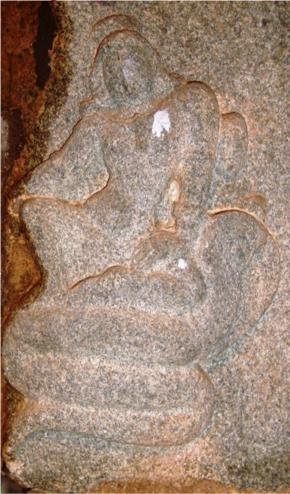 From Fig.14 to Fig.22, the Navanathas are depicted in the ardhamandapa wall of the Someshvara temple at Ulsur near Bangalore which belongs to the post Vijayanagara period, probably constructed by the Gowdas during 16th -17th century. All the nine Nathas are depicted in a single line continuously along with their vehicles, from left to right respectively tortoise, Vyali, lion, fish, scorpion, deer, boar, snake and tiger which is the unique feature of this temple.

The Siddha/Natha tradition symbolize the most comprehensive understanding and application of the theoretical and methodological tenets of Tantric philosophy. There are many Siddha-centres all over the Tamilnadu. The temples in Tamil-Nadu contain the sculptures depicting the Tantric rites and the images of the venerated Siddhas in it.