Sculptures in temples in Kumbakonam: photo 438

Photo 438 of 640 in Gallery: Sculptures in temples in Kumbakonam 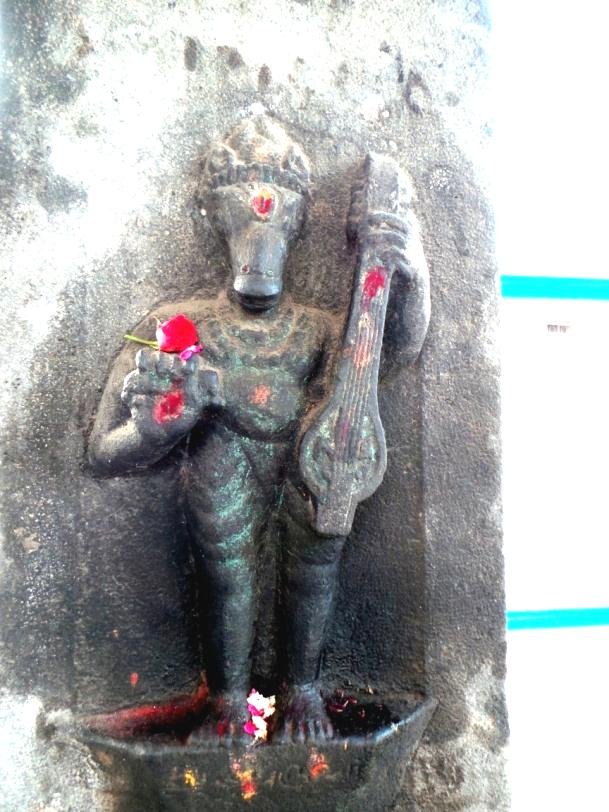 This is a sculpture of Tumburu a great devotee of Visnu. In Hindu mythology, he is the best among Gandharvas or celestial musician and is sometimes described as the best of singers. He is described to perform in the courts of gods Kubera and Indra as well as sing praises of god Visnu. He leads the Gandharvas in their singing. Tumburu is often portrayed horse-faced. He holds the instrument Vina that he plays as he sings. In another hand, he holds wooden cymbals, that he beats to maintain the rhythm. A South Indian legend records that Tumburu performed severe austerities and pleased god Siva. Tumburu asked Siva to grant him a horse-face, immortality, liberty to travel the universe, skill in music and singing and ability to reside with and serve Siva. Siva blessed him and granted the boons that he sought. In the above sculpture he is shown holding a Vina with his left hand and his right hand is in Sandamsa also called Jnana Mudra. He is in Brahma Sthana.