Photo 113 of 140 in Gallery: Early Indian narrative art of Bharhut 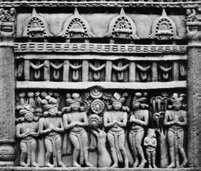 Figure 113:—Outer panel on the eastern pillar of the northern gateway depicting the cankrama with the recurring representations of the bodhi tree with large clusters of flowers, Stupa I, Sanci, c. 1st century BCE. (Photograph by the author).