Photo 52 of 140 in Gallery: Early Indian narrative art of Bharhut 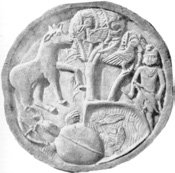