Photo 34 of 140 in Gallery: Early Indian narrative art of Bharhut 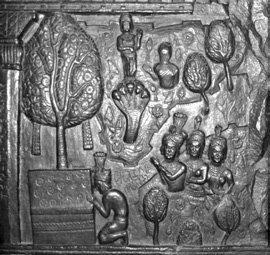 Figure 34:—Panel on the Prasenajit Pillar depicting the story of Elapatra Nagaraja, who (along with nagis) in the anthropomorphic form with a serpent crest head dress is worshipping an empty seat under a shiri̅sha tree, Bharhut, Bharhut Gallery, Indian Museum, Kolkata. (Photograph by the author).