Yuvati means something in Hinduism, Sanskrit, Buddhism, Pali, Marathi, Hindi, biology. If you want to know the exact meaning, history, etymology or English translation of this term then check out the descriptions on this page. Add your comment or reference to a book if you want to contribute to this summary article. 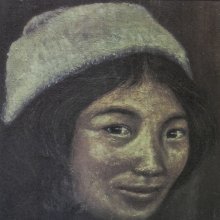 Yuvati (युवति) refers to “young women”, according to the Bṛhatsaṃhitā (chapter 15) (“On the nakṣatras—‘asterisms’”), an encyclopedic Sanskrit work written by Varāhamihira mainly focusing on the science of ancient Indian astronomy astronomy (Jyotiṣa).—Accordingly, “Those who are born on the lunar day of Pūrvaphālguni will delight in dance, in young women (yuvati-subhaga), in music, in painting, in sculpture and in trade; will be dealers in cotton, salt, honey and oil and will be forever in the enjoyment of the vigour of youth. Those who are born on the lunar day of Uttaraphālguni will be mild, cleanly, modest, heretical, generous and learned; will be dealers in grains; will be wealthy, virtuous and in the company of princes. [...]”.

Search found 12 books and stories containing Yuvati, Yavati, Yuvatī; (plurals include: Yuvatis, Yavatis, Yuvatīs). You can also click to the full overview containing English textual excerpts. Below are direct links for the most relevant articles: