Yamantaka means something in Buddhism, Pali, Hinduism, Sanskrit. If you want to know the exact meaning, history, etymology or English translation of this term then check out the descriptions on this page. Add your comment or reference to a book if you want to contribute to this summary article. 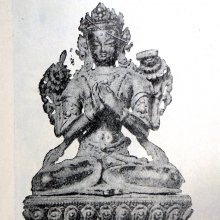 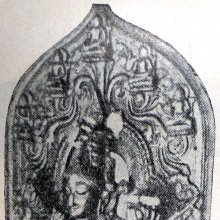 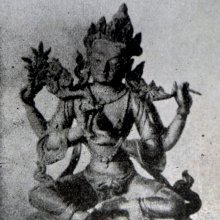 1) Yamāntaka (यमान्तक) or Yamāri is the name of a deity and one of the various emanations of Akṣobhya, as mentioned in the 5th-century Sādhanamālā (a collection of sādhana texts that contain detailed instructions for rituals).—When Yamāntaka is red he is called Raktayamāri and when he is blue he is called Kṛṣṇayamāri. Yamāri or Yamāntaka may either be worshipped alone or in conjunction with his Prajñā. He should have the head of a buffalo on his shoulders and should ride a buffalo.

Getty records a tradition current in Tibet which gives the origin of this fearful god.

“There was once a holy man who lived in a cave in deep meditation for fifty years after which he was to enter Nirvāṇa. On the night of the forty-ninth year, eleventh month and twenty-ninth day two robbers entered the cave with a stolen bull and slaughtered it there. But when they discovered the presence of an ascetic, a witness to their crime, beheaded him and lo ! his body assumed the ferocious form of Yama and taking up the bull’s head he set it up on his headless shoulder. He then killed the two robbers and drank their blood from the cup made out of their skulls. In his fiery and insatiable thirst for victims he threatened to depopulate the whole of Tibet. The Tibetans appealed to their Tutelary deity, Mañjuśrī, who thereupon, assumed the fierce form of Yamāntaka and defeated Yama in a fearful struggle”.

2) Yamāntaka (यमान्तक) presides over the east and represents one of the ten deities of the quarters (Dikpāla) commonly depicted in Buddhist Iconography, and mentioned in the 11th-century Niṣpannayogāvalī of Mahāpaṇḍita Abhayākara.—His Colour is blue; he has six arms and three faces.—Yamāntaka presides over the East and is one of the popular deities of the Buddhist pantheon He is also known as Yamāri who is often endowed with two forms known as Kṛṣṇa-Yamāri and Rakta-Yamāri.

“On the Eastern spoke of the wheel there is Yamāntaka of blue colour. His three faces have blue, white and red colour. He holds in his four hands the hammer marked with the blue vajra, the sword, the jewel and the lotus”.

[In the vajrahūṃkāra-maṇḍala his second name is given as Vajradaṇḍa.]

Yamantaka (a Vidyarajas) (Chinese: Ta wei te; Japanese: Daiitoku), Conqueror of Death, is believed to be a manifestation of the ultimate wisdom which overcomes evil, suffering and death. In Vajrayana Buddhism, he is frequently depicted as a buffalo headed demon, but in the museums sand mandala, he is symbolized by a blue vajra, or thunderbolt.

Yamāntaka (यमान्तक) is the name of a Vīra (hero) who, together with the Ḍākinī named Yamāntakī forms one of the 36 pairs situated in the Hṛdayacakra, according to the 10th century Ḍākārṇava chapter 15. Accordingly, the hṛdayacakra refers to one of the four divisions of the sahaja-puṭa (‘innate layer’), situated within the padma (lotus) in the middle of the Herukamaṇḍala. The 36 pairs of Ḍākinīs and Vīras [viz., Yamāntaka] are reddish yellow in color; they each have one face and four arms; they hold a skull bowl, a skull staff, a small drum, and a knife.

Yamāntaka (यमान्तक) refers to the first of the “ten wrathful ones” (daśakrodha) as defined in the Dharma-saṃgraha (section 11). The Dharma-samgraha (Dharmasangraha) is an extensive glossary of Buddhist technical terms in Sanskrit (e.g., daśa-krodha and Yamāntaka). The work is attributed to Nagarguna who lived around the 2nd century A.D.

Yamāntaka (यमान्तक).—The presentation of offerings befitting a great protective divinity does not in itself ‘activate’ Yama to perform any specific tasks assigned by a devotee. Yama can be generally propitiated by these offerings—but he may be commanded to perform desired tasks by the superior deity, Yamāntaka (‘Ender of Yama’), in one of his several forms (in a Gsar ma context, Kṛṣṇayamāri, Raktayamāri and Vajrabhairava) since it is Yamāntaka who binds Yama by oath to protect Buddhism.

Search found 10 books and stories containing Yamantaka, Yamāntaka, Yama-antaka; (plurals include: Yamantakas, Yamāntakas, antakas). You can also click to the full overview containing English textual excerpts. Below are direct links for the most relevant articles:

Chapter 4 - Yamāntaka Cycle < [Book 7 - The preaching of the Tantras]

Part 6 - The divisions of the three inner tantras < [A. Resolving the view]

Part 4a.1 - Meditation on the protection circles < [B. The explanation of meditation practice, together with its action of ripening and freeing]