Yamadanda means something in Hinduism, Sanskrit, Jainism, Prakrit, Marathi. If you want to know the exact meaning, history, etymology or English translation of this term then check out the descriptions on this page. Add your comment or reference to a book if you want to contribute to this summary article. 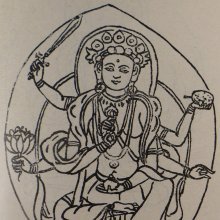 Yamadaṇḍa (यमदण्ड) is a Sanskrit word referring to the rod of Yama. Acording to the Nāṭyaśāstra 1.82-88, when Brahmā, Indra and all other gods went to inspect the playhouse (nāṭyamaṇḍapa) designed by Viśvakarmā, he assigned different deities for the protection of the playhouse itself, as well as for the objects relating to dramatic performance (prayoga).

As such, Brahmā assigned Yamadaṇḍa to the door-frame (threshold, dehalī). The protection of the playhouse was enacted because of the jealous Vighnas (malevolent spirits), who began to create terror for the actors.

Yamadaṇḍa (यमदण्ड) participated in the war between Rāma and Rāvaṇa, on the side of the latter, as mentioned in Svayambhūdeva’s Paumacariu (Padmacarita, Paumacariya or Rāmāyaṇapurāṇa) chapter 57ff. Svayambhū or Svayambhūdeva (8th or 9th century) was a Jain householder who probably lived in Karnataka. His work recounts the popular Rāma story as known from the older work Rāmāyaṇa (written by Vālmīki). Various chapters [mentioning Yamadaṇḍa] are dedicated to the humongous battle whose armies (known as akṣauhiṇīs) consisted of millions of soldiers, horses and elephants, etc.

yamadaṇḍa (यमदंड).—m (S) The punishment inflicted upon sinners by Yama.

Part 7: Defeat and death of Rāvaṇa < [Chapter VII - The killing of Rāvaṇa]

Chapter 24 - Śveta and other Tīrthas

Nectar of Devotion (by A. C. Bhaktivedanta Swami Prabhupada)