Vyaghri means something in Buddhism, Pali, Hinduism, Sanskrit. If you want to know the exact meaning, history, etymology or English translation of this term then check out the descriptions on this page. Add your comment or reference to a book if you want to contribute to this summary article. 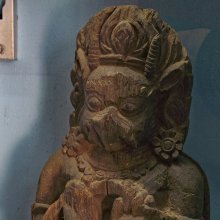 Vyāghrī (व्याघ्री):—Another name for Kaṇṭakārī (Solanum xanthocarpum), a species of medicinal plant and used in the treatment of fever (jvara), as described in the Jvaracikitsā (or “the treatment of fever”) which is part of the 7th-century Mādhavacikitsā, a Sanskrit classical work on Āyurveda.

Vyāghrī (व्याघ्री) is another name for Kaṇṭakārī, a medicinal plant identified with Solanum xanthacarpum, a synonym of Solanum virginianum L. (“surattense nightshade” or “Thai eggplant”) from the Solanaceae or “nightshades” family of flowering plants, according to verse 4.30-32 of the 13th-century Raj Nighantu or Rājanighaṇṭu. The fourth chapter (śatāhvādi-varga) of this book enumerates eighty varieties of small plants (pṛthu-kṣupa). Together with the names Vyāghrī and Kaṇṭakārī, there are a total of fourteen Sanskrit synonyms identified for this plant.

Vyāghrī (व्याघ्री) is another name for “Bṛhatī” and is dealt with in the 15th-century Yogasārasaṅgraha (Yogasara-saṅgraha) by Vāsudeva: an unpublished Keralite work representing an Ayurvedic compendium of medicinal recipes. The Yogasārasaṃgraha [mentioning vyāghrī] deals with entire recipes in the route of administration, and thus deals with the knowledge of pharmacy (bhaiṣajya-kalpanā) which is a branch of pharmacology (dravyaguṇa).

[«previous (V) next»] — Vyaghri in Tibetan Buddhism glossary
Source: academia.edu: The Structure and Meanings of the Heruka Maṇḍala

1) Vyāghrī (व्याघ्री) is the name of a Ḍākinī who, together with the Vīra (hero) named Vyāghra forms one of the 36 pairs situated in the Medinīcakra, according to the 10th century Ḍākārṇava chapter 15. Accordingly, the medinīcakra refers to one of the three divisions of the dharma-puṭa (‘dharma layer’), situated in the Herukamaṇḍala. The 36 pairs of Ḍākinīs [viz., Vyāghrī] and Vīras are yellow in color; the shapes of their faces are in accordance with their names; they have four arms; they hold a skull bowl, a skull staff, a small drum, and a knife.

2) Vyāghrī (व्याघ्री) is also the name of a Ḍākinī who, together with the Vīra (hero) named Vyāghra forms one of the 36 pairs situated in the Jalacakra, according to the same work. Accordingly, the jalacakra refers to one of the three divisions of the saṃbhoga-puṭa (‘enjoyment layer’), situated in the Herukamaṇḍala. The 36 pairs of Ḍākinīs [viz., Vyāghrī] and Vīras are white in color; the shapes of their faces are in accordance with their names; they have four arms; they hold a skull bowl, a skull staff, a small drum, and a knife..