Vishnupurana means something in Hinduism, Sanskrit. If you want to know the exact meaning, history, etymology or English translation of this term then check out the descriptions on this page. Add your comment or reference to a book if you want to contribute to this summary article.

The Sanskrit term Viṣṇupurāṇa can be transliterated into English as Visnupurana or Vishnupurana, using the IAST transliteration scheme (?). 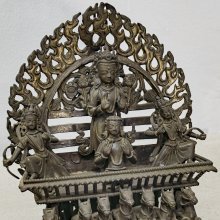 Viṣṇupurāṇa (विष्णुपुराण) should be donated (dāna) on the twelfth tithi according to the Dharmaśāstra taught in the 10th century Saurapurāṇa: one of the various Upapurāṇas depicting Śaivism.—Accordingly, the donation of the various Purāṇas to various recipients on different tithis along with the merits thereof are given in the ninth chapter.—[...] Donation of Viṣṇupurāṇa to a learned person devoted to the study of the Vedas and Vedāṅgas on the twelfth tithi leads to the abode of Viṣṇu.

Viṣṇupurāṇa (विष्णुपुराण).—One of the eighteen Purāṇas. Viṣṇu Purāṇa is the description of the activities in Varāha Kalpa (the age of Varāha—Boar). There are twentythree thousand granthas in this Purāṇa. It is stated in Agni Purāṇa, Chapter 272, that if this book Viṣṇu Purāṇa is given as a gift along with cow and water on the full moon day of the month of Āṣāḍha, the giver would attain the city of Viṣṇu. (For further details see under Purāṇa).

The Vishnu Purana is a primary sacred text of the Vaishnava branch of Hinduism, which today probably has more adherents than any other. It is one of the canonical Puranas, a branch of post-Vedic sacred literature which was first committed to writing during the first millennium of the common era. Like most of the other Puranas, this is a complete narrative from the creation of the current universe to its destruction.

The chronology describes periods as long as a hundred trillion (1014) years! It includes extensive sections on the genealogy of the legendary kings, heroes and demigods of ancient India, including those from the epics, the Mahabharata and Ramayana. There are fascinating descriptions of ancient Hindu cosmology and geography. Of general interest is a collection of stories about the boyhood adventures of Krishna and Rama, whom the Vaishnavas believe to be avatars of Vishnu. There are also references to Buddhism and Jainism, which help establish the date of composition of the work.

This Purana has 6 Chapters (6 Parts) as follows:

The Vishnu Purana is a religious Hindu text and one of the eighteen Mahapuranas. It is considered one of the most important Puranas and has been given the name Puranaratna (gem of Puranas).

Vishnu Purana includes many stories well known in Vedic tradition, including the various avatars of God Vishnu and the life of his complete incarnation, Krishna. Presented as a dialogue between Parashara and his disciple Maitreya and divided into six parts, the major topics discussed include creation, stories of battles fought between asuras and devas, the Avatars (divine descents) of Vishnu and genealogy and stories of legendary kings. Vishnu Purana ascribes its authorship to Veda Vyasa. The Padma Purana categorizes Vishnu Purana as a Sattva Purana (Purana which represents goodness and purity).

The Visnu Purana is one the eighteen major, or maha, Puranas. Of these eighteen Puranas, six are in the mode of goodness, six are in passion and six are in ignorance. Visnu Purana is one of the six sattvika Puranas. This is easily understood because the entire literature is aimed at making one understand the simple truth that Lord Vasnu, being the origin of everything, is one without a second. In other words, there is nothing in existence separate from Lord Visnu.

The Visnu Purana as herein recorded was spoken by Parasara Muni to the sage Maitreya. Parasara Muni is the father of Krsna Dvaipayana Vyasa, the compiler of the Vedas and author of Mahabharata. In Mahabharata, the story of Vyasa’s birth is told. Once, Parasara Muni desired to cross the river and the boatman had engaged his beautiful daughter, Satyavati, to ply the boat that day. Parasara became enamored with Satyavati’s beauty1 and while halfway across the wide river, he expressed his desire for intimate relations with her.

Vishnu Purana is the foremost Puranas among the eighteen great Puranas of ancient India. It is claimed that it contains 23,000 verses where as the text as it is available today contains only 7000 verses. For a comparison, Rig Veda contains 10552 verses and Mahabharata contains 84879 verses. It is arranged as a dialogue between Parasara and his disciple Maitreya. Due to this, some consider that this Purana was authored by Parasara, the father of Vyasa and hence older than Mahabharata. Most likely this could be a later attribution. It is however possible that some core portions of this Purana were authored by Parasara during his life time. But most parts of this Purana describe events that are covered by Mahabharata and a few verses cover events that occurred after Mahabharata froze and stopped growing further. These events include mention of Gautama Buddha, Jaina sages, the reign of Chandragupta Maurya and many Magadha kings who ruled before and after Chandragupta Maurya.

The Purana mostly deals with the glories of Vishnu and his incarnation Krishna. It is arranged in 6 volumes or books.

The Vishnu Purana is a work of the late third or early fourth century c.e.It is a work dedicated essentially to the greatness of the Hindu god Vishnu and is, therefore, particularly sacred to Vaishnavas, worshippers of Vishnu. In the Vishnu Purana, Vishnu is the omnipotent deity. In fact, he is synonymous with the ultimate absolute, Brahman, as he is in the Bhagavadgita. The Vishnu Purana tells of the creation of the universe by Vishnu. The great god is the navel of the universe; he reaches from its heavens to its depths. The Purana tells of Vishnu's incarnation as the avatar Lord Krishna and of the way the universe will be absorbed into Vishnu at the end of the age. According to the Vishnu Purana, Brahman is one and the same with Brahma as he creates, Vishnu as he preserves, and Shiva as he destroys. All are elements of the same universal sacrifice, or process of creation, life, and the destruction that leads to new life

The Viṣṇupurāṇa is eminently Vaiṣṇava and considers Viṣṇu as the supreme being, Suprime Brahma and Paramātmā. It is a ssectarial work, but of a much more sober character than such works generally possess and appropriates to legend and panegyric a comparatively in significant portion of its content. The Viṣṇupurāṇa is supposed to be related by Parāśara, the grandson of Vasiṣṭha, to his disciple Maitreya.

Book 1) The first book mainly contains an account of creation.

Book 2)The second book consists of the usual account of the division of the earth into Dvīpas, and the formation of seven Pātālas and Narka, with the situation and course of the planets and the description of their several stars; that of sun is very fully and curiously detailed.

Book 3) The third book deals with the systematic classification of the contents of a Purāṇa.

Book 4) The fourth book deals with the genealogies of the royal families, commencing with lineages of the sun and moon, and terminating with kings of the Kali age.

Book 5) The fifth book is appropriated to the history of Kṛṣṇa, although the story is told in the usual strain, yet there is peculiarity. He is only an incarnation of Viṣṇu.

Book 6) The last book of the Viṣṇupurāṇa, after describing the divisions of the time into Kalpas, etc. expatiates on the various pangs and directs mankind to only remedy for them, faith in Viṣṇu as the Supreme.

Viṣṇupurāṇa (विष्णुपुराण).—Name of one of the most celebrated of the eighteen Purāṇas.

Viṣṇupurāṇa is a Sanskrit compound consisting of the terms viṣṇu and purāṇa (पुराण).

Viṣṇupurāṇa (विष्णुपुराण):—[=viṣṇu-purāṇa] [from viṣṇu] n. Name of one of the most celebrated of the 18 Purāṇas (it conforms more than any other to the definition pañca-lakṣaṇa [q.v.]; and consists of 6 books, the 1st treating of the creation of the universe from Prakṛti, and the peopling of the world by the Prajā-patis; the 2nd giving a list of kings with many curious geographical and astronomical details; the 3rd treating of the Vedas and caste; the 4th continuing the chronicle of dynasties; the 5th giving the life of Kṛṣṇa; the 6th describing the dissolution of the world), [Indian Wisdom, by Sir M. Monier-Williams 517.]

Used and Prohibited Food and Vegetables for Śrāddha Ceremony < [Chapter 2]

Establishment of Hayagrīva in different Purāṇas as an Avatāra < [Chapter 4]

Mode of worship of Hayagrīva < [Chapter 4]

Part 6 - Rājagṛha supreme seat (a): King Jarāsandha < [Chapter II - Origin and Function of Rājagṛha as the seat of Monarchy]

Part 8 - Rājagṛha: The Nodal Centre on the Emergence < [Chapter I - The Case Study of Rājagṛha]