Vishnukranta means something in Hinduism, Sanskrit, Marathi, biology. If you want to know the exact meaning, history, etymology or English translation of this term then check out the descriptions on this page. Add your comment or reference to a book if you want to contribute to this summary article.

The Sanskrit term Viṣṇukrānta can be transliterated into English as Visnukranta or Vishnukranta, using the IAST transliteration scheme (?). 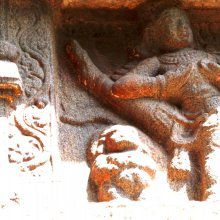 Viṣṇukrānta (विष्णुक्रान्त).—One of the 108 karaṇas (minor dance movement) mentioned in the Nāṭyaśāstra chapter 4. The instructions for this viṣṇukrānta-karaṇa is as follows, “a foot stretched forward and bent as if on the point of walking, and hands to be Recita.”.

Vishnukranta in the Marathi language is the name of a plant identified with Evolvulus alsinoides (L.) L. from the Convolvulaceae (Morning glory) family having the following synonyms: Convolvulus alsinoides. For the possible medicinal usage of vishnukranta, you can check this page for potential sources and references, although be aware that any some or none of the side-effects may not be mentioned here, wether they be harmful or beneficial to health.

1) Viṣṇukrāntā in the Marathi language refers to the medicinal climber “Clitoria ternatea L.”, and is used for ethnomedicine treatment of Fever in Ahmednagar district, India. The parts used are: “Leaves”. Instructions for using the climber named Viṣṇukrāntā: The paste of Leaf mixed with the paste of adrak (Zingiber officinale) 1 g each—applied on forehead.

2) Viṣṇukrānta (or Viṣṇukrāṃta) in the Marathi language refers to the medicinal herb “Evolvulus alsinoides L.”, and is used for ethnomedicine treatment of Fever in Ahmednagar district, India. The parts used are: “Whole plant”.

Viṣṇukrāntā (विष्णुक्रान्ता) refers to the medicinal plant known as “Evolvulus alsinoides (Linn.) Linn.” and is dealt with in the 15th-century Yogasārasaṅgraha (Yogasara-saṅgraha) by Vāsudeva: an unpublished Keralite work representing an Ayurvedic compendium of medicinal recipes. The Yogasārasaṃgraha [mentioning viṣṇukrāntā] deals with entire recipes in the route of administration, and thus deals with the knowledge of pharmacy (bhaiṣajya-kalpanā) which is a branch of pharmacology (dravyaguṇa).

Viṣṇukrāntā (विष्णुक्रान्ता) is the Sanskrit name for an unidentified medicinal plant, according to verse 5.89 of the 13th-century Raj Nighantu or Rājanighaṇṭu. Note: The Viṣṇukrāntā of this chapter (i.e., chapter five) is certainly a different species fro mthe plant referred in the 3rd chapter as Girikarṇikā or Aparājitā and needs a thorough review for its identification.

Properties and characteristics: “Viṣṇukrāntā is pungent (kaṭu), bitter (tikta) and cures the diseases due to vitiated kapha and vāta”.

1) Viṣṇukrānta (विष्णुक्रान्त) is the name of the Creeper (vallī) associated with Pūrṇagiri, one of the sacred seats (pīṭha), according to chapter 10 of the according to the Kularatnoddyota, one of the earliest Kubjikā Tantras.—If the scheme in the Yogakhaṇḍa is not the first example of this model, the other most likely candidate is found in chapter ten of the Kularatnoddyota, which is an early Tantra of the Kubjikā corpus. [...] In this set-up each of the four sacred seats corresponds to a cosmic age and has a tree, creeper [i.e., Viṣṇukrānta], cave, monastery (maṭha), goddess, Siddha, and guardian of the field. The layout can be tabulated as follows.

2) Viṣṇukrāntā (विष्णुक्रान्ता) is the name of the Tendril (valli) associated with Jālandhara, one the eight Sacred Seats (pīṭha), according to the Yogakhaṇḍa (chapter 14) of the Manthānabhairavatantra, a vast sprawling work that belongs to a corpus of Tantric texts concerned with the worship of the goddess Kubjikā.

Visnukranta in India is the name of a plant defined with Evolvulus alsinoides in various botanical sources. This page contains potential references in Ayurveda, modern medicine, and other folk traditions or local practices It has the synonym Convolvulus linifolius L. (among others).

If you are looking for specific details regarding Visnukranta, for example pregnancy safety, side effects, extract dosage, chemical composition, diet and recipes, health benefits, have a look at these references.

2) [noun] (dance.) (while standing) a foot is stretched forward and rested on the forepart and the heel lifted up,and the hands are lifted up with both palms and fingers straightened up.

Chapter 265 - The sacred bathing of the deities (dikpāla-snāna)