Vishnukanta means something in Buddhism, Pali, Hinduism, Sanskrit, biology. If you want to know the exact meaning, history, etymology or English translation of this term then check out the descriptions on this page. Add your comment or reference to a book if you want to contribute to this summary article.

The Sanskrit terms Viṣṇukānta and Viṣṇukāntā can be transliterated into English as Visnukanta or Vishnukanta, using the IAST transliteration scheme (?). 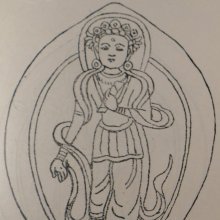 Viṣṇukānta (विष्णुकान्त, “octagonal”) refers to a classification of bhittipādas, which refers to the walls of a temple.

1) Viṣṇukānta (विष्णुकान्त) refers to a variety of prāsāda (‘superstructure’, or, upper storey of any building), according to the Mayamata (5th-century guidebook on Dravidian architecture). It is part of the Dvitala (two-storey) group of prāsādas.

The Viṣṇukānta variety has the following specifications and decorative motif components:

Viṣṇukānta (विष्णुकान्त).—A type of bhittipāda, or “pilaster”;—This type of shaft possesses a carved cubical base. Above this, the shaft is made octagonal up to the bottom of the phalaka. Because the shaft is made octagonal, the upper comers of the base are decorated with patra decoration. The octagonal shaft, like the brahmakāntha type, contains vase, kumbha, maṇḍi and phalaka. The viṣṇukānta-bhittipādas are generally attractive in their form because of the tastefiil decorative carvings made on them. The base is relieved with vallimaṇḍala and other floral designs.

“Viṣṇukāntā again is identical with [Piṇḍapātra Lokeśvara] in all respects, except that here the god displays the Varada mudrā with his right hand and the book against his chest in his left.—Piṇḍapātra Lokeśvara is one-faced and two-armed and stands on a lotus. He holds the Piṇḍapātra (the bowl) in his two hands near the navel”.

The names of the 108 deities [viz., Viṣṇukāntā] possbily originate from a Tantra included in the Kagyur which is named “the 108 names of Avalokiteshvara”, however it is not yet certain that this is the source for the Nepali descriptions.

Chapter 8 - The Pillar and other Members

Part 6 - Relation with other works < [Preface]