Vibhuti means something in Hinduism, Sanskrit, Jainism, Prakrit, Buddhism, Pali, the history of ancient India, Marathi, Hindi. If you want to know the exact meaning, history, etymology or English translation of this term then check out the descriptions on this page. Add your comment or reference to a book if you want to contribute to this summary article. 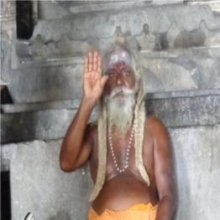 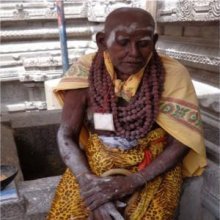 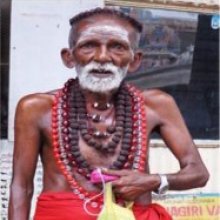 Vibhuti - The sublimated power of procreation. Kāma or Eros was destroyed and turned into ashes by the ray from the third-eye of Shiva. Ashes also symbolise the ultimate transience of everything.

Vibhūti (विभूति).—One of Viśvāmitra’s sons who were expounders of the Vedas. Anuśāsana Parva, Chapter 4, Stanza 57).

1b) Of Hari; Indra among gods, Viṣṇu among Ādityas, Bhṛgu among Brahmaṛṣis and so on.*

Vibhūti (विभूति) is a name mentioned in the Mahābhārata (cf. XIII.4.56, XIII.4) and represents one of the many proper names used for people and places. Note: The Mahābhārata (mentioning Vibhūti) is a Sanskrit epic poem consisting of 100,000 ślokas (metrical verses) and is over 2000 years old.

1) Vibhūti (विभूति) and Īśvara refers to the pair of Goddess and God appearing in the seventh Kalpa (aeon), according to the Kularatnoddyota.—Chapter nine of the Kularatnoddyota opens with the goddess asking how the Kula tradition (kulāmnāya) will be worshipped along with its mantras and Vidyās and who will bring it down (avatāraka) into the world in the various cosmic aeons (kalpa). After explaining that it is brought down into the world by incarnations or aspects of both the god and the goddess (aṃśamātra), the god goes on to list the names of these aspects—a goddess and her consort [i.e., Vibhūti—Īśvara]—in nineteen aeons (kalpa), many of which we recognize from the earlier version in the Tantrasadbhāva.—(cf. Jayadrathayāmala-tantra of the Kāpālikas).

3) Vibhūti (विभूति) is the name of the Maṭha associated with Nāda, one the eight Sacred Seats (pīṭha), according to the Yogakhaṇḍa (chapter 14) of the Manthānabhairavatantra.

Vibhūti (विभूति) refers to “(various) powers”, according to the Īśvarapratyabhijñāvimarśinī (KSTS vol. 65, 330).—Accordingly, “[...] Thus, due to practicing [this insight], the qualities of His consciousness, which are aspects of Śakti, fully penetrate [those various levels], causing the [various] powers (vibhūti) to arise. But even without practice, in the [rare] case of an instantaneous immersion into That, one obtains the state of liberation-in-life through the process of the direct experience of [the Five Mystic States]: Bliss, Ascent, Trembling, Sleep, and ‘Whirling,’ which means Pervasion”.

[«previous (V) next»] — Vibhuti in Jainism glossary
Source: The University of Sydney: A study of the Twelve Reflections

Vibhūti (विभूति) refers to “superhuman powers” (i.e. the rainbow), according to the 11th century Jñānārṇava, a treatise on Jain Yoga in roughly 2200 Sanskrit verses composed by Śubhacandra.—Accordingly, “[com.—Next he explains (darśayati) the transience (anityatvam) of superhuman powers (vibhūtinām)]—As the waves of rivers only go away [and] they do not return, so the former powers of embodied souls that have gone away do not come [again]”.

Vibhūti.—(IA 12), holy ashes; same as vibhoga. (SITI), also called vibhūti-kāṇikkai in Tamil inscriptions; originally, voluntary contribution to a temple by the devotees while receiving the sacred ashes; later, it was collected as a tax. Note: vibhūti is defined in the “Indian epigraphical glossary” as it can be found on ancient inscriptions commonly written in Sanskrit, Prakrit or Dravidian languages.

vibhūti (विभूति).—f S Ashes (of dung, wood &c.) with which Shiva is said to have smeared his body, and employed now, in imitation of him, by devotees. Grandeur, glory, majesty, magnificence. 3 Superhuman power consisting of eight faculties especially attributed to Shiva, and supposed to be attainable through a course of austere worship in honor of Shiva and his wife Durga. The eight are a- ṇimā Extreme minuteness or invisibility, laghimā Extreme lightness or incorporeality, garimā Power of increasing one's weight ad infinitum, prāpti Reach or power of attaining unto anything, prākāmya The fulfilment of every wish, mahimā Illimitable bulk, īśitā Sovereignty or supreme dominion, vaśitā The power of enchanting or of holding in obedience Nature with her works and laws. 4 The term is applied, by a figure, to a person distinguished for learning, riches &c. vibhūtīcēṃ mūḷa rēḍyācē gāṇḍīnta (Of sanctity, sacredness, or honorableness, the origin and rise may have been out of foulness and baseness.) Used in remarking upon the pretensions to holiness or greatness of one whose primitive condition was impure or mean.

(-tiḥ) 1. Superhuman power, consisting of eight faculties especially attributed to Siva, and supposed to be attainable by human beings, through a course of austere worship, attended with magical rites, in honor of that deity and his spouse Durga: the eight properties thus supposed to be assumable at will are:- aṇimā extreme minuteness or invisibility; laghimā extreme light- ness or incorporeality; prāpti attaining or reaching any thing, as illustrated by the power of touching the moon with the tip of the finger; prākāmyaṃ the fulfilment of every wish; mahimā illimitable bulk; īśitā supreme dominion over animate or inanimate nature; vaśitā the power of enchanting or changing the course of nature, and kāmāvaśāyitā the accomplishment of every promise or engagement. 2. Power, dignity, dominion. 3. Ashes of cow-dung, &c. with which Siva is said to have smeared his body, and thenee used in imitation of him by devotees. 4. Prosperity. 5. Wealth. E. vi implying change of form, &c., bhū to be, aff. ktin .

9) [v.s. ...] manifestation of might, great power, superhuman power (consisting of eight faculties, especially attributed to Śiva, but supposed also to be attainable by human beings through worship of that deity, viz. aṇiman, the power of becoming as minute as an atom; laghiman, extreme lightness; prāpti, attaining or reaching anything e.g. the moon with the tip of the finger ; prākāmya, irresistible will; mahiman, illimitable bulk; īśitā, supreme dominion; vaśitā, subjugating by magic; and kāmāvasāyitā, the suppressing all desires), [ib.]

11) [v.s. ...] the might of a king or great lord, sovereign power, greatness, [Kālidāsa; Pañcatantra; Kathāsaritsāgara] etc.

17) [v.s. ...] the ashes of cow-dung etc. (with which Śiva is said to smear his body, and hence used in imitation of him by devotees), [Pañcarātra; Sāhitya-darpaṇa]

Vibhūti (विभूति) in the Sanskrit language is related to the Prakrit word: Vibhūi.

1) [noun] manifestation of might, great power, superhuman power, attributed to be the quality of the Supreme Being.

4) [noun] great honour and admiration won by doing something important or valuable; glory.

5) [noun] a man who has extraordinary and divine qualities.

Verse 10.19 < [Chapter 10 - Vibhūti-yoga (appreciating the opulences of the Supreme Lord)]

Verse 9.24 < [Chapter 9 - Rāja-guhya-yoga (Yoga through the most Confidential Knowledge)]

Verse 10.1 < [Chapter 10 - Vibhūti-yoga (appreciating the opulences of the Supreme Lord)]

Chapter 41 - The Equality and Inequality among the Categories