Vetali means something in Buddhism, Pali, Hinduism, Sanskrit, Marathi. If you want to know the exact meaning, history, etymology or English translation of this term then check out the descriptions on this page. Add your comment or reference to a book if you want to contribute to this summary article. 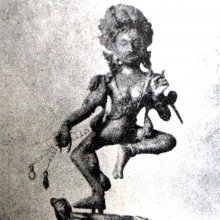 Vetālī (वेताली) refers one of the eight Gaurīs, commonly depicted in Buddhist Iconography, and mentioned in the 11th-century Niṣpannayogāvalī of Mahāpaṇḍita Abhayākara.—Her Colour is red; her Symbol is the chain; she has two arms.—The third goddess in the Gaurī group is Vetālī.

“Vetālī is red in colour and holds in her two hands the chain”.

[All the deities are violent in character with fearful appearance and ornaments, and garlands of heads. They dance in pratyālīḍha and show the raised index finger with clasped fist against the chest, as the common gesture.]

Vetālī (वेताली) is also mentioned as the Ḍākinī of the western gate in the Jñānacakra, according to the 10th century Ḍākārṇava chapter 15. Accordingly, the jñānacakra refers to one of the three divisions of the saṃbhoga-puṭa (‘enjoyment layer’), situated in the Herukamaṇḍala. The four gate Ḍākinīs [viz., Vetālī] each has the same physical feature as the four Ḍākinīs starting with Lāmā.