Vasudhara means something in Buddhism, Pali, Hinduism, Sanskrit. If you want to know the exact meaning, history, etymology or English translation of this term then check out the descriptions on this page. Add your comment or reference to a book if you want to contribute to this summary article. 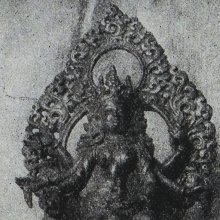 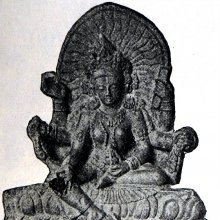 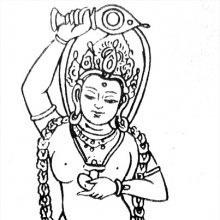 Vasudhārā (वसुधारा).—A holy place. Those who visit this place could enjoy the fruits of performing horse-sacrifice. If one gives offering to the manes after getting oneself purified by bathing in this holy tīrtha (bath), one will attain the world of Viṣṇu. There is a lake of the Aṣṭavasus (eight Vasus) in this place. By bathing there, one could become the subject of the love and regard of the eight Vasus. (Mahābhārata Vana Parva, Chapter 82, Stanza 63).

Vasudhāra (वसुधार).—A mountain where there are eight temples to the Vasus.*

Vasudhārā (वसुधारा) refers to the name of a Tīrtha (pilgrim’s destination) mentioned in the Mahābhārata (cf. ). Note: The Mahābhārata (mentioning Vasudhārā) is a Sanskrit epic poem consisting of 100,000 ślokas (metrical verses) and is over 2000 years old.

Vasudhārā (वसुधारा) refers to one of the 135 metres (chandas) mentioned by Nañjuṇḍa (1794-1868 C.E.) in his Vṛttaratnāvalī. Nañjuṇḍa was a poet of both Kannada and Sanskrit literature flourished in the court of the famous Kṛṣṇarāja Woḍeyar of Mysore. He introduces the names of these metres (e.g., Vasudhārā) in 20 verses.

Vasudhara (वसुधर) is the name of a porter (bhārika) from Kauśāmbī, according to the Kathāsaritsāgara, chapter 57. Accordingly, as Ratnadatta said to Udayana and Naravāhanadatta: “... there is a poor porter here, of the name of Vasundhara [Vasudhara]; and suddenly he is found of late to be eating, drinking, and bestowing alms. So, out of curiosity, I took him to my house, and gave him food and drink to his heart’s content, and when I had made him drunk, I questioned him..”.

The Kathāsaritsāgara (‘ocean of streams of story’), mentioning Vasudhara, is a famous Sanskrit epic story revolving around prince Naravāhanadatta and his quest to become the emperor of the vidyādharas (celestial beings). The work is said to have been an adaptation of Guṇāḍhya’s Bṛhatkathā consisting of 100,000 verses, which in turn is part of a larger work containing 700,000 verses.

1) Vasudhārā (वसुधारा) refers to one of the female emanations of Akṣobhya, as mentioned in the 5th-century Sādhanamālā (a collection of sādhana texts that contain detailed instructions for rituals).—Her Colour is yellow; her Mudrā is the varada; her Symbol is ears of corn.—Vasudhārā figures in the pantheon of the Mahāyāna Buddhists asthe consort of Jambhala, the Buddhist god of wealth. Only three sādhanas are devoted to her worship and in one of these only is she said tobear the image of Akṣobhya. The two others assign her to the Dhyāni Buddha Ratnasambhava. It may be noticed, by the way, that Vasudhārā is of a greater antiquity than the Dhyāni Buddhas themselves.

The Dhyāna (meditation instructions) of Vasudhārā described in the Sādhanamālā as follows:—

“The worshipper should conceive himself as the goddess Vasudhārā of golden complexion and decked in all sorts of ornaments. She appears a young girl of twice eight years, exhibits the varada-mudrā in the right hand, carries the ears of corn in the left, and bears the image of Akṣobhya on the crown. In front of the goddess should be conceived Śrīvasundharā, in the right Vasuśrī, in the west Śrīvasumukhī, and in the left Vasumatiśrī. These four goddesses originate from the first syllables of their names, and are identical in form with the principal goddess.”

2) Vasudhārā (वसुधारा) also refers to one of the various emanations of Ratnasambhava.—Her Colour is yellow; her Symbol is ears of corn; she has one face and two arms..—Vasudhārā is the consort of Jambhala and bears the image of either Akṣobhya or Ratnasambhava on her crown. Several Sādhanas in the Sādhanamālā describe her form which is invariably two-armed

The Dhyāna (meditation instructions) of Vasudhārā described in the Sādhanamālā as follows:—

“The worshipper should conceive himself as (Vasudhārā ) who originates from the yellow germ syllable ‘Vaṃ’. She is two-armed, one-faced, of yellow complexion, is in the prime of youth and is decked in all sorts of ornaments and garments. She carries in her left hand the ears of corn on a vessel showering gems, while the right exhibits the varada-mudrā. She is surrounded by many lady friends, rests on the moon over the double lotus, and bears the image of Ratnasambhava on the crown”.

[As none of the sādhanas mentions the āsana, she may be represented in any attitude, standing or sitting... Vasudhārā is sometimes represented as one^ faced and six-armed, and as sitting in the lalita attitude. In the three right hands she exhibits the namaskāra-mudrā, the varada-mudrā and the ears of corn. The first left hand has the book, the second the ears of corn, and the third on the lap carries the vessel containing jewels. Her hair rises upwards in the shape of a flame, she is beautifully decked in ornaments and her expression is truly peaceful.]

Vasudhārā (वसुधारा) refers to the first of “seven days” (saptavāra) classified as a dhāraṇī according to a 17th-century Sanskrit manuscript from Nepal .—This collection associates each dhāraṇī with a specific day of the week, a tradition going back to at least the sixteenth century in Nepal.

(-rā) 1. A female Sakti peculiar to the Jainas. 2. The capital of Kuvera. E. vasu wealth, dhṛ to have, affs. ghañ and ṭāp; some authorities read vasubhārā for Kuvera'S capital.

Vasudhārā (वसुधारा):—[vasu-dhārā] (rā) 1. f. A female shakti peculiar to the Jainas; the capital of Kuvera.