Varma means something in Hinduism, Sanskrit, Marathi, Hindi. If you want to know the exact meaning, history, etymology or English translation of this term then check out the descriptions on this page. Add your comment or reference to a book if you want to contribute to this summary article.

Alternative spellings of this word include Varm. 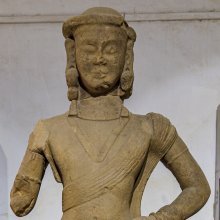 varma (वर्म).—n (S) Armour or mail. 2 An affix to the names of men of the Kshatriya tribe; as kṛṣṇavarmā kṣatriya. varmēṃ carmēṃ chēdaṇēṃ (To pierce through armour and skin.) To pierce deeply, thoroughly, vitally, lit. fig.

varma (वर्म).—n ( A Tumor or imposthume.) A sore and quickly sensible place; a tender and irritable part: also a vital member or organ; a mortal spot. This literal sense is not so general as the following figurative sense arising from it; viz. A touchy point; a vulnerable part; a matter or subject (such as a secret foible, failing, slip) upon which, at the very naming of it, passion rises. 2 If the derivation above suggested be correct, the signification set down should be viewed as involving the whole import of the word; but as the word is indisputably common also in all the senses and applications of the word marma, it possibly may from it have been formed, through that ignorance or heedlessness with which, as the source and spring of formations, the proficient in Maraṭhi is abundantly conversant; and thus even the compounds varmabhēda, varmasthala, varmasthāna &c. may sometimes be met with. Turn to marma for full explication and illustration.

varma (वर्म).—n A sore and quickly sensible place; a touchy point. An affix to the name of kṣatriya as kṛṣṇavarmā.

Varma (ವರ್ಮ):—[noun] something that is or is kept secret, hidden or concealed; a secret.

1) [noun] a metal or leather covering to protct the body against weapon; an armour.

2) [noun] a protecting or being protectged.

4) [noun] the outside covering of the stems of trees and woody plants; bark.

5) [noun] a surname to the names of men belonging to a few kṣatriya families.

Search found 21 books and stories containing Varma, Varmā; (plurals include: Varmas, Varmās). You can also click to the full overview containing English textual excerpts. Below are direct links for the most relevant articles: