Vajragarbha means something in Buddhism, Pali, Hinduism, Sanskrit. If you want to know the exact meaning, history, etymology or English translation of this term then check out the descriptions on this page. Add your comment or reference to a book if you want to contribute to this summary article. 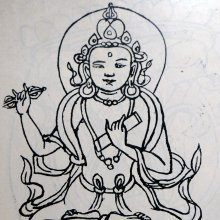 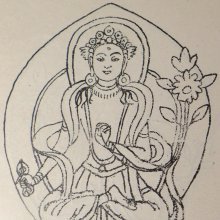 1) Vajragarbha (वज्रगर्भ) (“matrix of thunderbolt”) is the name of a Bodhisattva commonly depicted in Buddhist Iconography, and mentioned in the 11th-century Niṣpannayogāvalī of Mahāpaṇḍita Abhayākara.—his color is blue or bluish white ; his symbol is the Daśabhūmika scripture.—

“Vajragarbha also has the same number of hands and faces as No. 44. He holds the Vajra in his right hand and the stem of a lotus in his left”.

The names of the 108 deities [viz., Vajragarbha] possbily originate from a Tantra included in the Kagyur which is named “the 108 names of Avalokiteshvara”, however it is not yet certain that this is the source for the Nepali descriptions.Source: Brill: Śaivism and the Tantric Traditions (tantric Buddhism)

[«previous (V) next»] — Vajragarbha in Mahayana glossary
Source: academia.edu: A Study and Translation of the Gaganagañjaparipṛcchā

Vajragarbha (वज्रगर्भ) refers to the “essence of diamond”, according to the Gaganagañjaparipṛcchā: the eighth chapter of the Mahāsaṃnipāta (a collection of Mahāyāna Buddhist Sūtras).—Accordingly, “The venerable Ānanda said this to the Lord: ‘O Lord, when will the wicked māra wake up to incomparable complete awakening? What will he be called after having attained the awakening? And what will be the name of that universe?’ The Lord said: ‘Ānanda, the wicked Māra, doing the works of the māra in the Buddha-fields of ten directions again and again, will hear the dharma of destroying vices by the essence of diamond (vajragarbha) from the awakened Buddhas there, and will see the secret practice, behaviour, good qualities, maintaining morality, practice, ceremony and application of the Buddhas and the Bodhisattvas. [...]’”.

Search found 7 books and stories containing Vajragarbha, Vajra-garbha; (plurals include: Vajragarbhas, garbhas). You can also click to the full overview containing English textual excerpts. Below are direct links for the most relevant articles:

6. The Other Power (adhiṣṭhāna) < [Chapter 5 - The Practice of Buddha-Nature in the Laṅkāvatārasūtra]