Ushnisha means something in Buddhism, Pali, Hinduism, Sanskrit, the history of ancient India, Hindi. If you want to know the exact meaning, history, etymology or English translation of this term then check out the descriptions on this page. Add your comment or reference to a book if you want to contribute to this summary article.

The Sanskrit terms Uṣṇīṣā and Uṣṇīṣa can be transliterated into English as Usnisa or Ushnisha, using the IAST transliteration scheme (?).

Alternative spellings of this word include Ushnish. 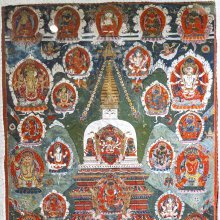 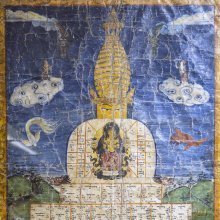 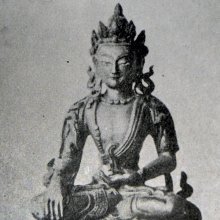 Uṣṇīṣa (उष्णीष) refers to a type of temple (prāsāda) classified under the group named Vairāja, according to Samarāṅgaṇasūtradhāra chapter 49. The Vairāja group contains twenty-four out of a sixty-four total prāsādas (temples) classified under five prime vimānas (aerial car/palace), which were created by Brahmā for as many gods (including himself). The group represents temples (e.g. Uṣṇīṣa) that are to be square shaped. The prāsādas, or ‘temples’, represent the dwelling place of God and are to be built in towns. The Samarāṅgaṇasūtradhāra is an 11th-century encyclopedia dealing with various topics from the Vāstuśāstra.

Uṣṇīṣa is also listed in the Agnipurāṇa which features a list of 45 temple types. It is listed under the group named Kailāśa, featuring circular-shaped temples. This list represents a classification of temples in Nort-India.

“The uṣṇīṣa-bhūśaṇa should be made so as to be of three aṅgulas in height. On its four sides there must be four pūris. In the middle of the uṣṇīṣa there must be a makarakūṭa with seven holes. On each side there has to be a patrakūṭa and on the back, a ratnakūṭa. The breadth of the uṣṇīṣa must be ten aṅgulas at the top, while at the base it has to be the same as that of the face of the wearer. A crescent of the moon has, in the case of the image of Śiva, to be attached to it either on the left or on the right side, and there is to be a cobra on the left side. Five jaṭās or braids of matted hair are taken and tied into a know three inches in height ny coiling them into one or three loops, the remaining braids being bound and taken through to be left hanging on both sides”

Uṣṇīṣa (उष्णीष, “turban”) refers to one of the five kinds of external marks of an ācārya (“Śaiva preceptor”), according to Nigamajñāna (Śaiva teacher of the 16th century) in his Śaivāgamaparibhāṣāmañjarī.

Uṣṇīsa (उष्णीस) (Cf. Pīṭha) refers to a “turban”, according to the Niḥśvāsatattvasaṃhitā, one of the most ancient of extant Śaiva Tantras.—Accordingly, “Having offered a seat (pīṭha), umbrella, turban [i.e., uṣṇīsa] and knife, (one should say): ‘You are the teacher, Śiva's equal; exercise (your) grace in the world’.”.

Uṣṇīṣa (उष्णीष) refers to a “turban”, according to the 9th-century Sarvajñānottaratantra chapter 18.—Accordingly, “Next, I shall teach the best observance among observances, which is known as the Śiva-vrata and which is revered by Asuras and Gods alike. [...] He should be mantra-bodied; the appearance of excellent Sādhakas [who follow this observance] is to be the same as that of Śiva: the observance must be understood as consisting in this. Alternatively, he may wear [just] a white loin-cloth, [and bear] a turban (uṣṇīṣa), rosary and spouted water-pot. [...]”.

Uṣṇīṣa (उष्णीष) refers to a “crown” (for decoration), according to the Netratantra of Kṣemarāja: a Śaiva text from the 9th century in which Śiva (Bhairava) teaches Pārvatī topics such as metaphysics, cosmology, and soteriology.—Accordingly, [verse 2.17-19]—“The pure-souled Ācārya should draw an eight petaled lotus, in smooth, pure earth [that is] smeared with sandal and aloe wood [and] scented [with] fragrant camphor and strong saffron. After he has drawn [the lotus] with a great undertaking, [the Ācarya,] decorated and adorned with a crown (uṣṇīṣa), smeared with sandalwood, [writes] the mātṛkā. Having placed oṃ in the middle [on the pericarp of the lotus], he should draw [the phonemes of the mātṛkā on the petals] starting in the East”.

Uṣṇīṣa (उष्णीष, “crown”) refers to the “cranial protuberance”, from which the Buddha emitted numerous rays when he smiled with his whole body after contemplating the entire universe, according to the 2nd century Mahāprajñāpāramitāśāstra (chapter XIV).—Accordingly, having himself arranged the lion-seat, the Bhagavat sat down cross-legged; holding his body upright and fixing his attention, he entered into the samādhirājasamādhi. Then, having tranquilly come out of this samādhi and having contemplated the entire universe with his divine eye (divyacakṣus), the Bhagavat smiled with his whole body. Wheels with a thousand spokes imprinted on the soles of his feet (pādatala) shoot out six hundred prabhedakoṭi of rays. In the same way, beams of six hundred prabhedakoṭi of rays are emitted from his uṣṇīṣa.

After emission, the rays (raśmi) might return to the uṣṇīṣa (cranial protuberance), according to Mahāprajñāpāramitāśāstra (chapter XIV). According to the Avadānaśataka and Divyāvadāna, it is a custom that, at the moment when the Buddha Bhagavats show their smile, blue, yellow, red and white rays flash out of the Bhagavat’s mouth, some of which go up and some of which go down. Those that go down penetrate into the hells (naraka); those that go up penetrate to the gods from the Cāturmahārājikas up to the Akaniṣṭas. Having travelled through the trisāhasramahāsāhasralokadhātu, the rays return to the Bhagavat from behind. According as to whether the Buddha wishes to show such-and-such a thing, the rays return to him by a different part of the body.

Uṣṇīṣa (उष्णीष) is the name of an Uṣṇīṣa king [i.e., Uṣṇīṣarāja] mentioned as attending the teachings in the 6th century Mañjuśrīmūlakalpa: one of the largest Kriyā Tantras devoted to Mañjuśrī (the Bodhisattva of wisdom) representing an encyclopedia of knowledge primarily concerned with ritualistic elements in Buddhism. The teachings in this text originate from Mañjuśrī and were taught to and by Buddha Śākyamuni in the presence of a large audience (including Uṣṇīṣa).

1) Uṣṇīṣa (उष्णीष) refers to a class of gods in Vajrayāna.—The word uṣṇīṣa means “the crown” but the deities have nothing to do with the crown. They are usually placed like the gods of Direction, in the four principal directions and the four intermediate corners. These eight Uṣṇīṣa gods seem to be an extension of the four Dhyāni Buddhas, and they show their characteristic symbols and mudrās.

2) Uṣṇīṣa (उष्णीष) presides over the sky (above) and represents one of the ten deities of the quarters (Dikpāla) commonly depicted in Buddhist Iconography, and mentioned in the 11th-century Niṣpannayogāvalī of Mahāpaṇḍita Abhayākara.—His Colour is yellow; he has three faces and six arms.—The ninth deity in this series is Uṣṇīṣa who is also known as Uṣṇīṣacakravartī, and presides over the sky above.

“In the upper region there is Uṣṇīṣa-Cakravartī of yellow colour. His three faces are yellow, blue and red. He holds the yellow discus, the sword, the jewel and the lotus”.

[His two principal hands hold the śakti as usual.]

Uṣṇīṣā (उष्णीषा) or Uṣṇīṣī is the name of a Ḍākinī who, together with the Vīra (hero) named Uṣṇīṣa forms one of the 36 pairs situated in the Hṛdayacakra, according to the 10th century Ḍākārṇava chapter 15. Accordingly, the hṛdayacakra refers to one of the four divisions of the sahaja-puṭa (‘innate layer’), situated within the padma (lotus) in the middle of the Herukamaṇḍala. The 36 pairs of Ḍākinīs [viz., Uṣṇīṣā] and Vīras are reddish yellow in color; they each have one face and four arms; they hold a skull bowl, a skull staff, a small drum, and a knife.

Uṣṇiṣa.—cf. Prakrit uṃnisa (EI 20; LL), a coping stone. (EI 8), protuberance of the Buddha's skull. Note: uṣṇiṣa is defined in the “Indian epigraphical glossary” as it can be found on ancient inscriptions commonly written in Sanskrit, Prakrit or Dravidian languages.

[«previous (U) next»] — Ushnisha in Sanskrit glossary
Source: DDSA: The practical Sanskrit-English dictionary

(-ṣaḥ-ṣaṃ) 1. A turban. 2. A diadem. 3. A distinguishing cognate mark. 4. The curly hair with which a Budd'ha is born, and which indicates his future sanctity. E. uṣṇa heat, īṣ to oppose or injure, ka aff.

[«previous (U) next»] — Ushnisha in Hindi glossary
Source: DDSA: A practical Hindi-English dictionary

1) [noun] anything wound round the head, as a covering; a head-gear.

2) [noun] an ornamental head-dress worn by a king as a symbol of sovereignty or the one the idols of gods are dressed with; a crown.

3) [noun] a protuberance on the top of the head of effigies of accomplished saints (corresponding to the ಸಹಸ್ರಪದ್ಮ [sahasrapadma] of mysticism).

Chapter 57 - The images of the sages (muni-lakṣaṇa)

Mahāsudassana-suttanta < [Part 14 - Generosity and the other virtues]