Ushira means something in Hinduism, Sanskrit, Buddhism, Pali, Marathi, Jainism, Prakrit, biology. If you want to know the exact meaning, history, etymology or English translation of this term then check out the descriptions on this page. Add your comment or reference to a book if you want to contribute to this summary article.

The Sanskrit terms Uśīra and Uṣīra can be transliterated into English as Usira or Ushira, using the IAST transliteration scheme (?).

[«previous (U) next»] — Ushira in Ayurveda glossary
Source: Wisdom Library: Āyurveda and botany

Uśīra (उशीर):—A Sanskrit word referring to “Cuscus grass”, a perennial species of grass from the Poaceae (or Gramineae) family of flowering plants. It is used throughout Ayurvedic literature such as the Caraka-saṃhitā. It is also known by the names Sevya and Sugandhimūla. In the Prakrit language it is also known as Osīra. Its official botanical name is Chrysopogon zizanioides and is commonly known in english as “Cuscus grass”, “Khus” and “Vetiver” (Vetiveria zizanioides). It is native to India but is widely cultivated in the tropical regions of the world. Cuscus grass is used to fashion objects such as hats, baskets, cushions and other ornaments. The roots of the plant are used for making scented oils.

Uśīra (उशीर) refers to “cuscus”, mentioned in verse 3.52-53 of the Aṣṭāṅgahṛdayasaṃhitā (Sūtrasthāna) by Vāgbhaṭa.—Accordingly, “[...] when hungry, one shall turn to bitter, sweet, astringent, and light food, [...]; to water [...] devoid of dirt, (and) destructive of dirt [...] (and that is) neither causative of effusions nor rough, (but) nectar-like among the beverages etc.; (and)—beautifully adorned) with sandal, cuscus [viz., uśīra], camphor, pearls, garlands, and (fine) clothes— [...]”.

Uṣīra (उषीर) refers to a medicinal plant known as Vetiveria zizanioides Linn., and is mentioned in the 10th century Yogaśataka written by Pandita Vararuci.—The Yogaśataka of Pandita Vararuci is an example of this category. This book attracts reader by its very easy language and formulations which can be easily prepared and have small number of herbs (viz., Uṣīra). It describes only those formulations which are the most common and can be used in majority conditions of diseases.

Uṣīra (उषीर) is the name of a medicinal plant known as Vetiveria zizanoides, and used in Ayurveda to promote skin care and enhance the beauty of the skin (varṇya).

Uśīra (उशीर) refers to the medicinal plant known as “Vetiveria zizanioides (Linn.) Nash” and is dealt with in the 15th-century Yogasārasaṅgraha (Yogasara-saṅgraha) by Vāsudeva: an unpublished Keralite work representing an Ayurvedic compendium of medicinal recipes. The Yogasārasaṃgraha [mentioning uśīra] deals with entire recipes in the route of administration, and thus deals with the knowledge of pharmacy (bhaiṣajya-kalpanā) which is a branch of pharmacology (dravyaguṇa).

Uśīra (उशीर) is the name of a plant, the root of which is used in ritualistic worship, according to the Śivapurāṇa 2.1.11, while explaining the mode of worshipping Śiva:—“[...] fragrant root of the plant Uśīra and sandal-paste shall be put in the water for washing feet. Fine powders of Jātī, Kaṃkola, Karpūra, root of Vaṭa and Tamālaka should be put in the water intended for sipping. Sandal powder shall be put in all these nine vessels. Nandīśa, the divine Bull of Śiva shall be worshipped beside the lord Śiva. The latter shall be worshipped with scents, incense and different. [...]”.

[«previous (U) next»] — Ushira in Marathi glossary
Source: DDSA: The Molesworth Marathi and English Dictionary

[«previous (U) next»] — Ushira in Sanskrit glossary
Source: DDSA: The practical Sanskrit-English dictionary

-rī A sort of grass, a small sort of Saccharum.

Chapter 279 - The description of the potent remedies (siddha-auṣadha) 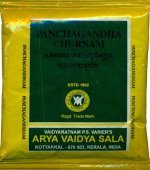