Unnata means something in Buddhism, Pali, Hinduism, Sanskrit, Jainism, Prakrit, the history of ancient India, Marathi, Hindi. If you want to know the exact meaning, history, etymology or English translation of this term then check out the descriptions on this page. Add your comment or reference to a book if you want to contribute to this summary article. 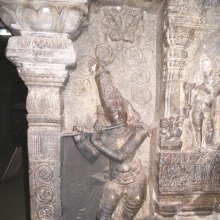 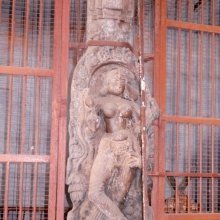 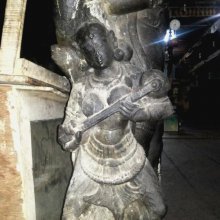 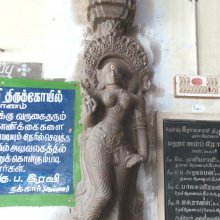 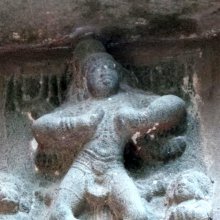 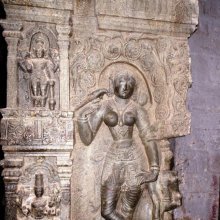 Unnata (उन्नत) refers to “very high”, referring to one of the characteristics of the mountain Kailāsa (the auspicious excellent mountainous abode of Śiva), according to the Śivapurāṇa 2.2.40.—Accordingly, as Brahmā narrated to Nārada:—“[...] accompanied by the gods, sages, Brahmā and others Viṣṇu went to Kailāsa, the auspicious excellent mountainous abode of Śiva. Kailāsa was a favourite abode of the lord where Kinnaras, Apsaras, Siddhas and other divine beings stayed. It was very high [i.e., unnata]. Kailāsa was brilliant with many peaks full of precious gems all round. [...]”.

2) Unnata (उन्नत, “raised”) refers to a specific gesture (āṅgika) made with the sides (pārśva), according to the Nāṭyaśāstra chapter 10. The sides are one of the six major limbs (aṅga) used to perform certain gestures (āṅgika). These gestures form a part of the histrionic representation (abhinaya).

1) Unnatā (उन्नता).—A type of gesture (āṅgika) made with the neck (grīvā);—Instructions: neck with the face upturned. Uses: in looking up.

2) Unnata (उन्नत, “raised”).—A type of gesture (āṅgika) made with the sides (pārśva);—(Instructions): The other side [on the assumption of the Nata position] will be Unnata (raised), [because in relation of it] the waist, the side, the arm and the shoulder will be raised. (Uses): In going backwards.

Unnatā (उन्नता) refers to a “raised up (line)”.—The Sanskrit texts have generally paid much more attention to the goddess as Speech in deference to the primacy always attributed to it over the written word. Even so, we do find rare references to the goddess as the Line—Rekhā. The Line in its three forms—straight, slanted (tiryañc-rekhā) and “raised up” (unnatā) that constitute the sides of the Triangle, are the three energies and goddesses in which Kubjikā manifests as the Triangle and in which see rests as the Spiral. These are synthesized as aspects of the goddess manifesting progressively to assume the form of a Triangle set in three dimensions commonly represented by a water chestnut (śṛṅgāta).

Unnatā (उन्नता) refers to “raised” (e.g., those Ketus having a raised tail), according to the Bṛhatsaṃhitā (chapter 11), an encyclopedic Sanskrit work written by Varāhamihira mainly focusing on the science of ancient Indian astronomy astronomy (Jyotiṣa).— Accordingly, “Jala Ketu is a comet which appears in the west with a raised tail [i.e., unnatā—śikhayāpareṇa connatayā]; it is glossy, when it appears there will be prosperity in the land for 9 months, and the world will be freed from all miseries. Bhava Ketu is a comet visible only for a single night and in the east, possessing a small disc; it is glossy; the tail is bent like that of a lion. There will be unprecedented happiness in the land for as many months as the number of hours for which it continues to be visible; if it should be fearful to look at, fatal diseases will afflict mankind”.

[«previous (U) next»] — Unnata in Ganitashastra glossary
Source: archive.org: Science And Technology In Medievel India (Math)

Unnata (उन्नत) or Unnatavṛtta refers to a “convex surface” representing one of the eight divisions of a circle (vṛtta), as described in the Kṣetragaṇitaśāstra, as mentioned in A. Rahman’s Science and Technology in Medievel India: A bibliography of source materials in Sanskrit, Arabic and Persian.—Ancient and medieval India produced a wide range of scientific manuscripts and major contributions lie in the field of medicine, astronomy and mathematics, besides covering encyclopedic glossaries and technical dictionaries.—The Kṣetragaṇita-śāstra is a Sanskrit mathematical treatise dealing with the art of measuring lands, containing well-defined and established technical terms [e.g., Unnata-vṛtta] wanted for practical use in the Tamil language.

Unnata (उन्नत) is the name of a Buddha under whom Śākyamuni (or Gautama, ‘the historical Buddha’) acquired merit along the first through nine bhūmis, according to the Mahāvastu. There are in total ten bhūmis representing the ten stages of the Bodhisattva’s path towards enlightenment.

Unnata is but one among the 500 Buddhas enumerated in the Mahāvastu during a conversation between Mahākātyāyana and Mahākāśyapa, both principle disciples of Gautama Buddha. The Mahāvastu is an important text of the Lokottaravāda school of buddhism, dating from the 2nd century BCE.

Unnata (उन्नत) refers to “(one who is) proud”, according to Mahāprajñāpāramitāśāstra (chapter 41).—Accordingly, “[Digression on a case brought against the Buddha; B. The defense].—[1. Meeting With The Heretics].—Entering into an assembly of heretics, the Buddha knew well that he would not be believed nor accepted in the present lifetime (ihajanman), but he wanted to plant great roots of good (mahānidāna) for future lifetimes (parajanman—parajanmani). Moreover, he wanted to put an end to the slander of the heretics who said: ‘The Buddha is proud (unnata)’. This is the reason why he went personally into their assemblies. [...]”.

2) Unnata (उन्नत) refers to “high” (as opposed to Nata—‘low’), according to the Gaganagañjaparipṛcchā.—Accordingly, “How then, son of good family, the Bodhisattva, having accumulated immeasurable merits, nourishes all living beings? Son of good family, [...] (7) his thoughts are like an earth since there is no high or low (nata-unnata) in his mind; (8) he is free from thoughts by pure morality; (9) his thought is liberated and the gate is free from hindrance by accomplishing all sacrifices; (10) he has perfected memory and eloquence by investigating the dharma; (11) he depends on the knowledge of supernatural powers by going to immeasurable Buddha-fields”.

Unnata (उन्नत) is the name of a Kinnara mentioned as attending the teachings in the 6th century Mañjuśrīmūlakalpa: one of the largest Kriyā Tantras devoted to Mañjuśrī (the Bodhisattva of wisdom) representing an encyclopedia of knowledge primarily concerned with ritualistic elements in Buddhism. The teachings in this text originate from Mañjuśrī and were taught to and by Buddha Śākyamuni in the presence of a large audience (including Unnata).

Unnata (उन्नत, “bent up”) refers to one of the “twenty form objects” (rūpa) as defined in the Dharma-saṃgraha (section 34). The Dharma-samgraha (Dharmasangraha) is an extensive glossary of Buddhist technical terms in Sanskrit (e.g., unnata). The work is attributed to Nagarjuna who lived around the 2nd century A.D.

[«previous (U) next»] — Unnata in Jainism glossary
Source: The University of Sydney: A study of the Twelve Reflections

Unnata (उन्नत) (or Ūrjita) refers to a “great (burning)”, according to the 11th century Jñānārṇava, a treatise on Jain Yoga in roughly 2200 Sanskrit verses composed by Śubhacandra.—Accordingly, “Those possessions which are pitiless, having imparted a great burning (unnata—dattvā dāham unnatam) in the heart of men, certainly will go away. How could they be for your pleasure?”.

Unnata.—(IE 8-5), high land. Note: unnata is defined in the “Indian epigraphical glossary” as it can be found on ancient inscriptions commonly written in Sanskrit, Prakrit or Dravidian languages.

[«previous (U) next»] — Unnata in Marathi glossary
Source: DDSA: The Molesworth Marathi and English Dictionary

[«previous (U) next»] — Unnata in Sanskrit glossary
Source: DDSA: The practical Sanskrit-English dictionary

3) [v.s. ...] having a large hump, humpbacked (as a bull), [Vājasaneyi-saṃhitā; Taittirīya-saṃhitā; Lāṭyāyana]

[«previous (U) next»] — Unnata in Hindi glossary
Source: DDSA: A practical Hindi-English dictionary

Unnata (ಉನ್ನತ):—[noun] a man of excellence, eminence or noble quality.