Trivikrama means something in Hinduism, Sanskrit, the history of ancient India. If you want to know the exact meaning, history, etymology or English translation of this term then check out the descriptions on this page. Add your comment or reference to a book if you want to contribute to this summary article. 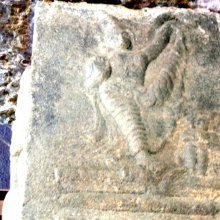 One of the 108 names of Krishna; Meaning: "Conqueror Of All The Three Worlds"

Trivikrama (त्रिविक्रम).—According to Śrī Caitanya Caritāmṛta, Madya-lila 9.21-22, “At the holy place known as Skanda-kṣetra, Lord Śrī Caitanya Mahāprabhu visited the temple of Skanda. From there He went to Trimaṭha, where He saw the Viṣṇu Deity Trivikrama. After visiting the temple of Trivikrama, the Lord returned to Siddhavaṭa, where He again visited the house of the brāhmaṇa, who was now constantly chanting the Hare Kṛṣṇa mahā-mantra.”.

A Trivikrama stone bears the mark of a circle on the left side, that of a line on the right side and is of a dark-blue colour.

Trivikrama (त्रिविक्रम).—An avatār of Viṣṇu who conquered the three worlds with three steps; the lustrous God with sword as weapon;1 Mahātmyam of; in the vāmana purāṇa; icon of;2 Brahma-Puruṣottama.3

Trivikrama (त्रिविक्रम, “He who pervades the 3 Vedas”):—One of the twenty-four forms of Viṣṇu through which Nārāyaṇa manifests himself. He is accompanied by a counterpart emanation of Lakṣmī (an aspect of Devī) who goes by the name Kriyā.

Trivikrama (त्रिविक्रम) refers to one of the various Vibhava manifestations according to the Īśvarasaṃhitā 24.316b-319.—Accordingly, “Bhagavān who is Ananta and who is present in the waking and other state, controls those who have the brilliance of the sun, moon and fire, stays with the glory of sentience of the fourth stage (transcendental). He prompts out of His own liking, the power which has the brilliance (like) nectar arising from His feet and which causes delight to those who do their work and are devoted to Him, who fill the three worlds, is of a yellowish complexion, shining (having) groups of arms possessing various mudrās and weapons, who destroys enemies bearing ākaśagaṅgā with the stiff foot reaching the sky and a flag for (the sake of) Gods who requested for victory, sword, discus, mace, club, arrows, goad (with) and hammer, lance, axe, and a fire slab in His ten dexter hands and conch, javelin, bow (called Śārṅga), snare, trident, plant, thunderbolt, knife plough, big pestle in the left hands are to be meditated upon. Other ten hands with mudrās are marked by (conveying) the fear wonder taking mud, and seizing (a person) by the (braid of) hair and clasping are the five mudrās of the Lord to be meditated upon in the five (left) hands and those offering the boon with the name prosperity, bringing things together, offering security and preservation of the same number in the right hands”.

These Vibhavas (e.g., Trivikrama) represent the third of the five-fold manifestation of the Supreme Consciousness the Pāñcarātrins believe in. Note: The name Trivikrama is given to Vāmana who grew up and took three strides (krama). Parāśarabhaṭṭa Viṣṇusahasranāma vyākhyā on Name 533. gives a different interpreation by quoting a passage the source of which is not known. This means that Viṣṇu had passed through all the three Vedas or had gone beyond them. The root kram means to walk over, cross over. The word Vikrama cannot therefore mean studying the three Vedas but has gone beyond them, prominent in them.

Trivikrama (त्रिविक्रम) refers to one of the many varieties of the Śālagrāma (ammonite fossil stones).—The Trivikrama is black in colour (śyāma); two cakras on the left side (vāma-cakra) and two cakras on the right (dakṣa-cakra); line suggesting vanamālā; according to another account, a cakra on the left side and line on the right (dakṣa-rekhā); rightward inclination (dakṣiṇāvarta). Śālagrāma stones are very ancient geological specimens, rendered rounded and smooth by water-currents in a great length of time. They (e.g., Trivikrama stones) are distinguished by the ammonite (śālā, described as “vajra-kīṭa”, “adamantine worms”) which having entered into them for residence, are fossilized in course of time, leaving discus-like marks inside the stone.

Trivikrama (त्रिविक्रम) is also found as a sculpture on the ninth pillar of the southern half of the maṇḍapa of the temple of Trailokyeśvara.—At the lower portion of the pillar is sculptured Viṣṇu, Trivikrama. The God asking Bali to donate him three feet of land is the theme of this image. Viṣṇu is standing with one foot on the earth and the other in the sky. To the right is the chain of human figures, carved one below the other. At the bottom of the tableau is an unfinished image, probably of Garuḍa. The swings and sways of this figure of Viṣṇu Trivikrama remind us the dancing figure of Śiva on the pillar nearby. We think probably the same artist must have carved this representation too.

Trivikrama (त्रिविक्रम) or Trivikramarasa is the name of a Ayurvedic recipe defined in the fifth volume of the Rasajalanidhi (chapter 11, Gulma: tumour in the belly). These remedies are classified as Iatrochemistry and form part of the ancient Indian science known as Rasaśāstra (medical alchemy). However, since it is an ayurveda treatment it should be taken with caution and in accordance with rules laid down in the texts.

Accordingly, when using such recipes (e.g., trivikrama-rasa): “the minerals (uparasa), poisons (viṣa), and other drugs (except herbs), referred to as ingredients of medicines, are to be duly purified and incinerated, as the case may be, in accordance with the processes laid out in the texts.” (see introduction to Iatro chemical medicines)

[«previous (T) next»] — Trivikrama in Hinduism glossary
Source: Shodhganga: Historical setting of the vaisnava divyaksetras in the southern pandya country

Trivikrama (त्रिविक्रम) is the elongated version of Vāmana, the Dwarf;

[«previous (T) next»] — Trivikrama in India history glossary
Source: What is India: Inscriptions of the Śilāhāras

Trivikrama (fl. 1137 A.D.) is mentioned in the “Vaḍavalī grant of Aparāditya I”. Accordingly, “... by pouring water with great devotion, to the sacrificing priest Trivikrama, the son of the Agnihotrin Ananta of the Vārṣeyagaṇa-gotra and the Vāji-Mādhyandina-śākhā, who is a distinguished Brāhmaṇa engaged in the performance of the six duties such as sacrificing for oneself and others, studying and teaching (of the sacred texts) and so forth”.

These copper plates (mentioning Trivikrama) were in the possession of a blacksmith at Vaḍavalī near Ṭhāṇā. Its object is to record the grant, by Aparāditya, of the village Vaḍavalī in the Karakūṭa-viṣaya and also of a field in the village Mora in the Vareṭikā-viṣaya. It is dated on the fifteenth tithi of the bright fortnight of Kārttika in the Śaka year 1049, the cyclic year being Plavaṅga.

Trivikrama (त्रिविक्रम).—Viṣṇu in his fifth or dwarf incarnation. °रसः (rasaḥ) a patent medicine in Āyurveda.

Trivikrama is a Sanskrit compound consisting of the terms tri and vikrama (विक्रम).

(-maḥ) A name of Vishnu. E. tri, and vikrama going; crossing over the three worlds in three steps, to the discomfiture of Bali.

Trivikrama is a Sanskrit compound consisting of the terms tri and vikrama (विक्रम).

Trivikrama (त्रिविक्रम) in the Sanskrit language is related to the Prakrit word: Tivikkama.

Trivikrama (ತ್ರಿವಿಕ್ರಮ):—[noun] one of the forms of Viṣṇu, in which he pervaded the earth, lower region and the heaven, each by a gigantic step.

Search found 50 books and stories containing Trivikrama, Tri-vikrama; (plurals include: Trivikramas, vikramas). You can also click to the full overview containing English textual excerpts. Below are direct links for the most relevant articles:

Chapter 13 - Staying at the confluence of rivers Bhīmā and Amarajā

Chapter 14 - Instruction about learning the Vedas

Chapter 31 - Mode of cleansing oneself and others