Timingala means something in Hinduism, Sanskrit, Buddhism, Pali. If you want to know the exact meaning, history, etymology or English translation of this term then check out the descriptions on this page. Add your comment or reference to a book if you want to contribute to this summary article. 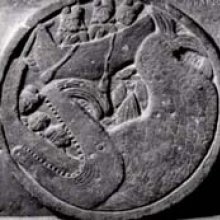 Timiṅgala (तिमिङ्गल) is a Sanskrit word referring to the animal “estuarine crocodile”. The meat of this animal is part of the māṃsavarga (‘group of flesh’), which is used throughout Ayurvedic literature. The animal Timiṅgala is part of the sub-group named Vāriśaya, refering to animals “living in waters”. It was classified by Caraka in his Carakasaṃhitā sūtrasthāna (chapter 27), a classical Ayurvedic work. Caraka defined such groups (vargas) based on the dietic properties of the substance.

Timiṅgala (तिमिङ्गल)—Sanskrit word for a fish; a species of large whales (fabulous). This animal is from the group called Sāmudra-matsya (‘marine fish’). Sāmudra-matsya itself is a sub-group of the group of animals known as Ānupa (those that frequent marshy places).

In the Jain canonical work the Nāyādhammakahāo (17) ships were also attacked by whales of enormous size known as timiṅgala (“swallowing the ocean”), and other water animals which could not be prevented by beating drums or burning fire (Guṇacandragaṇi’s Kahārayaṇakosa, Sujayarājarṣikathānaka).

Search found 5 books and stories containing Timingala, Timiṅgala; (plurals include: Timingalas, Timiṅgalas). You can also click to the full overview containing English textual excerpts. Below are direct links for the most relevant articles:

Appendix 3 - Identification of Makara, king of the fish (matsyarāja) < [Chapter XIII - The Buddha-fields]

Eight wonderful things about this Dhamma and Vinaya < [19. Suspending the Observance (Uposathaṭṭhāpana)]