Tarjani means something in Buddhism, Pali, Hinduism, Sanskrit, Marathi, Hindi. If you want to know the exact meaning, history, etymology or English translation of this term then check out the descriptions on this page. Add your comment or reference to a book if you want to contribute to this summary article. 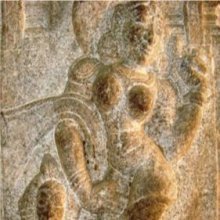 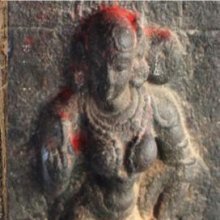 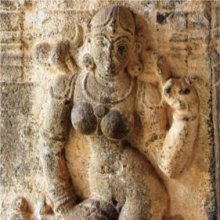 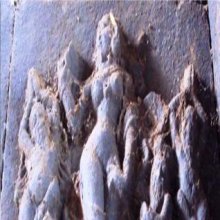 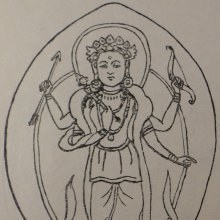 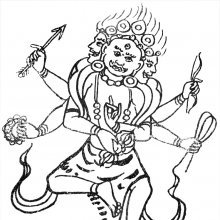 Tarjanī (तर्जनी) or Tarjanīhasta refers to “underline, warn” and represents one of the twenty-four gestures with a single hand, as defined according to texts dealing with śilpa (arts and crafs), known as śilpaśāstras.—Accordingly, pratimā-lakṣaṇa (body postures of the icons) is comprised of hand gestures (hasta, mudrā or kai-amaiti), stances/poses (āsanas) and inflexions of the body (bhaṅgas). There are thirty-two types of hands [viz., tarjanī-hasta] classified into two major groups known as tolirkai (functional and expressive gestures) and elirkai (graceful posture of the hand).

1) Tarjanī (तर्जनी) is the name of Dūtī (i.e., messengers of Lord Vajrapāṇi) mentioned as attending the teachings in the 6th century Mañjuśrīmūlakalpa: one of the largest Kriyā Tantras devoted to Mañjuśrī (the Bodhisattva of wisdom) representing an encyclopedia of knowledge primarily concerned with ritualistic elements in Buddhism. The teachings in this text originate from Mañjuśrī and were taught to and by Buddha Śākyamuni in the presence of a large audience (including Tarjanī).

Tarjanī (तर्जनी) refers to a “threatening hand posture” and represents one of the gestures made with the left hand of Heruka: one of the main deities of the Herukamaṇḍala described in the 10th century Ḍākārṇava chapter 15. Heruka is positioned in the Lotus (padma) at the center; He is the origin of all heroes; He has 17 faces (with three eyes on each) and 76 arms [exhibiting, for example, tarjanī]; He is half black and half green in color; He is dancing on a flaming sun placed on Bhairava and Kālarātrī.

Tarjanī (तर्जनी) refers to a “threatening finger” (pointing in the direction of all defilement), according to the Cakrasaṃvara Samādhi [i.e., Cakrasamvara Meditation] ritual often performed in combination with the Cakrasaṃvara Samādhi, which refers to the primary pūjā and sādhanā practice of Newah Mahāyāna-Vajrayāna Buddhists in Nepal.—Accordingly, “[...] Six joyful seals, the foremost of them (being) her holiness, Colored red, with one face, two arms, and three eyes, Naked with loose hair, (and) partly adorned with a girdle, The left arm embracing, holding in a skull bowl, sin and death for eating, On the right a threatening finger (tarjanī) pointing in the direction of all defilement, Sounding the thunder of an impending kalpa-fire of great majesty, With the bloody opening (between) both hips penetrated by (her) hero, One who loves great pleasure, belonging to the nature of compassion”.

Tarjani (ತರ್ಜನಿ):—[noun] the finger nearest the thumb (used to point something or someone at); the forefinger; the index finger.

Search found 7 books and stories containing Tarjani, Tarjanī; (plurals include: Tarjanis, Tarjanīs). You can also click to the full overview containing English textual excerpts. Below are direct links for the most relevant articles:

Chapter 50 - Characteristics of an image of the Goddess