Tandava means something in Hinduism, Sanskrit, the history of ancient India, Marathi, Jainism, Prakrit. If you want to know the exact meaning, history, etymology or English translation of this term then check out the descriptions on this page. Add your comment or reference to a book if you want to contribute to this summary article. 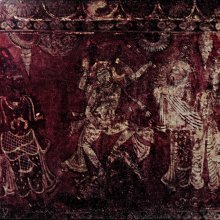 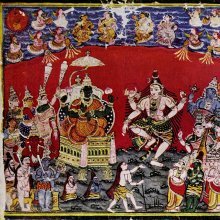 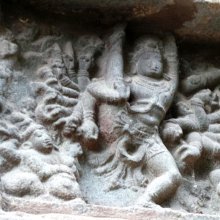 Tāṇḍava refers to “dance with jumping/leaping movements” is explained in the Tāṇḍava-tāla-marapu, the second part of the Niruttamarapu (“literary usage of dance”) which represents the third book of the Pañcamarapu (‘five-fold traditional usage’): an important piece of Tamil literature.—The sixteen types of tāṇḍava that were danced by Śiva and Kālī in a place called Ālankāṭu are said to have expressed the characters and navarasas of akam in their dance and this aspect is known as akamarga (exposition by gesture and dancing of the three characters, namely sattva (yogic), rajas (majestic) and tāmas (powerful and aggressive).

Tāṇḍava.—(CII 4), name of the dance of Śiva. Note: tāṇḍava is defined in the “Indian epigraphical glossary” as it can be found on ancient inscriptions commonly written in Sanskrit, Prakrit or Dravidian languages.

tāṇḍava (तांडव).—n (S) Dancing with violent gesticulation: (as that of Shiva and his votaries.) 2 Exaggeration; aggravating and harping upon; wild dancing about, or great cry and fuss upon, a little matter; storming and stamping. 3 Amplification or embellishing diffusion (as of a text or a tale.)

(-vaḥ-vaṃ) 1. Dancing, especially with violent gesticulation, and particularly applied to the frantic dance of the god Siva, and his votaries. 2. A sort of grass, (Saccharum procerum.) m.

(-vaḥ) In prosody, a tribrach or foot of three sort syllables. E. taṇḍu the name of the Muni, by whom the style of dancing was first taught, affix aṇ, or taḍi to beat, and ava aff.

Tāṇḍava (ताण्डव).—[substantive] a wild dance, [especially] of the god Śiva.

3) [noun] (fig.) any uncontrollable and extreme disaster (as a natural calamity, an unabated act of terrorists, etc.) that results in great loss and grief.

Verse 3.3.212 < [Chapter 3 - Mahāprabhu’s Deliverance of Sarvabhauma, Exhibition of His Six-armed Form, and Journey to Bengal]

Verse 2.26.69 < [Chapter 26 - Descriptions of the Mercy Bestowed on Śuklāmbara and Vijay and the Lord’s Desire to Accept Sannyāsa]