Surasa means something in Buddhism, Pali, Hinduism, Sanskrit, Marathi, Jainism, Prakrit, Hindi, biology. If you want to know the exact meaning, history, etymology or English translation of this term then check out the descriptions on this page. Add your comment or reference to a book if you want to contribute to this summary article.

Alternative spellings of this word include Suras. 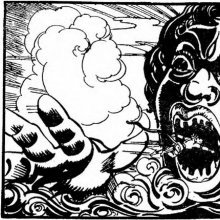 1) Surasā (सुरसा) is another name for Tulasī, which is a Sanskrit word referring to Ocimum tenuiflorum (holy basil), from the Lamiaceae family. It is classified as a medicinal plant in the system of Āyurveda (science of Indian medicine) and is used throughout literature such as the Suśrutasaṃhita and the Carakasaṃhitā. The synonym was identified in the Rājanighaṇṭu (verses 10.148-149), which is a 13th century medicinal thesaurus.

2) Surasa (सुरस, “sweet”) is a synonym for Sinduvāra, which is a Sanskrit name for a medicinal plant (either Vitex Negundo or Vitex trifolia). It is a technical term used throughout Ayurvedic literature such as the Caraka-saṃhitā and the Suśruta-saṃhitā. This synonym was identified by Amarasiṃha in his Amarakośa (a Sanskrit botanical thesaurus from the 4th century).

Surasa in the Sanskrit language is the name of a plant identified with Pluchea lanceolata (DC.) C.B.Clarke from the Asteraceae (Sunflower) family having the following synonyms: Berthelotia lanceolata. For the possible medicinal usage of surasa, you can check this page for potential sources and references, although be aware that any some or none of the side-effects may not be mentioned here, wether they be harmful or beneficial to health.

1) Surasā (सुरसा) is another name for Miśreyā, an unidentified medicinal plant possibly identified with Foeniculum vulgare (synonym Foeniculum capillaceum) or “fennel”, from the Apiaceae (Umbelliferae) or “carrot family” of flowering plants, according to verse 4.14-19 of the 13th-century Raj Nighantu or Rājanighaṇṭu. The fourth chapter (śatāhvādi-varga) of this book enumerates eighty varieties of small plants (pṛthu-kṣupa). Also see Śatāhvā. Together with the names Surasā and Miśreyā, there are a total of fifteen Sanskrit synonyms identified for this plant.

2) Surasā (सुरसा) is also mentioned as a synonym for Mahāśatāvarī, a medicinal plant identified with either Asparagus gonocladus Baker. or Asparagus sarmentosus Linn., both from the Asparagaceae family of flowering plants, according to verse 4.120-123.  Notes: Mahāśatāvarī is the bigger variety of Śatāvarī, identified with Asparagus racemosus Willed. (or “buttermilk root”). Together with the names Surasā and Mahāśatāvarī, there are a total of eleven Sanskrit synonyms identified for this plant.

3) Surasā (सुरसा) is also mentioned as a synonym for Brāhmī, a medicinal plant identified with two possibly species verse, according to verse 5.63-66. The fifth chapter (parpaṭādi-varga) of this book enumerates sixty varieties of smaller plants (kṣudra-kṣupa). Together with the names Suvarcalā and Brāhmī, there are a total of twenty-four Sanskrit synonyms identified for this plant. Note: Chopra identifies Brāhmī with 1) Centella asiatica (Linn.) Urban. while Bāpālāl and Th. B.S. et al identify it with 2) Bacopa monnieri (Linn.) Pennell.

Surasā (सुरसा) is the name of a mind-born ‘divine mother’ (mātṛ), created for the purpose of drinking the blood of the Andhaka demons, according to the Matsya-purāṇa 179.8. The Andhaka demons spawned out of every drop of blood spilled from the original Andhakāsura (Andhaka-demon). According to the Matsya-purāṇa 179.35, “Most terrible they (e.g., Surasā) all drank the blood of those Andhakas and become exceedingly satiated.”

1) Surasā (सुरसा) is the name of a river mentioned in a list of rivers, flowing from the five great mountains (Śailavarṇa, Mālākhya, Korajaska, Triparṇa and Nīla), according to the Varāhapurāṇa chapter 82. Those who drink the waters of these rivers live for ten thousand years and become devotees of Rudra and Umā.

2) Surasā (सुरसा).—Name of a river originating from Ṛkṣa, a holy mountain (kulaparvata) in Bhārata, according to the Varāhapurāṇa chapter 85. There are settlements (janapada) where Āryas and Mlecchas dwell who drink water from these rivers.

One of the five mountains situated near Bhadrāśva, according to the Varāhapurāṇa chapter 82. The Varāhapurāṇa is categorised as a Mahāpurāṇa, a type of Sanskrit literature preserving ancient India’s vast cultural history, instructions for religious ceremonies and a whole range of topics concerning the various arts and sciences. The original text is said to have been composed of 24,000 metrical verses, possibly originating from before the 10th century.

Surasā was born from the wrath of Krodhavaśā and the former had three daughters called Analā, Ruhā and Vīrudhā. (Ādi Parva, Chapter 66, Verse 61). Obstructed the passage of Hanūmān. To test whether Hanūmān, who jumped into Laṅkā to seek out Sītā, possessed power enough for the purpose, Devagandharvas backoned Surasā to them and told her as follows: "You mother of nāgas, do please assume a terrible form like a big mountain and appear before Hanūmān and obstruct his passage. As soon as she heard the injunction, she jumped before Hanūmān and attempted to devour him. In spite of Hanūmān’s earnest pleadings she stood before him with her mouth opened wide. Hanūmān then, by his power of illusion, grew ten yojanas in size. Then Surasā opened her mouth twenty yojanas wide. Hanūmān then grew thirty yojanas in size and Surasā opened her mouth forty yojanas wide. In this competition ultimately when Surasā opened her mouth hundred yojanas wide, Hanūmān reduced his size to that of a finger, entered Surasā’s mouth and came out through her ear. Surasā was pleased and blessed Hanūmān. (Vālmīki Rāmāyaṇa, Sundara Kāṇḍa, Canto 1). Other information.

(i) Surasā lives in the court of Brahmā worshipping him. (Sabhā Parva, Chapter 11, Verse 39).

(ii) Rohiṇī, mother of Balabhadrarāma, was an incarnation of Surasā. (Devī Bhāgavata, Skandha 4). (See full article at Story of Surasā from the Puranic encyclopaedia by Vettam Mani)

1d) A mountain west of the Śitoda.*

2b) A daughter of Dakṣa and one of the 13 wives of Kaśyapa; mother of Yātudhānas and 1000 snakes, of which 26 are chiefs; all these had sons and grandsons most of which were killed in the sacrifice of Janamejaya;1 in the chariot of Tripurāri.2

Surasa (सुरस) is a name mentioned in the Mahābhārata (cf. I.52.8, I.57, I.61.56) and represents one of the many proper names used for people and places. Note: The Mahābhārata (mentioning Surasa) is a Sanskrit epic poem consisting of 100,000 ślokas (metrical verses) and is over 2000 years old.

Surasā also refers to the name of a Lady mentioned in the Mahābhārata (cf. ).

Surasa (सुरस) refers to “elegantly (seated) (on a lofty couch)”, according to the King Vatsarāja’s Pūjāstuti called the Kāmasiddhistuti (also Vāmakeśvarīstuti), guiding one through the worship of the Goddess Nityā.—Accordingly, “[...] She is elegantly seated (surasa-upaviṣṭā) on a lofty couch studded with jewels, furnished with seats and pillows, and decorated with a canopy of pearls. Her face is a fully developed lotus. She has a row of chowries being shaken around her, and her beaming lotus-face surpasses beautiful lotuses. [...]”.

1) Surasā (सुरसा) is the name of Vidyārājñī (i.e., “wisdom queen”) mentioned as attending the teachings in the 6th century Mañjuśrīmūlakalpa: one of the largest Kriyā Tantras devoted to Mañjuśrī (the Bodhisattva of wisdom) representing an encyclopedia of knowledge primarily concerned with ritualistic elements in Buddhism. The teachings in this text originate from Mañjuśrī and were taught to and by Buddha Śākyamuni in the presence of a large audience (including Surasā).

Surasa (सुरस) refers to “juicy” (flowers and fruits), according to the Vajratuṇḍasamayakalparāja, an ancient Buddhist ritual manual on agriculture from the 5th-century (or earlier), containing various instructions for the Sangha to provide agriculture-related services to laypeople including rain-making, weather control and crop protection.—Accordingly, [As the Bhagavān teaches an offering manual]: “[...] All crops, all flowers and fruits will be well protected. [...] Until the stake is drawn out there will be comfort and plenty, and all crops, flowers and fruits develop. They will be juicy (surasa) and tender. All Nāgas will constantly provide protection, shelter and safeguard. [...]”.

surasā (सुरसा).—m A double-pointed nail, a nail tapering from the middle towards both extremities, a toggel.

3) elegant (as a composition).

Surasa is a Sanskrit compound consisting of the terms su and rasa (रस).

Surasa is a Sanskrit compound consisting of the terms su and rasa (रस).

2) Surasā (सुरसा) [Also spelled sursa]:—(nf) mythologically, a monstrous figure said to be the mother of snakes, who blocked Hanuman's expedition to [laṃkā] trying to devour him by opening her mouth wider than Hanuman's increasing size.

2) [adjective] having scintillating sentiment or sentiments.

Chapter 5.4 - The story of Surasa and Hanuman

Chapter 2.6 - Genesis of birds and animals in the Purana

Chapter 2.5 - The origin of the flora and fauna in the Puranas