Sumantra means something in Hinduism, Sanskrit, the history of ancient India. If you want to know the exact meaning, history, etymology or English translation of this term then check out the descriptions on this page. Add your comment or reference to a book if you want to contribute to this summary article. 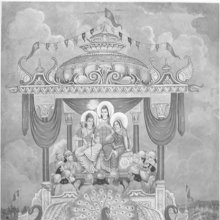 Sumantra (सुमन्त्र) is the name of a minister of king Harivara, according to the Kathāsaritsāgara, chapter 52. Accordingly as Ambikā said to Jīvadatta in bodily form: “... and the king [Harivara] remained day and night with his mind fixed on her [Anaṅgaprabhā], and entrusted the great burden of his kingdom to his minister named Sumantra”.

The story of Sumantra was told by Gomukha in order to demonstrate that “divine beings fall by virtue of a curse, and, owing to the consequences of their own wickedness, are incarnate in the world of men, and after reaping the fruit appropriate to their bad conduct they again go to their own home on account of previously acquired merit”.

The Kathāsaritsāgara (‘ocean of streams of story’), mentioning Sumantra, is a famous Sanskrit epic story revolving around prince Naravāhanadatta and his quest to become the emperor of the vidyādharas (celestial beings). The work is said to have been an adaptation of Guṇāḍhya’s Bṛhatkathā consisting of 100,000 verses, which in turn is part of a larger work containing 700,000 verses.

Sumantra (सुमन्त्र).—A minister of king Daśaratha of Ayodhyā. The king had eight ministers called Jayanta, Dhṛṣṭi, Vijaya, Siddhārtha. Arthasādhaka, Aśoka, Mantrapāla and Sumantra and two priests called Vasiṣṭha and Vāmadeva. (Vālmīki Rāmāyaṇa, Bālakāṇḍa, Canto 7). Sumantra was the right-hand-man of Dasaratha in all his activities. It was Sumantra who brought down to the palace sage Ṛṣyaśṛṅga for the yajña conducted by the king to have issues. According to chapter 12, Virāṭa Parva of Mahābhārata (Southern Text) Sumantra was Daśaratha’s charioteer as well.

Sumantra was the charioteer and one of the ministers of King Dasharatha of Ayodhya. It was he who suggests that the King utilize the services of the sage Rishyashringa to perform the Ashwamedha sacrifice. Dasharatha wanted to perform this sacrifice for the purpose of obtaining issue. [Rama:1.9]

Sumantra.—(HD), king's counsellor on matters relating to income and expenditure. See Hist. Dharm., Vol. III, p. 114, note 150. Note: sumantra is defined in the “Indian epigraphical glossary” as it can be found on ancient inscriptions commonly written in Sanskrit, Prakrit or Dravidian languages.

Sumantra is a Sanskrit compound consisting of the terms su and mantra (मन्त्र).

Search found 16 books and stories containing Sumantra, Su-mantra; (plurals include: Sumantras, mantras). You can also click to the full overview containing English textual excerpts. Below are direct links for the most relevant articles:

The Ramayana of Valmiki (by Hari Prasad Shastri)