Subrahmanya means something in Hinduism, Sanskrit. If you want to know the exact meaning, history, etymology or English translation of this term then check out the descriptions on this page. Add your comment or reference to a book if you want to contribute to this summary article. 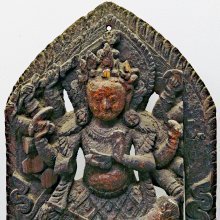 1) Subrahmaṇya is almost exclusively a South Indian deity. There is not a village, however small, which does not possess a shrine for Subrahmaṇya. In face the popularity of this deity with the South Indian is so great as to induce him to build shrines for him in all places such as towns, villages, gardens, mountain tops and other odd places. strangely enough Subrahmaṇya is less known and less worshipped in Northern India; there are not many temples of this god in Northern India. In Bengal it is stated that he is worshipped by disreputable women on certain occasions, while in the Bombay Presidency no sumaṅgali (a woman whose husband is alive) would visit the temple of Kārttikeyasvāmin (Subrahmaṇya).

The āgamas state that the temple for Subrahmaṇya may be constructed on all sides of a town except the east and it might face any direction. These temples may be built in captial cities, in towns, villages, on the tops of mountains, on the banks of rivers, in gardens, forests or under large trees. They may stand separately as svayampradhāna temple or be attached to some others, such as that of Śiva. Different kinds of central shrines are prescribed for the temple of Subrahmaṇya; these may contain from one to seven talas (storeys) and may be surrounded by prākāras or circuits and adorned wityh maṇḍapas or pavillions, and other adjuncts. As usual the size of the shrine of this god is also determined with reference to the height of the image to be set up in it. The temples of Subrahmaṇya are to be adorned with either peacocks or elephants placed in the corners of the vimāna, where generally Garuḍa or Nandi is seen in the temple of Viṣṇu or Śiva respectively.

In a svayampradhāna temple of Subrahmaṇya there are required to be set up eight parivāra-devatas, namely,

Besides the parivāra-devatās mentioned above, the temple of Subrahmaṇya is required to have eight śarīra-pālakās or body-guards. They are named

Corresponding to the various names of Subrahmaṇya are images whose descriptions are found in almost all the āgamas. The following are some of the important aspects of Subrahmaṇya dealth with in the Kumāra-tantra, viz.,

2) Subrahmaṇya (aspect of Skanda (Subrahmaṇya?), according to the Kumāra-tantra). This aspect should be of the colour of Kuṅkuma (saffron) and be adorned with keyūra, hāra and other ornaments. One of the right hands should be held in the abhaya and in the rest must be the śakti, kukkuṭa, and a padma. The colour of this aspect of the deity should be that of the rising sun and that of the sandal paste and the clothing red. Or, the figure may have only two arms of which one should rest upon the hip (kaṭyavalambita) and the other hand be held in the abhaya pose.

Subrahmaṇya (सुब्रह्मण्य) is the name of a deity depicted in various temples:

The Adi Kumbeswarar Temple (Ādi Kumbheśvara) in Kumbakonam (Kumbhakonam), [another Śiva temple].—Subrahmaṇya is found seated in sukhāsana with six pairs of hands and six faces. Valli and Deivānai are found on the either side of the lord.

The Nellaiappar Temple at Tirunelveli, [another Śiva temple].—Subrahmaṇya is seen standing with Valli to his right. He is shown as a beardless young man. His forehead is marked with vibhudipundra (sacred). He is represented with four hands. The peacock stands behind the god. In Bharatanatyam, Subrahmaṇya is represented in samapāda-sthānaka.

Subrahmaṇya (सुब्रह्मण्य).—Son of Śiva. Reason for birth. A son named Vajrāṅga was born to Kaśyapaprajāpati by his wife Danu and he married a girl called Varāṅgī. Vajrāṅga performed penance to Brahmā so that he might shed his āsuric aspect. When he came out of his penance, Varāṅgī was missing and he wandered about the forest in search of her. Finally he saw Varāṅgī crying under a tree. When he asked her the reason for her weeping, she told him about harassments by Brahmā during the thousand years when Vajrāṅga was immersed in trance. Indra one day threw about the vessels used by her in worship, appearing before her in the guise of a monkey; on another occasion he threatened her in the form of a lion and on a third occasion he came disguised as a snake and bit on her legs. Very much grieved over the story Vajrāṅga again took to penance with the grim determination to punish Indra and when Brahmā appeared before him he prayed for the boon of a son who would surpass the Devas including Indra in prowess. Brahmā granted him the boon. Varāṅgī delivered a son twelve months after the boon. The child was christened Tārakāsura. (See full article at Story of Subrahmaṇya from the Puranic encyclopaedia by Vettam Mani)

1b) One of the 16 Ṛtviks for an yajña; from the knees of Nārāyaṇa.*

[«previous (S) next»] — Subrahmanya in Vastushastra glossary
Source: Shodhganga: Temples of Salem region Up to 1336 AD

1) The first one is the form where he is seated on a peacock. He is twelve handed and holds a variety of weapons and attributes. He is six-headed. A semicircular prabhāvali is provided, which runs all alround, connecting all the hands and kirīṭa. This sculpture is always accompanied by two separate sculptures of Valli and Devasenā.

2) The other form represents this god as standing as a boy having two hands. He is single headed. His left hand is in kaṭihasta gesture, while his right hand holds the daṇḍāyudha. That is why this deity is also called by the name Daṇḍapāṇi.

2) Name of one of the sixteen priests employed at a sacrifice.

(-ṇyaḥ) 1. Kartikeya. 2. Name of one of the sixteen priests employed at a sacrifice. E. su good, and brahmaṇya the Brahmanical order, of whom he is the special guardian.

Subrahmaṇya (सुब्रह्मण्य).—[adjective] very kind to Brahmans. [masculine] a cert. priest, [feminine] ā a cert. recitation performed by this priest, also the priest himself.

2) [noun] one of the sixteen men participating in a religious sacrifice.