Sthiracakra means something in Buddhism, Pali, Hinduism, Sanskrit. If you want to know the exact meaning, history, etymology or English translation of this term then check out the descriptions on this page. Add your comment or reference to a book if you want to contribute to this summary article.

Alternative spellings of this word include Sthirachakra. 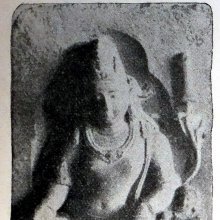 Sthiracakra (स्थिरचक्र) refers to one of the various forms of Mañjuśrī having their Sādhana described in the 5th-century Sādhanamālā (a collection of sādhana texts that contain detailed instructions for rituals).—His Colour is white; his Symbol is the sowrd; his Mudrā is the varada; his Companion is Śakti.

The Sādhana for the worship of Sthiracakra has one remarkable feature which distinguishes it from the other Sādhanas in the Sādhanamālā, namely, that it does not give the Dhyāna at astretch, but the information about his form is scattered through-out the Sādhana, which again, is in verse. From the information gleaned from the Sādhana about his form it appears that in one of his hands he carries the sword, which by radiating light destroys the darkness of ignorance, while the other is engaged in bestowing boons of all kinds, or in other words, displays the Varada pose. His colour is white and he is decked in garments of the colour of the bee; he sits onthe moon, supported by a lotus, and wears the Cīrakas which makes his body resplendent. He wears princely ornaments and displays the sentiment of passionate love. He is accompanied by a Prajñā, who is beautiful, displays the sentiment of passionate love and laughs profusely.

Search found 1 books and stories containing Sthiracakra, Sthira-cakra; (plurals include: Sthiracakras, cakras). You can also click to the full overview containing English textual excerpts. Below are direct links for the most relevant articles: