Soul means something in Buddhism, Pali, Hinduism, Sanskrit, Jainism, Prakrit. If you want to know the exact meaning, history, etymology or English translation of this term then check out the descriptions on this page. Add your comment or reference to a book if you want to contribute to this summary article. 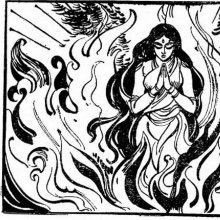 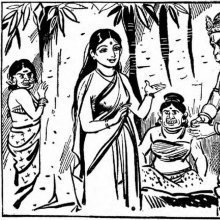 Souls (i.e., ‘the living souls of beings’) are evolved from the original intellect, according to the Yogavasistha 6.118.—Accordingly, “It is by the divine will, that the living souls of beings are evolved from the original intellect, (in which they are contained), as the waves rise from the main body of waters contained in the ocean. These living souls, retain the tendencies of their prior states in former births, and are thereby led to move in their course of light or ignorance etc. in this world, and to accordingly subject either to happiness or misery, which is felt by the mind and never affects the soul itself. The invisible soul is known in the knowable mind, which is actuated by it (the soul); as the invisible node of Rahu, becomes visible to us in the eclipse of the moon (which is affected by it): (so the mind acting under the impulse of the soul, becomes liable to pain or pleasure according to its desert). [...]”

Souls use the rice and plants as their halting station without being identified with it, as it is expressly stated in Sruti to be a passing stage, like the previous stages of ether, air etc. They do not lose their identity. The souls are not born there for the purpose of retributive enjoyment. Where real birth takes place and experience of pleasure and pain commences, the fruits of actions begin, the text refers to the operation of Karma as in “Those whose conduct has been good will quickly attain a good birth”. (cf.  Brahmasutras, section 1 - sutras 292-318)

[«previous (S) next»] — Soul in Shaivism glossary
Source: McGill: A Translation and Analysis of the Civañāṉa Cittiyār–Parapakkam

Souls goes through its karmic experiences, according to Aruṇanti (a 13th century South Indian brahmin ascetic) in his Irupā irupatu (fifth book of the Civañāṉa Cittiyār).—To the question why, in spite of god’s presence, the soul goes through its karmic experiences, Aruṇanti answers that in the presence of god’s grace, the darkness [bondage] resulting from impurities is removed and the freed soul immediately experiences freedom. The karmic process is a requisite part of the soul’s journey in its quest for a divine merger with Śiva.

The soul suffers from a misconception that it is the sole agent, and it alone is responsible for all the events because of its own power. The concept of “mineness” becomes predominant, and the soul forgets its origin and exhibits the lack of gratitude. However, due to his immense love for the souls, which demonstrate devotion (bhakti), god shines his grace in the ego of the souls and bestows the gift of himself on the souls. In this treatise, Aruṇanti elaborates on the divine immanence–how, when the soul eventually realizes its total dependence on god and with loving devotion surrenders to him, it merges with and stands united with god forever.

Souls are not recognized in Buddhism, according to an appendix found in the translation of the 2nd century Mahāprajñāpāramitāśāstra chapter XXXIX.—Accordingly, “Buddhists, it is true, deny the existence of a soul, but, nevertheless, they recognize that the mind at conception (upapatticitta) is the continuation of the mind at death (maraṇacitta). Hence the necessity of properly preparing the dying person for death”.

According to Teaching of Emptiness (śūnyatā), there is no soul (ātman):—“when matter (rūpa) arises, it arises from emptiness (śūnya / śūnyatā) alone; when matter perishes, it perishes into emptiness alone. When the formations (saṃskāra) arise, they arise from emptiness alone; when the formations perish, they perish into emptiness alone. There is no soul (ātman) there, no individual (pudgala), no spirit (jīva). There is no individual who goes from the present existence to the future existence; there is only a nominal and conventional being resulting from a complex of causes and conditions. Worldly people and fools pursue a name in the search for reality”.

Souls exists apart from the body, and exists after death, according to chapter 1.1 [ādīśvara-caritra] of Hemacandra’s 11th century Triṣaṣṭiśalākāpuruṣacaritra (“lives of the 63 illustrious persons”): a Sanskrit epic poem narrating the history and legends of sixty-three important persons in Jainism.

Accordingly, as Svayambuddha refuted Materialism in the presence of king Mahābala (i.e., previous incarnation of Ṛṣabha):—

“People, alas! are made to fall by the atheists who are enemies to themselves and others, dragged like blind men by blind. That the soul exists is known by its own perception, like pleasure and pain. From lack of superior proof, no one can deny it. ‘I am happy; I am unhappy,’ this unrefuted conviction could not arise to any one without a soul. When a soul has thus been proved in one’s own body from one’s own feeling, it is also present in other bodies from inference. It is deduced from the perception of action always accompanied by intelligence that consciousness is present in (one’s own) body and in other bodies”.

Search found 322 books and stories containing Soul; (plurals include: Souls). You can also click to the full overview containing English textual excerpts. Below are direct links for the most relevant articles:

Concept of Mokṣa according to Dvaita Vedānta < [Introduction]

Verse 5.15 - The nature of accommodation of souls in the space < [Chapter 5 - The Non-living Substances]

Verse 2.1 - Distinctive characteristics of the soul (jīva) < [Chapter 2 - Category of the Living] 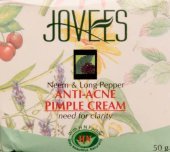