Sindura means something in Hinduism, Sanskrit, Jainism, Prakrit, Buddhism, Pali, the history of ancient India, Marathi. If you want to know the exact meaning, history, etymology or English translation of this term then check out the descriptions on this page. Add your comment or reference to a book if you want to contribute to this summary article. 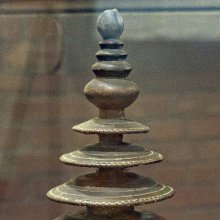 Sindūra (सिन्दूर) refers to either “red lead”, “mercury oxide” or “vermilion” (powdered mineral cinnabar). It is used in Ayurvedic literature such as the Rasaprakāśasudhākara (Sanskrit book on rasaśāstra, or ‘Indian medicinal alchemy’).

Sindūra (सिन्दूर) refers to “vermilion”, according to the Manthānabhairavatantra, a vast sprawling work that belongs to a corpus of Tantric texts concerned with the worship of the goddess Kubjikā.—Accordingly, “[...] (6) The Wheel of the Command is between the eyebrows. It is a fire in the form of a Point. In the middle of it is the seed of power (śaktibīja), red like vermilion [i.e., sindūra-aruṇa-sannibha]. [...] (Perfect) contemplation (samādhi) is with (these) sixteen aspects and is (attained) within the form of the sixfold deposition (ṣoḍhānyāsa). He who knows this is (a veritable) Lord of Yogis, the others (who do not) are (just) quoting from books. Once attained the plane that is Void and Non-void, the yogi is freed from bondage”.

Sindūra (सिन्दूर) refers to “(the hue of) vermillion”, according to the King Vatsarāja’s Pūjāstuti called the Kāmasiddhistuti (also Vāmakeśvarīstuti), guiding one through the worship of the Goddess Nityā.—Accordingly, “[...] Her body is beautiful and bears the hue of vermillion (sindūra-sundaratanu). Its middle part is slim, [and] she is the repository of beauty. She is slightly bent like a young elephant because of her pitcher-like breasts, resembling the temples of a young elephant. Her eyes are moving and wide like those of a deer. She is moon-faced, her smiles are gentle, and she serves as the felicitous banner of the Love-god. [...]”.

Sindūra (सिन्दूर) refers to “vermillion”, according to the Netratantra of Kṣemarāja: a Śaiva text from the 9th century in which Śiva (Bhairava) teaches Pārvatī topics such as metaphysics, cosmology, and soteriology.—Accordingly, [verse 10.7cd-17ab, while describing the worship of Bhairavī and Bhairava]—“[Bhairavī] has the appearance of vermillion or lac (lākṣā-sindūra-saprabhā). [She has] erect hair, a large body and is dreadful and very terrifying. [She has the medicinal plant] śatavārī, is five-faced, and adorned with three eyes. [Her hands bear] curved talons curved [She has] eyes like the hollow of a tree and wears a garland of severed heads. [Ten-]armed, like Bhairava [she also] bears Bhairava’s weapons [of an axe and hatched]. [...]”.

Sindūra (सिन्दूर) refers to “red powder” (applied to the head during the marriage ceremony), according to the Śivapurāṇa 2.3.50 (“Description of fun and frolic”).—Accordingly, as Brahmā narrated to Nārada: “[...] At the behest of the Brahmins, Śiva applied Red powder (sindūra) on the head of Pārvatī. The lustre of Pārvatī at that time was beyond description and very wondrous. Thereafter at the bidding of the Brahmins both sat on the same cushion and attained such a lustre as accentuated joy in the hearts of the devotees. O sage, then they returned to their apartment and, at my behest performed the rite of Saṃsrava Prāśana, of wonderful sportive nature that they were. [...]”.

Note: The printing of red lead on the head of the bride by the bridegroom is the most striking feature of the present day marriage ceremonies, nowhere mentioned in the Gṛhyasūtras. The later Paddhatis, however, refer to this custom. Cf. Gadādhara on P.G.S. 1.8.9.

Sindūra (सिन्दूर).—Red lead (sindūra) was used in ancient paintings and its hue is light, used by western Indian painters. The colour was prepared by roasting white lead in open air till it attained deep colour. The nῑm gum was used as a medium with it.

[«previous (S) next»] — Sindura in India history glossary
Source: What is India: Inscriptions of the Śilāhāras

Sindūra (सिन्दूर) is the name of a member of the mahāparṣad (assembly) mentioned in the “Ciñcaṇī plate of the reign of Cittarāja”. Accordingly, “Now, while the Mahāmaṇḍaleśvara, the illustrious Cāmuṇḍarāja, who, by his religious merit, has obtained the right to the five mahāśabdas... is governing Saṃyāna, he addresses all persons, whether connected with himself or others (such as Sindūra)...”.

This plate (mentioning Sindūra) was found together with eight others at Chincaṇī in the Ḍahāṇu tāluka of the Ṭhāṇā District, North Koṅkaṇ, in 1955. The object of the inscription is to record the grant, by Cāmuṇḍarāja, of a ghāṇaka (oil-mill) in favour of the temple Kautuka-maṭhikā of the goddess Bhagavatī at Saṃyāna. The gift was made by pouring out water on the hand of the Svādhyāyika (scholar) Vīhaḍa, on the fifteenth tithi of the dark fortnight (i.e. amāvāsyā) of Bhādrapada in the śaka year 956.

Sindūra.—(IA 19), corruption of sindhura, an elephant. Note: sindūra is defined in the “Indian epigraphical glossary” as it can be found on ancient inscriptions commonly written in Sanskrit, Prakrit or Dravidian languages.

2.6. Pharmaceutical use of Lipstick < [Chapter 1 - Cosmetics]