Simhini means something in Hinduism, Sanskrit. If you want to know the exact meaning, history, etymology or English translation of this term then check out the descriptions on this page. Add your comment or reference to a book if you want to contribute to this summary article. 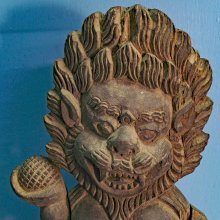 Siṃhinī (सिंहिनी) refers to one of the twenty-seven mātrāvṛttas (quantitative verse) dealt with in the second chapter of the Vṛttamuktāvalī, ascribed to Durgādatta (19th century), author of eight Sanskrit work and patronised by Hindupati: an ancient king of the Bundela tribe (presently Bundelkhand of Uttar Pradesh). A Mātrāvṛtta (eg., siṃhinī) refers to a type of metre found in classical Sanskrit poetry.