Shurangama means something in Buddhism, Pali. If you want to know the exact meaning, history, etymology or English translation of this term then check out the descriptions on this page. Add your comment or reference to a book if you want to contribute to this summary article.

The Sanskrit term Śūraṅgama can be transliterated into English as Surangama or Shurangama, using the IAST transliteration scheme (?). 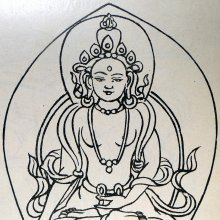 Suraṅgama (सुरङ्गम) is the name of a Bodhisattva commonly depicted in Buddhist Iconography, and mentioned in the 11th-century Niṣpannayogāvalī of Mahāpaṇḍita Abhayākara.—his color is white; his symbol is the sword.

“Suraṅgama is white in colour. He holds the sword in the right hand, while the clenched left is placed on the hip”.

Śūraṅgama (शूरङ्गम, “heroic march”) refers to one of the “four concentrations” (samādhi) as defined in the Dharma-saṃgraha (section 136). The Dharma-samgraha (Dharmasangraha) is an extensive glossary of Buddhist technical terms in Sanskrit (e.g., śūraṅgama). The work is attributed to Nagarjuna who lived around the 2nd century A.D.

The Sutra of the Past Vows of Earth Store Bodhisattva

Chapter VIII - Praises of Lord Yama and His Followers