Shrikrishna means something in Hinduism, Sanskrit, Jainism, Prakrit. If you want to know the exact meaning, history, etymology or English translation of this term then check out the descriptions on this page. Add your comment or reference to a book if you want to contribute to this summary article.

The Sanskrit term Śrīkṛṣṇa can be transliterated into English as Srikrsna or Shrikrishna, using the IAST transliteration scheme (?). 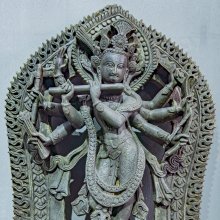 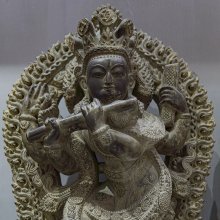 [«previous (S) next»] — Shrikrishna in Shaktism glossary
Source: academia.edu: The Śāradātilakatantra on Yoga

Śrīkṛṣṇa (श्रीकृष्ण) is grandson of Mahābala and father of Lakṣmaṇadeśikendra (or Lakṣmaṇadeśika, Lakṣmaṇācārya) according to the 11th-century Śaradātilaka verse 25.85-86.—“(85) His son was Śrīkṛṣṇa, a teacher of teachers [and a man] of elevated power, by bathing in the nectar of compassion of whose feet those who are [so] blessed enjoy supreme prosperity. (86) Of that lord, who possessed an ācārya’s wealth of knowledge, Lakṣmaṇadeśikendra [was] the son, who obtained great fame in all [branches of] knowledge (vidyā) and all [performing] arts (kalā)”.

Śrīkṛṣṇa (श्रीकृष्ण) or Śrīkṛṣṇakathā refers to one of the 157 stories embedded in the Kathāmahodadhi by Somacandra (narrating stories from Jain literature, based on the Karpūraprakara), which is included in the collection of manuscripts at the ‘Vincenzo Joppi’ library, collected by Luigi Pio Tessitori during his visit to Rajasthan between 1914 and 1919.—The Kathāmahodadhi represents a repository of 157 stories [e.g., Śrīkṛṣṇa-kathā] written in prose Sanskrit, although each of them is preceded by a verse. Together, they stage a large number of Jain characters (including early teachers). [...]

Śrīkṛṣṇa has the following synonyms: Kṛṣṇa.

Chapter 68 - Glory of the Holy Shrine of Puruṣottama

Chapter 52 - The Review of the Prayer to the Lord