Shivalinga means something in Hinduism, Sanskrit, Marathi. If you want to know the exact meaning, history, etymology or English translation of this term then check out the descriptions on this page. Add your comment or reference to a book if you want to contribute to this summary article.

The Sanskrit term Śivaliṅga can be transliterated into English as Sivalinga or Shivalinga, using the IAST transliteration scheme (?). 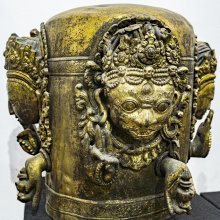 1) Śiva worshipped in the form of a Phallus.

2) a temple dedicated to the worship of the Liṅga.

(-ṅgaṃ) Siva in the form of a phallus.