Shilajatu means something in Hinduism, Sanskrit, biology. If you want to know the exact meaning, history, etymology or English translation of this term then check out the descriptions on this page. Add your comment or reference to a book if you want to contribute to this summary article.

The Sanskrit term Śilājatu can be transliterated into English as Silajatu or Shilajatu, using the IAST transliteration scheme (?).

Śilājatu (Mineral pitch/asphalt/bituman):—According to other texts the Śilājatu is mainly of two types such as:—

The first variety is again subdivided in two varieties such as Sasatva and Satvahīna; of the two the first one is better in properties and is capable of destroying all the doṣas.

Origin: In summer season due to intense heat a few rocks of Himalaya mountain containing either gold, silver or copper may start oozing an exudates from some rocks. That is known as Śilājatu and claimed to contain respective metals in it. (It has the following sub-varieties:)

If it is put on fire, it takes the shape of liṅga (penis); It burns without producing smoke; It should dissolve in water. Only such Śilājatu is considered as real or pure Śilājatu.

The man who always uses purified Śilājatu lives for hundred years ingood health and never suffers with any disease and these persons are never get affected with mūtrakṛccha and aśmarī etc. urinary disorders. Whatever properties have been found by the wise persons in Mahārasas, Uparasas, Dhātus, Ratnas and in Pārada or its compounds all those propertiesare claimed to be present in Śilājatu (Śilādhatu) also.

Śilājatu is a thick, sticky tar like substance with a colour ranging from white to dark brown (later is more common). Śilājatu is blackish-brown exudation of variable consistency, obtained from steep rocks of different formations found in the Himalayas. The word ‘Śilājatu’ comprises of two terms, one ‘śilā’ and other ‘jatu’. The word Śilā denotes rock, which is considered as one of the most important source. Term Jatu denotes a blackish brown substance, which is similar to ‘lākṣā’. Thus ‘Śilājatu’ is the exudates of rocks having blackish brown colour and oozes out from steep rocks of mountain during summers because of intense sun heat.

On the basis of colour and smell Śilājatu is of two types:

Origin: Mythologically, according to Cakradutta, Bṛhat-rasarājsundara and Rasendra-purāṇa, Śilājatu is supposed to have originated from the Mandrācala Parvata as Sveda while churning of the ocean. Further it is said that Śilājatu is distributed in the hilly areas and comes out of rocks on being exposed by intense sun heat. According to Caraka-saṃhitā, Suśruta-saṃhitā, Rasa-ratna-samuccaya and other important texts, during summer due to intense heat, Śilājatu exudates from the lower part of the Himalayan mountains.

Shilajatu in India is the name of a plant defined with Swertia decussata in various botanical sources. This page contains potential references in Ayurveda, modern medicine, and other folk traditions or local practices.

If you are looking for specific details regarding Shilajatu, for example pregnancy safety, diet and recipes, health benefits, chemical composition, side effects, extract dosage, have a look at these references.

(-tuḥ) 1. Bitumen. 2. Red chalk. E. śilā a stone, and jatu lac; it is supposed to ooze from the stones of mountains in the hot weather.

1) [noun] any of several hard or semisolid materials obtained as a tarlike residue in the distillation of petroleum, coal tar, wood tar, etc.; bitumen.

Chapter XVI - The medical treatment of Abscesses and Tumours

Chapter 21 - Symptoms and Treatment of Murcha (loss of consciousness) 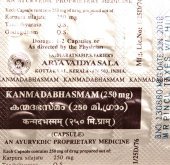 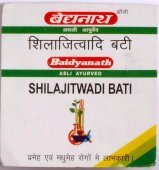