Sheshashayi means something in Hinduism, Sanskrit. If you want to know the exact meaning, history, etymology or English translation of this term then check out the descriptions on this page. Add your comment or reference to a book if you want to contribute to this summary article.

The Sanskrit term Śeṣaśāyi can be transliterated into English as Sesasayi or Sheshashayi, using the IAST transliteration scheme (?). 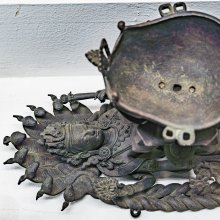 [«previous (S) next»] — Sheshashayi in Vastushastra glossary
Source: Shodhganga: Temples of Salem region Up to 1336 AD

Śeṣaśāyi (शेषशायि).—The Śeṣaśāyi rock-cut shrine has been built in an elevated place and has a flight of steps leading to the shrine. In between the hastihastas of the sopānas, there is a figure of a squatting yakṣa, which is locally referred to as ‘Viśvakarmā’. Originally, the rock-cut shrine had an open porch with four pillars in a row. A modern wall has been built between the pillars. This porch is about four feet wide and is narrow. The porch leads to an elevated platform which is about three feet high. The platform possesses a pādabandha-adhiṣṭhāna.

Āyudhas are represented in human forms. Reliefs of sages and celestials have been carved around the Śeṣaśāyi sculpture. Two huge sculptures of the demons, Madhu and Kaiṭabha are carved near the feet of main deity. On either sides of the wall the sculptures of Sūrya and Candra are carved. This sculpture belong to the uttamaśayanamūrti class.

On the two walls of the porch, the sculptures of Harihara and Trivikrama are carved. In the Trivikrama panel, Trivikrama stands on his left leg and the right leg is raised towards the heavens. The Harihara sculpture is standing in samabhanga. The right half, which depicts ‘Hara’, holds two Serpents in both the hands. The left half depicting Viṣṇu holds a conch in the upper hand and the lower hand is in kaṭihastamudra.