Shambhava means something in Buddhism, Pali, Hinduism, Sanskrit, Jainism, Prakrit, Marathi, Hindi, biology. If you want to know the exact meaning, history, etymology or English translation of this term then check out the descriptions on this page. Add your comment or reference to a book if you want to contribute to this summary article.

The Sanskrit term Śāmbhava can be transliterated into English as Sambhava or Shambhava, using the IAST transliteration scheme (?).

Alternative spellings of this word include Sambhav. 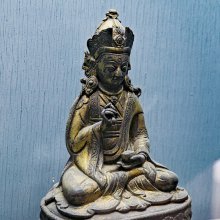 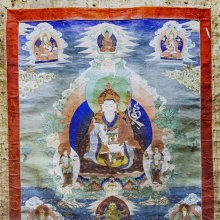 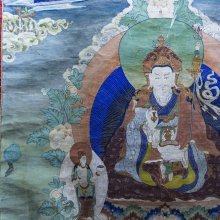 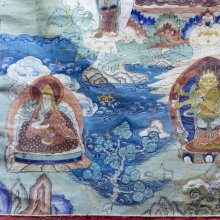 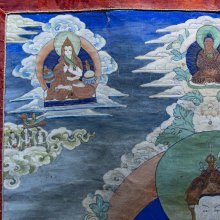 Sambhavā (सम्भवा):—One of the twelve guṇas associated with Piṇḍa, the seventh seat of the Svādhiṣṭhāna-chakra. According to tantric sources such as the Śrīmatottara-tantra and the Gorakṣasaṃhitā (Kādiprakaraṇa), these twelve guṇas are represented as female deities. According to the Ṣaṭsāhasrasaṃhitā however, they are explained as particular syllables. They (e.g. Sambhavā) only seem to play an minor role with regard to the interpretation of the Devīcakra (first of five chakras, as taught in the Kubjikāmata-tantra).

Śāmbhava (शाम्भव) refers to a category of dhāraṇās according to the Śaivāgamas. The term dhāraṇā refers to a particular way “concentrating the mind”, and can be seen as a means of attaining the ultimate truth.

Śāmbhava (शाम्भव) is the name of an Āgama or Tantra mentioned in the Kakṣapuṭatantra  verse 1.5-7.—“At a previous time, when Pārvatī asked him, Śaṅkara told of the attainments of vidyā in the wide worldly life, in various ways. I observed each teaching taught also by the troops of Gods, Siddhas (those who have attained supernatural power), Munis (saints), Deśikas (spiritual teachers), and Sādhakas (tantric practicioners). They are [, for example]: Śāmbhava... I shall carefully extract all the above-mentioned āgamas, which are transmitted from mouth to mouth, like butter extracted from coagulated milk”.

Śāmbhava (शाम्भव) is another name for Devadāru, which is a Sanskrit word referring to Cedrus deodara (Himalayan cedar), from the Pinaceae family. It is classified as a medicinal plant in the system of Āyurveda (science of Indian medicine) and is used throughout literature such as the Suśrutasaṃhita and the Carakasaṃhitā. The synonym was identified in the Rājanighaṇṭu (verses 12.28), which is a 13th century medicinal thesaurus.

2) [sambhavaḥ] Source: Something from which another thing originates

1b) At the end of samhāra; impossible to be told in detail; also nisarga.*

1) Śāmbhava (शाम्भव) refers to “the highest form of the state attained by those who have taken Kaula initiation”, according to the Niruttaratantra (quoted by Woodroffe 1973: 241).—The lowest condition is the basic state of the fettered soul—paśu—that is accordingly called paśubhāva. In this state one should follow the basic rules and norms enjoined by the common, exoteric scriptures that derive their authority from the Vedas and the smṛtis. [...] The next state [i.e., bhāva] is attained by those who have taken Kaula initiation, the highest form of which is called Śāmbhava, reminding us of the form of initiation taught in the Kubjikā Tantras that preceded these schools. [...]

2) Śāmbhava (शाम्भव) or Śāmbhavājñā refers to the Command (ājñā) associated with Oḍḍiyāna, one of the eight Sacred Seats (pīṭha), according to the Yogakhaṇḍa (chapter 14) of the Manthānabhairavatantra, a vast sprawling work that belongs to a corpus of Tantric texts concerned with the worship of the goddess Kubjikā.

4. Sambhava. A Pacceka Buddha of thirty one kappas ago. Sappaka Thera, in a previous birth, was a Naga and held a lotus over him. ThagA.i.399.

5. Sambhava. The Bodhisatta, born as the son of Vidhura and brother of Sanjaya and Bhadrakara. See the Sambhava Jataka.

Sambhava (सम्भव):—The third Tīrthaṅkara (Janism recognizes 24 such teachers or Siddhas). His name can also be spelled as Saṃbhava (संभव) and he is also known as Sambhavanātha (or Saṃbhavanātha). His colour is gold (kāñcana), according to Aparājitapṛcchā (221.5-7). His height is 400 dhanuṣa (a single dhanuṣa (or, ‘bow’) equals 6 ft), thus, roughly corresponding to 732 meters. His emblem, or symbol, is an Horse.

Sambhava’s father is Jitari and his mother is Senā according to Śvetāmbara but Suṣeṇā according to Digambara. It is an ancient Jain practice to worship the Tīrthaṅkara’s parents in various rites, such as the pratiṣṭhāvidhi, according to the Ācāradinakara (14th century work on Jain conduct written by Vardhamāna Sūri).

Sambhava (सम्भव) (also Śambhava) refers to the third of the twenty-four Tīrthaṅkaras praised in the first book (ādīśvara-caritra) [chapter 1] of Hemacandra’s 11th century Triṣaṣṭiśalākāpuruṣacaritra (“lives of the 63 illustrious persons”): a Sanskrit epic poem narrating the history and legends of sixty-three important persons in Jainism.

Accordingly, “[...] we worship the Arhats, who at all times and all places purify the people of the three worlds by their name, representation, substance, and actual existence. [...] May the words of the Lord of the World, Holy Sambhava, prevail at the time of his preaching—words that resemble rivers in the garden of all the souls who can attain emancipation”.

Sambhava is the son of Jitāri and Senā (Senādevī), according to chapter 3.1, “At daybreak King Jitāri held a great birth-festival in honor of the Arhat deserving the world, who had become his son. In every house, on every road, in every market, in the whole city a festival took place just as in the palace. While he was in embryo, rice was grown (sambhūta); and at that time the second ploughing (śambā) took place; so his father gave the name ‘Sambhava’ and also ‘Śambhava’ to the Lord”.

Saṃbhava (संभव) refers to “birth”, according to the 11th century Jñānārṇava, a treatise on Jain Yoga in roughly 2200 Sanskrit verses composed by Śubhacandra.—Accordingly, “For this embodied soul there is not another companion in union and in separation, in birth (saṃbhava) or in death and at the time of pleasure and pain. This [one] performs action for wealth, a son, a wife, etc. [and] he experiences alone that which is the result of that [action] in the levels of the Śvabhra [hell], etc.”.

-vaḥ A worshipper of Śiva.

1) Equivalence (one of the Pramāṇas).

Saṃbhava (संभव).—(saṃbhava) [masculine] being together, union, cohabitation; finding room or being contained in ([locative]); birth, origin, source; cause, motive; happening, rising, appearance; being, existence, possibility. Often adj. originating in, sprung from, caused by, appearing in or at (—°).

2) [v.s. ...] m. (with Jainas) Name of the third Arhat of the present Avasarpiṇī, [cf. Lexicographers, esp. such as amarasiṃha, halāyudha, hemacandra, etc.]

5) m. (only [cf. Lexicographers, esp. such as amarasiṃha, halāyudha, hemacandra, etc.]) a worshipper of Śiva

21) [v.s. ...] (in [philosophy]) equivalence (regarded as one of the Pramāṇas q.v.; illustrated by the equivalence between one shilling and pence), [Monier-Williams’ Sanskrit-English Dictionary]

1) Saṃbhava (संभव) in the Prakrit language is related to the Sanskrit word: Saṃbhū.

2) [noun] a volatile, crystalline ketone, C10H16O, with a strong characteristic odor, derived from the wood of the camphor tree or synthetically from pinene; camphor.

4) [noun] the resin of the tree Ailanthus malabarica, used as incense.

5) [noun] oneness of a devotee with Śiva, a yogic accomplishment.

1) [noun] the act of coming into existence; birth.

2) [noun] that which brings about an effect or result; a cause.

3) [noun] the quality or condition of being possible; possibility.

5) [noun] something made by mixing two or more substances together; a mixture.

6) [noun] the quality or fact of being equal; equality.

7) [noun] (phil.) the quality or state of being probable; likelihood, considered as a proof; probability.