Shaligrama means something in Hinduism, Sanskrit, Jainism, Prakrit, Marathi. If you want to know the exact meaning, history, etymology or English translation of this term then check out the descriptions on this page. Add your comment or reference to a book if you want to contribute to this summary article.

The Sanskrit term Śāligrāma can be transliterated into English as Saligrama or Shaligrama, using the IAST transliteration scheme (?). 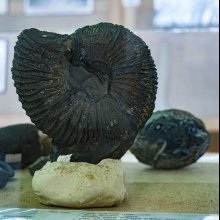 Śāligrāma (शालिग्राम) refers to a type of stone used for the worship of Viṣṇu, according to the Skandapurāṇa 6.1.243.—Accordingly, “[...] Enjoyment of pleasures (and salvation) cannot be far from those men who always worship Viṣṇu in Śāligrāma, the Lord marked by his discus (or Śāligrāma which is marked by discus). Whatever auspicious rite is performed (especially during Cāturmāsya) with the mind dwelling on Śāligrāma, shall be everlasting in its benefit. Salvation is not inaccessible to a man who has acquired association with both, viz. a Śāligrāma stone and a Dvārāvatī stone. [...]”.

There are twenty-four types of Śāligrāma stones mentioned in the succeeding chapter:

Sāligrāma (सालिग्राम) is the name of an ancient village, according to chapter 2.3 [ajitanātha-caritra] of Hemacandra’s 11th century Triṣaṣṭiśalākāpuruṣacaritra (“lives of the 63 illustrious persons”): a Sanskrit epic poem narrating the history and legends of sixty-three important persons in Jainism.

Accordingly, as Ajita narrated:—“[...] Not very far from this city is a large village granted to Brahmans, named Sāligrāma. There lived the head of the Brāhmans, named Dāmodara, and his wife Somā. They had a son Śuddhabhaṭṭa who married Sulakṣaṇā, the daughter of Siddhabhaṭṭa. Sulakṣaṇā and Śuddhabhaṭṭa grew up and enjoyed pleasures suitable to their position, as they liked. In course of time their parents died, and their fathers’ money also disappeared. Sometimes he would lie down at night, hungry in the midst of plenty”.

śāligrāma (शालिग्राम).—m (śāla S River, and grāvā S Stone.) A black stone found in the river gaṇḍakī and worshiped as sacred to Vishn̤u. 2 fig. (Because it resembles this stone in shape.) A jocose name for the onion.

Part 11: Origin of Dhūmaketu’s enmity < [Chapter VI - Marriage of Kṛṣṇa with Rukmiṇī and others]