Shaiva means something in Hinduism, Sanskrit, Marathi, Jainism, Prakrit, Hindi. If you want to know the exact meaning, history, etymology or English translation of this term then check out the descriptions on this page. Add your comment or reference to a book if you want to contribute to this summary article.

The Sanskrit terms Śaiva and Śaivā can be transliterated into English as Saiva or Shaiva, using the IAST transliteration scheme (?).

Alternative spellings of this word include Shaiv. 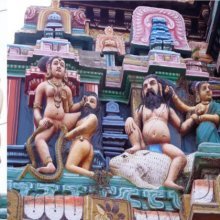 1d) In the Sīmantasīma of the personified Veda.*

Śaiva (शैव) is the name of an Āgama or Tantra mentioned in the Kakṣapuṭatantra  verse 1.5-7.—“At a previous time, when Pārvatī asked him, Śaṅkara told of the attainments of vidyā in the wide worldly life, in various ways. I observed each teaching taught also by the troops of Gods, Siddhas (those who have attained supernatural power), Munis (saints), Deśikas (spiritual teachers), and Sādhakas (tantric practicioners). They are [, for example]: Śaiva... I shall carefully extract all the above-mentioned āgamas, which are transmitted from mouth to mouth, like butter extracted from coagulated milk”.

Thus based on varṇa, the above seven-fold division is described in various āgamas.

Based on ācāra, a four-fold categorization is described:

Śaiva (शैव) represents an undesirable Ācārya, according to the 9th-century Hayaśīrṣa-pañcarātra Ādikāṇḍa chapter 3.—The Lord said:—“I will tell you about the Sthāpakas endowed with perverse qualities. He should not construct a temple with those who are avoided in this Tantra. [...] He with whom one constructs a temple should not be a Śaiva, or a Saura, nor a Naiṣṭhika, nor a naked one, nor born of mixed marriage, nor unclean, old, or one who is of a despicable form or marked by great sin. [...] A god enshrined by any of these named above (viz., śaiva), is in no manner a giver of fruit. If a building for Viṣṇu is made anywhere by these excluded types (viz., śaiva) then that temple will not give rise to enjoyment and liberation and will yield no reward, of this there is no doubt”.

Śaiva (शैव) refers to one of the spiritual disciplines (darśana—systems) issued from the limbs of the body of the Goddess, according to the Manthānabhairavatantra, a vast sprawling work that belongs to a corpus of Tantric texts concerned with the worship of the goddess Kubjikā.—[...] All spiritual disciplines, whatever the tradition, are necessarily grounded in the same energy of the Śāmbhava state. They issue, as the texts put it, from the limbs of the body of the goddess who is this energy. These range from the lowest extremity—the left big toe—where Buddhism originates, to the highest—the End of Sixteen—where the Śāmbhava state is attained which is the source of the Kubjikā tradition. The systems (darśana) and their corresponding places of origin in the Goddess’s body are as follows: [6) Śaiva—the throat—kaṇṭhadeśa, ...].

Śaivā (शैवा) is the name of a Mātṛkā-Śakti created by Mahārudra in order to control the plague of demons created by Andhakāsura.—Accordingly, Andhaka-Asura tried to kidnap Umā (Devī Pārvatī), and was fiercely attacked by Mahārudra who shot arrows at him from his mahāpināka. when the arrows pierced the body of Andhakāsura, drops of blood fell to earth and from those drops, thousands of Andhakas arose. To control this plague of demons, Mahārudra created Mātṛkā-Śaktis [viz., Śaivā] and ordered them to drink the blood of the demons and drain them dry.

Śaivā (शैवा) refers to one of the various Mātṛkā-Śaktis created by Rudra in order to destroy the clones that spawned from Andhaka’s body.—Accordingly, [...] Andhakāsura attempted to abduct Girājanandinī (Pārvatī) and thus ensued a fierce battle between Andhakāsura and the great Rudra, the Lord of Umā. Like raktabīja, every drop of blood that fell from the body of Andhaka created another Asura like him and in no time, the entire world was filled with Andhakas. To destroy the growing number of Andhakas, Rudra created innumerable Mātṛkā-Śaktis [viz., Śaivā]. These Śaktis of immense power at once began to drink every drop of blood that flowed from the body of Andhaka, but they could still not effectively contain the emergence of more and more demons.

Śaiva (शैव) is another name for Vasuka, an unidentified medicinal plant, possibly identified with either Premna barbata Wall. or Calotropis gigantia, according to verse 5.123-124 of the 13th-century Raj Nighantu or Rājanighaṇṭu. The fifth chapter (parpaṭādi-varga) of this book enumerates sixty varieties of smaller plants (kṣudra-kṣupa). Together with the names Śaiva and Vasuka, there are a total of eight Sanskrit synonyms identified for this plant.

śaiva (शैव).—a (S) That worships Shiva as the Supreme deity. 2 Relating to Shiva.

-vaḥ 1 Name of one of the three principal Hindu sects.

2) A member of the Śaiva sect.

-vam Name of one of the eighteen Purāṇas, of a Śāstra or Tantra.

(-vaḥ-vī-vaṃ) Relating or appertaining to the god Siva. m.

3) ‘a worshipper or follower of Śiva’, Name of one of the three great divisions of modern Hindūism (the other two being the Vaiṣṇavas and Śāktas, qq.vv.; the Śaivas identify Śiva-rather than Brahmā and Viṣṇu-with the Supreme Being and are exclusively devoted to his worship, regarding him as the source and essence of the universe as well as its disintegrator and destroyer; the temples dedicated to him in his reproducing and vivifying character [as denoted by the Liṅga q.v.] are scattered all over India; the various sects of Śaivas are described in [Religious Thought and Life in India 86 etc.])

4) a particular religious rite in honour of Durgā (consisting of devout meditation and prostration of the body), [Monier-Williams’ Sanskrit-English Dictionary]

Saiva (सैव) in the Prakrit language is related to the Sanskrit word: Saciva.

1) [adjective] of or relating to Śiva.

2) [adjective] of or relating to Śaiva philosophy, religion, etc.

1) [noun] an āgama that upholds the supremacy of Śiva.

2) [noun] any of several religions or cults of a religion, that worship of and, uphold the supremacy of, Śiva.

3) [noun] a follower of any of these religions or cults.

4) [noun] (dance.) a partricular standing posture in which the left foot is kept in natural position and the toes of the right are bent forward and placed on the floor while the heal is raised up.

2) [adjective] of or relating to Śaiva philosophy, religion, etc.

Saiva (ಸೈವ):—[noun] (correctly, ಶೈವ [shaiva]) a follower of any of Śiva religions or cults.

Bhaavas in Vaishnavism and Saivism: A Comparative Study < [October – December, 1981]

Part 4.1 - Nature and divisions of Vākya (literary speech) < [Chapter 5 - Analyasis and Interpretations of the Kāvyamīmāṃsā]

Part 7.11 - Poetic conventions regarding to the Colours < [Chapter 5 - Analyasis and Interpretations of the Kāvyamīmāṃsā]