Satavahana means something in Buddhism, Pali, Hinduism, Sanskrit, Jainism, Prakrit, the history of ancient India. If you want to know the exact meaning, history, etymology or English translation of this term then check out the descriptions on this page. Add your comment or reference to a book if you want to contribute to this summary article.

The Sanskrit term Śātavāhana can be transliterated into English as Satavahana or Shatavahana, using the IAST transliteration scheme (?). 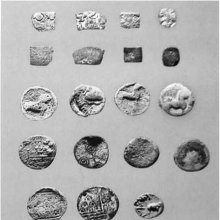 Sātavāhana (सातवाहन) is the name of a king under whom Guṇāḍhya served, according to the Kathāsaritsāgara chapter 6. Guṇāḍhya was the incarnation of Mālyavān, friend of Puṣpadanta, who is a subordinate of Śiva. They were both cursed by Pārvatī to become mortals after Puṣpadanta overheard Śiva narrating the adventures of the seven Vidyādharas.

The Kathāsaritsāgara (‘ocean of streams of story’), mentioning Sātavāhana, is a famous Sanskrit epic story revolving around prince Naravāhanadatta and his quest to become the emperor of the vidyādharas (celestial beings). The work is said to have been an adaptation of Guṇāḍhya’s Bṛhatkathā consisting of 100,000 verses, which in turn is part of a larger work containing 700,000 verses.

Sātavāhana (सातवाहन) is the name of an important person (viz., an Ācārya or Kavi) mentioned in Rājaśekhara’s 10th-century Kāvyamīmāṃsā.—A king of Kuntala and famous poet of Sanskrit literature. He is known by the name Hāla, the author of Gāthāsaptasatī.

Sātavāhana (सातवाहन).—According to scholars such as Moriz Winternitz and K. R. Subramanian, Shalivahana is same as Satavahana, and was a generic family name or title of the Satavahana kings. According to D. C. Sircar, the legendary "Shalivahana" was based on the exploits of multiple Satavahana kings; the legendary Vikramaditya was also based on multiple kings, and the distinction between these individual kings was lost over time.

A king. It is said that, (DA.i.303; is this Satavahana the king of the Kathasaritsagara i.32?) when Anathapindikas family fell into poverty, owing to the alms given by him, a girl of the family, wishing to give alms, went to Satavahanas kingdom, swept a threshing floor and gave alms with the money so obtained. A monk told this to the king, who sent for the girl and made her his chief queen. v.l. Setavahana.

Sātavāhana (सातवाहन).—One day the widowed sister of two Brahmins went to the Godāvarī to fetch water, when nāgarāja captivated by her beauty forcibly outraged her modesty in the form of a human being. She became pregnant and gave birth to a child who was known as Sātavāhana who defeated Vikramāditya of Ujjayinī and made himself the king of Pratiṣṭhānapura. Sātavāhana conquered many territories between the Deccan and the river Tāpti. He embraced Jainism, built a large number of caityas, and established the image of Mahālakṣmī on the bank of the Godāvarī.

[«previous (S) next»] — Satavahana in India history glossary
Source: Shodhganga: The significance of the mūla-beras (history)

Satavahana Dynasty:—The Sungas (187-75 BC) and Satavahanas succeeded the Mauryas in the North and the South respectively in about 200 BC The Satavahanas who ruled in the Deccan and the South had a long reign of about 400 years (circa 200 BC to AD 200). The fine workmanship of the carvers reveals the high standard of efficiency of these craftsmen. The metal images found at Buddham, Amaravati, Kolhapur show the high watermark of metal work in the Satavahana period. The Ikshvakus succeeded the Satavahanas towards the end of the 2nd century AD and they were great patrons of art. The metal work of their period was equally good as their stone carving.

(-naḥ) The sovereign Salivahana. E. sāta a Gandh'arba, changed according to the legend to a lion, on which this prince was discovered riding when a child, and vāhana a vehicle.

2) Sātavāhana (सातवाहन):—m. Name of a king (fabled to have been discovered, when a child, riding on a Gandharva called Sāta, who, [according to] to one legend, was changed into a lion; also = śāli-vāhana q.v.), [Harṣacarita; Kathāsaritsāgara; Rājataraṅgiṇī]