Sarama means something in Hinduism, Sanskrit, Marathi, Hindi. If you want to know the exact meaning, history, etymology or English translation of this term then check out the descriptions on this page. Add your comment or reference to a book if you want to contribute to this summary article.

Alternative spellings of this word include Sharam. 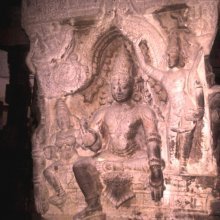 1) Saramā (सरमा).—General. Bitch of the Devas. Śyāma and Śabala, sons of Saramā, were two prominent messengers of Yama and they possessed four eyes each. The offsprings of these dogs are called Sārameyas. The Ṛgveda and Mahābhārata contain a story about Saramā cursing Janamejaya. (For details see under Śrutaśravas III). Other information.

(ii) Saramā is a graha (Evil spirit) of Subrahmaṇya which enters the womb of pregnant women and steals the babies. (Vana Parva, Chapter 230, Verse 34).

(iii) Saramā after having once drunk milk from dasyus lied about it to Indra, and he punished her. (Varāha Purāṇa).

(iv) Indra once deputed Saramā to find out the place where the Paṇis had hidden the cows on condition that he would feed her children. Saramā found out the place and informed Indra about it thus earning for her children their livelihood. (Ṛgveda, Maṇḍala 1, Chapter 5). (See full article at Story of Saramā from the Puranic encyclopaedia by Vettam Mani)

3) Saramā (सरमा).—Daughter of Dakṣaprajāpati by his wife Asiknī. She was married by Kaśyapa maharṣi and from her were born the ferocious animals on earth. (Bhāgavata, Skandha 6).

1a) Saramā (सरमा).—(Sārama); the messenger of Indra, of whom the Dānavas were afraid.*

1b) One of Kaśyapa's wives. Her offspring were beasts of prey.*

Saramā (सरमा) is the name of a Mātṛkā-Śakti created by Mahārudra in order to control the plague of demons created by Andhakāsura.—Accordingly, Andhaka-Asura tried to kidnap Umā (Devī Pārvatī), and was fiercely attacked by Mahārudra who shot arrows at him from his mahāpināka. when the arrows pierced the body of Andhakāsura, drops of blood fell to earth and from those drops, thousands of Andhakas arose. To control this plague of demons, Mahārudra created Mātṛkā-Śaktis [viz., Saramā] and ordered them to drink the blood of the demons and drain them dry.

Saramā (सरमा) refers to one of the various Mātṛkā-Śaktis created by Rudra in order to destroy the clones that spawned from Andhaka’s body.—Accordingly, [...] Andhakāsura attempted to abduct Girājanandinī (Pārvatī) and thus ensued a fierce battle between Andhakāsura and the great Rudra, the Lord of Umā. Like raktabīja, every drop of blood that fell from the body of Andhaka created another Asura like him and in no time, the entire world was filled with Andhakas. To destroy the growing number of Andhakas, Rudra created innumerable Mātṛkā-Śaktis [viz., Saramā]. These Śaktis of immense power at once began to drink every drop of blood that flowed from the body of Andhaka, but they could still not effectively contain the emergence of more and more demons.

Saramā (सरमा) is the chief pet she-dog (celestial dog species and not the mortal one) of Lord Indra (vide M.B. Ādi-parva, 3.1-11). This Saramā had power to curse the three younger brothers of King Janamejaya, the son of Parīkṣit.

3) Name of a daughter of Dakṣa.

4) Name of the wife of Bibhīṣaṇa, brother of Rāvaṇa.

Saramā (सरमा).—[feminine] the bitch of Indra or of the gods.

1) Saramā (सरमा):—[from sara] a f. ‘the fleet one’, Name of a female dog belonging to Indra and the gods (represented in [Ṛg-veda x, 14, 10] as the mother of the four-eyed brindled dogs of Yama cf. [Indian Wisdom, by Sir M. Monier-Williams 470], and called in [Mahābhārata i, 671] deva-śunī; in the [Ṛg-veda] said to have gone in search of and recovered the cows stolen by the Paṇis; elsewhere regarded as the mother of beasts of prey Saramā Deva-śunī is also said to be the authoress of part of [Ṛg-veda x, 108]), [Ṛg-veda; Pāraskara-gṛhya-sūtra; Mahābhārata] etc.

Śarama (शरम) in the Sanskrit language is related to the Prakrit word: Saraha.

2) [noun] a training in using weapons.

Chapter 61 - Holy Centres Yamatīrtha and others

Chapter 2.5 - The origin of the flora and fauna in the Puranas