Sankata means something in Hinduism, Sanskrit, Jainism, Prakrit, Marathi, Hindi. If you want to know the exact meaning, history, etymology or English translation of this term then check out the descriptions on this page. Add your comment or reference to a book if you want to contribute to this summary article.

Alternative spellings of this word include Sankat. 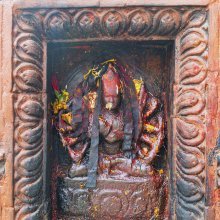 Saṅkaṭa (सङ्कट) refers to a “dilemma”, according to the Śivapurāṇa 2.3.14 (“The Birth of Tāraka and Vajrāṅga”).—Accordingly, after Vajrāṅga spoke to Varāṅgī: “O sage, thus Vajrāṅga whirled a lot in a dilemma [i.e., saṅkaṭa]. Intelligently he considered the corresponding strength and weakness of both the alternatives. O sage, as willed by Śiva, though intelligent the king of demons agreed to the proposal. He told his wife ‘So be it’. For that purpose he performed another very difficult penance with great zeal with me as the object of worship, for number of years. [...]”.

Saṅkaṭa (सङ्कट) is the name of a swan (haṃsa), according to the Kathāsaritsāgara, chapter 59. Accordingly, “... there was in a certain lake a tortoise, named Kambugrīva, and he had two swans for friends, Vikaṭa and Saṅkaṭa. Once on a time the lake was dried up by drought, and they wanted to go to another lake..”.

The story of Saṅkaṭa was narrated in order to demonstrate that “people must follow good advice, otherwise they will be ruined”, in other words, that “a person who lets go common sense will be ruined”.

The Kathāsaritsāgara (‘ocean of streams of story’), mentioning Saṅkaṭa, is a famous Sanskrit epic story revolving around prince Naravāhanadatta and his quest to become the emperor of the vidyādharas (celestial beings). The work is said to have been an adaptation of Guṇāḍhya’s Bṛhatkathā consisting of 100,000 verses, which in turn is part of a larger work containing 700,000 verses.

[«previous (S) next»] — Sankata in Jainism glossary
Source: The University of Sydney: A study of the Twelve Reflections

1) Saṃkaṭa (संकट) refers to a “crowded (with a troop of ruttish elephants)”, according to the 11th century Jñānārṇava, a treatise on Jain Yoga in roughly 2200 Sanskrit verses composed by Śubhacandra.—Accordingly, “This most powerful [and] cruel death devours against their will the life of those who possess a body that has settled in the middle world, in hell, in the world of Brahmā, in Indra’s abode, in the middle of the ocean, inside the forest, at all quarters of the globe, on a mountain-peak, in a place difficult of access on account of fire, forest, cold, darkness, thunderbolts [and] swords, or in [a place] crowded with a troop of ruttish elephants (samadakarin-ghaṭā-saṃkaṭa)”.

2) Saṃkaṭa (संकट) refers to the “difficulty (of battle)”, according to the Jñānārṇava.—Accordingly, “That which is evidently cessation of action causing the cycle of rebirth is to be considered as the mental stopping of the influx of karma by those who know about that from the most excellent scripture. Like the hero who is well-clad in armour is not pierced by arrows in the difficulty of battle (samara-saṃkaṭa), the one who has subdued his senses, whose self is restrained, is not pierced by arrows which are made of non-restraint”.

saṅkaṭa (संकट).—n (S Narrow.) A strait, difficulty, pressing distress; a calamity or trouble in general. saṅkaṭāsamōra ubhā rāhaṇēṃ To stand up manfully against a distress or difficulty; to face a trouble.

sāṅkāṭā (सांकाटा).—m (Commonly sāṅgāḍā) The skeleton, box, or frame (of a building, boat, cart, the body). 2 A frame or texture of sticks (as for the covering of a maṇḍapa or shed, for the flooring of a loft &c.); a crate, a hurdle, or similar thing.

saṅkaṭa (संकट).—n A strait, difficulty; a calamity. a Narrow, straight.

11) [v.s. ...] of a goddess worshipped in Benares, [cf. Lexicographers, esp. such as amarasiṃha, halāyudha, hemacandra, etc.]

Saṃkaṭa (संकट) in the Sanskrit language is related to the Prakrit word: Saṃkaḍa.

1) [adjective] that cannot be passed, crossed or traveled over; impassable; narrow; strait.

2) [adjective] having or posing a problem; difficult; hard to do, manage.