Samvara means something in Buddhism, Pali, Hinduism, Sanskrit, Jainism, Prakrit, Marathi, Hindi. If you want to know the exact meaning, history, etymology or English translation of this term then check out the descriptions on this page. Add your comment or reference to a book if you want to contribute to this summary article.

Alternative spellings of this word include Samvar. 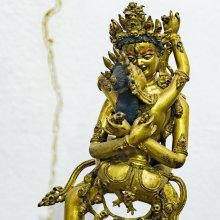 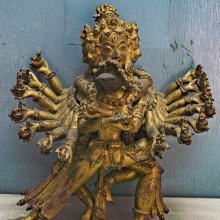 1. Samvara. The youngest of the hundred sons of Brahmadatta, king of Benares. See the Samvara Jataka.

Saṃvara (संवर) refers to the “condition” (e.g., of being a monastic), according to Mahāprajñāpāramitāśāstra (chapter 41).—Accordingly, “[According to the Sarvāstivādin].—[...] Furthermore, if there really was neither past nor future, the condition of being a monastic (pravrajita-saṃvara) would not exist either. Why? As soon as he would be in a bad state of mind (duṣṭacitta) and would break his earlier commitments (śīla), this monk would no longer be a Bhikṣu. And as soon as a saint (āryapudgala) would return in mind to worldly things (lokasaṃvṛti), he would be just an ordinary person (pṛthagjana) since, [according to your hypothesis], there is neither past nor future nor present. [...]”.

Saṃvara (संवर) is the father of Abhinandana, the fourth of twenty-four Tīrthaṅkaras in Janism, according to the Ācāradinakara (14th century work on Jain conduct written by Vardhamāna Sūri). A Tīrthaṅkara is an enlightened being who has conquered saṃsāra (cycle of birth and death), leaving behind him a path for others to follow.

The wife of Saṃvara is is Siddhartha. It is an ancient Jain practice to worship the Tīrthaṅkara’s parents in various rites, such as the pratiṣṭhāvidhi.

1) Saṃvara (संवर) is the name of an ancient king of Ayodhyā and father of Abhinandana, according to chapter 3.2 [abhinandana-caritra] of Hemacandra’s 11th century Triṣaṣṭiśalākāpuruṣacaritra (“lives of the 63 illustrious persons”): a Sanskrit epic poem narrating the history and legends of sixty-three important persons in Jainism.

Accordingly: “Now in the division named Bharata in this continent Jambūdvīpa there is a city, Ayodhyā, equal to Purandara’s city. In each of its houses the moon, reflected in jeweled pillars, attained the beauty of a permanent, handsome mirror. [...] Its king was named Saṃvara, the moon to the Ocean of Milk of the Ikṣvāku family, chosen as husband by the Śrīs of all his enemies. The wealth of the sole king whose command ruled the entire surface of the earth did not leave his treasury, like the sword of a compassionate man its scabbard. [...]”.

2) Saṃvara (संवर) refers to “methods of impeding karma” and represents one of the seven tattvas (principles), according to chapter 4.4 [anantanātha-caritra].—Accordingly, as Anantanātha said:—“[...] Whatever action there is of mind, speech, and body that is āśrava (channel for acquiring karma). Good action is the cause of a good āśrava; bad action is the cause of a bad āśrava. The source of blocking of all channels is saṃvara. Nirjarā is the destruction here of karmas that are the sources of existence. [...]”.

3) Samvara (सवर) is the name of an ancient Ācārya, according to chapter 6.1 [kunthusvāmi-caritra].—Accordingly:—“[...] One day, feeling extreme disgust with existence, he went to Ācārya Samvara, and took initiation, which was like the boundary of the ocean. Observing strict vows, he acquired the body-making-karma of a Tīrthakṛt by means of the sthānakas, devotion to the Arhats, etc. In the course of time he died, possessing right belief and engaged in concentrated meditation, and became a god in the palace Sarvārthasiddha”.

2a) Saṃvara (संवर) refers to the “stoppage (of inflow of Karmas)” and represents one of the twelve pure reflections (bhāvanā), according to the Praśamaratiprakaraṇa 149-50 (p. 93-4).—Accordingly, “(A monk) should reflect, upon transcient [sic] nature of the world, helplessness, loneliness, separateness of the self from non-self, impurity (of the body), cycle of births sand [sic] rebirths, inflow of Karmas and stoppage of inflow of Karmas (saṃvara-vidhi); Shedding of stock of Karmas, constitution of the universe, nature of true religion, difficulty in obtaining enlightenment, which are (called) twelve pure Bhāvanās (reflections)”.

2b) Saṃvara (संवर) or “stopping” (of karmic influx) also represents one of the twelve themes of contemplation (bhāvanā), according to the Jain Yogaśāstra (vol. 2, p. 839).—Accordingly, “Equanimity is attained through the state of non-attachment. In order to attain that [state of non-attachment], one should cultivate the twelve themes of contemplation: on impermanence, helplessness, the cycle of transmigration, solitude, the distinction [of the Self and the body], the impurity [of the body], the influx of karmic matter, the stopping [of karmic influx] (saṃvara), the elimination of karmic matter, the correctly expounded law, the universe, and the [difficulty of attaining] enlightenment”.

saṃvāra (संवार).—m Contraction. Compression (of the lips &c.) in pronunciation.

7) (With Jainas) Shutting out the external world.

2) Contraction of the throat &c. in the pronunciation of letters, obtuse articulation (opp. vivāra q. v.).

(-raḥ) 1. The name of a demon. 2. Collection, comprehension. 3. Contraction, compression. 4. A mound a bridge, &c. 5. Concealing. 6. A kind of deer. E. sam before vṛ to choose, aff. ap; more usually derived from śamb or ṣamb to collect, and then written śambara or ṣambara q. v.

10) [v.s. ...] compression or contraction of the throat or of the vocal chords (in pronunciation), obtuse articulation (opp. to the vi-vāra q.v., and regarded as one of the Bāhya-prayatnas), [Pāṇini 1-1, 9 [Scholiast or Commentator]]

Verse 9.2 - The means to attain saṃvara (stoppage of karmas) < [Chapter 9 - Stoppage and Shedding of Karmas]

Chapter 5 - Cakrasaṃvara < [Book 7 - The preaching of the Tantras]

Part 17: Kanakamālā and Pradyumna < [Chapter VI - Marriage of Kṛṣṇa with Rukmiṇī and others]