Samantabhadra means something in Buddhism, Pali, Hinduism, Sanskrit, Jainism, Prakrit, the history of ancient India. If you want to know the exact meaning, history, etymology or English translation of this term then check out the descriptions on this page. Add your comment or reference to a book if you want to contribute to this summary article. 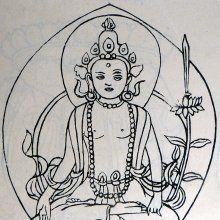 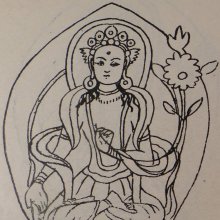 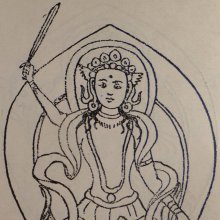 Samantabhadra (समन्तभद्र).—A Jain scholar of great repute who is believed to have written, besides many well-known religious books such as आप्तमीमांसा गन्धहस्तिभाष्य (āptamīmāṃsā gandhahastibhāṣya) etc. on Jainism, a treatise on grammar called Cintamani Vyakarana.

Samantabhadra (समन्तभद्र) is the name of a Bodhisattva who is praised by the Buddhas, according to the 2nd century Mahāprajñāpāramitāśāstra chapter XLVII.—Accordingly, “the Buddhas praise these Bodhisattvas. Who are they? They are, for example, Wen-chou-che-li (Mañjuśrī), P’i-mo-lo-kie (Vimalakīrti), Kouan-che-yin (Avalokiteśvara), Ta-che-tche (Mahāsthāmaprāpta), Pien-ki (Samantabhadra). These leaders among the Bodhisattvas appear in the threefold world (traidhātuka), create for themselves innumerable bodies by transformation, enter into saṃsāra and convert beings. From such exploits (adbhuta) comes the entire very profound prajñāpāramitā”.

Samantabhadra (समन्तभद्र) is the name of a Bodhisattva mentioned as attending the teachings in the 6th century Mañjuśrīmūlakalpa: one of the largest Kriyā Tantras devoted to Mañjuśrī (the Bodhisattva of wisdom) representing an encyclopedia of knowledge primarily concerned with ritualistic elements in Buddhism. The teachings in this text originate from Mañjuśrī and were taught to and by Buddha Śākyamuni in the presence of a large audience (including Samantabhadra).

1) Samantabhadra (समन्तभद्र) is the name of the Bodhisattva offspring associated with Vairocana: one of the Dhyāni-Buddhas, according to Vajrayāna or Tantric Buddhism.—His colour is white; and his symbol is the cakra.—The Dhyāni Buddhas are the progenitors of the different families and they have each a spiritual consort and spiritual son. These spiritual sons are called the Bodhisattvas. The Bodhisattvas bear the same colour, and the same recognition symbol whether they sit or stand. The Bodhisattva with the Cakra symbol is Samantabhadra and is thus affiliated to the Dhyāni Buddha Vairocana with the Cakra symbol. He belongs to the Tathāgata Kula. When represented, he either stands erect or sits in different sitting attitudes, such as Dhyāna, Lalita or Bhadra poses on a full-blown lotus. He usually holds the stem of a lotus on which the family symbol, the Cakra, is shown

2) Samantabhadra (समन्तभद्र) (“Universal Goodness”) is the name of a Bodhisattva commonly depicted in Buddhist Iconography, and mentioned in the 11th-century Niṣpannayogāvalī of Mahāpaṇḍita Abhayākara.—His color is yellow and blue; his symbol is the jewel.—Samantabhadra is popular both in Tibet and China where his images are frequent and numerous. Although images of Samantabhadra are not rare in India, the bulk of his images are to be met with in China, At least five images of the Bodhisattva are found in Peiping alone.

Samantabhadra is described several times in the Niṣpannayogāvalī as follows:

Samantabhadra is described in the Sādhanamālā (in the Lokanātha-sādhana) as follows:

“Samantabhadra is of yellowish colour, holds the jewel on a lotus and exhibits the Varada-mudrā in his two hands”.

“Samantabhadra is one-faced and two-armed and sits in the Vajraparyaṅka attitude on a lotus. He exhibits the Varada pose with his right hand, and holds the stem of a lotus against the chest with his left”.

The names of the 108 deities [viz., Samantabhadra] possbily originate from a Tantra included in the Kagyur which is named “the 108 names of Avalokiteshvara”, however it is not yet certain that this is the source for the Nepali descriptions.Source: Wisdomlib Libary: Vajrayogini

Samantabhadra (समन्तभद्र) is the name of a deity to be contemplated upon by a practicioner purifying his correspondences (viśuddhi), according to the 12th-century Abhisamayamañjarī. Samantabhadra is alternatively known by the name Aiśvaryavajra because he bestows all powers. The contemplation is prescribed as a preliminary ritual for a yogin wishing to establish, or reestablish the union with a deity.

Samantabhadra is associated with all the sense fields and the color pure white. He is to be visualised as holding an attribute in his right hand and a bell in his left. The deities of the sense organs and fields are the esoteric equivalents of the deities associated with the skandhas.

Samantabhadra (समन्तभद्र) is the name of a Vīra (hero) who, together with the Ḍākinī named Samantabhadrī forms one of the 36 pairs situated in the Hṛdayacakra, according to the 10th century Ḍākārṇava chapter 15. Accordingly, the hṛdayacakra refers to one of the four divisions of the sahaja-puṭa (‘innate layer’), situated within the padma (lotus) in the middle of the Herukamaṇḍala. The 36 pairs of Ḍākinīs and Vīras [viz., Samantabhadra] are reddish yellow in color; they each have one face and four arms; they hold a skull bowl, a skull staff, a small drum, and a knife.

Samantabhadra (समन्तभद्र) refers to the third of the “eight Bodhisattvas” (aṣṭabodhisattva) as defined in the Dharma-saṃgraha (section 12). The Dharma-samgraha (Dharmasangraha) is an extensive glossary of Buddhist technical terms in Sanskrit (e.g., aṣṭa-bodhisattva and Samantabhadra). The work is attributed to Nagarguna who lived around the 2nd century A.D.

Also called “Visvabhadra Bodhisattva” or “Universally Worthy Bodhisattva”. Being one of the Four Great Bodhisattvas, he is the Bodhisattva of Great Conduct, representing the Law. He has Ten Great King Vows, which are the guidelines in practising Buddhism, and cultivating the Buddhist Way.

Source: The Art of Asia: Who is Who in HeavenSamantabhadra (Chinese: Pu suien; Japanese: Fugen) Bodhisattva of Universal Goodness/Truth and PracticeSource: academia.edu: The Chronological History of Buddhism

[«previous (S) next»] — Samantabhadra in Jainism glossary
Source: academia.edu: The epoch of the Mahavira-nirvana

Samantabhadra.—(Ep. Ind., Vol. III, p. 199), prosperous on all sides. Note: samantabhadra is defined in the “Indian epigraphical glossary” as it can be found on ancient inscriptions commonly written in Sanskrit, Prakrit or Dravidian languages.

Samantabhadra (समन्तभद्र).—a Buddha or the Buddha.

Samantabhadra is a Sanskrit compound consisting of the terms samanta and bhadra (भद्र).

(-draḥ) A Jina or Budd'ha. E. samanta every way, and bhadra auspicious.

Part 3d.2b - The Perfect Time < [B. The explanation of the kayas and wisdoms]

D. So that merit may increase, adornments of auspicious verses are composed < [Chapter XIV - Conclusion]